After three consecutive quarters with increasing net assets, this quarter ended with a decline, according to new figures from the statistics Foreign assets and liabilities. Both assets and liabilities contributed to the decrease, with a decline in the former and increase in the latter. Viewed in a longer perspective, net assets abroad are still larger than twelve months ago; NOK 791 billion1 higher to be exact. The total stock of liabilities has not changed much in this period. Almost all of the increase in net assets over the last twelve months can be attributed to increased assets.

Appreciation of the krone

As shown in figure 1 below, other changes play a significant role in the development of net assets. The last time net lending was bigger than other changes was in the 2nd quarter of 2016. In the 3rd quarter of 2017, NOK 168 billion of a total decrease of NOK 193 billion in net assets can be traced back to other changes.1 The main cause of this was an appreciation of the Norwegian krone during the quarter. The stronger krone will reduce the value of investments in foreign currency (nominally), measured in NOK. The securities markets had another good quarter and contributed positively to other changes, making it less negative than it otherwise would have been. The remaining decrease of NOK 25 billion1 is net lending, which can be seen in the balance of payments. 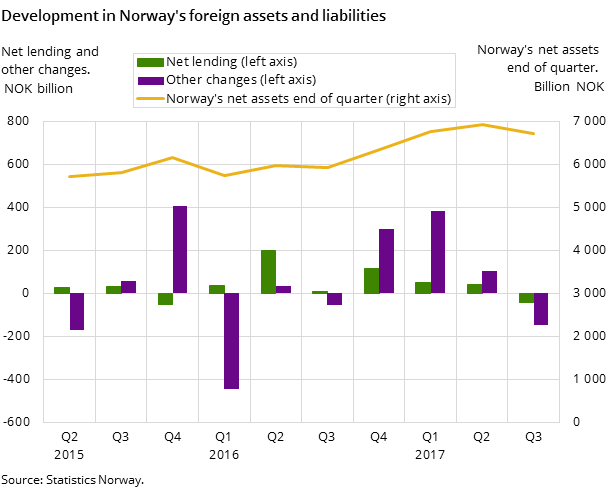