Preliminary figures show that the balance of goods and services in the third quarter of 2020 ended at NOK -20 billion. This is an all-time low. The trade deficit should be seen in the light of the corona pandemic. Both exports and imports are reduced significantly.

The economic development in the third quarter is characterized by the ongoing corona pandemic. Preliminary figures show a significant deficit on the goods and services balance. Both exports and imports are affected by the downturn: if we sum up exports for the first three quarters of the year and compare them with the exports for the first three quarters in 2019, we see a decline of more than 15 percent. The total export deficit is particularly characterized by lower export revenues from oil and gas exports, and this, together with so called “travel” (residents purchases abroad when travelling), account for about 801 per cent of the decline in exports. The same calculation for the import side shows that travel accounts for almost 901 percent of the import decline.

The export value of goods and services in the third quarter of 2020 is currently estimated at NOK 255 billion. This is almost NOK 49 billion lower than in the same quarter last year but NOK 16 billion higher than in the second quarter of 2020. Low oil prices and travel restrictions led to low export revenues, as they did in the previous quarter.

Total imports are estimated at almost NOK 277 billion for the third quarter of 2020, about NOK 40 billion lower than in the third quarter of the previous year but NOK 17 billion higher than in the second quarter of 2020. The decline is primarily due to the drop in services trade, especially Norwegian consumption abroad, which fell by more than 87 per cent measured against the same quarter the year before, because of travel restrictions. This amounts to about NOK 39 billion. 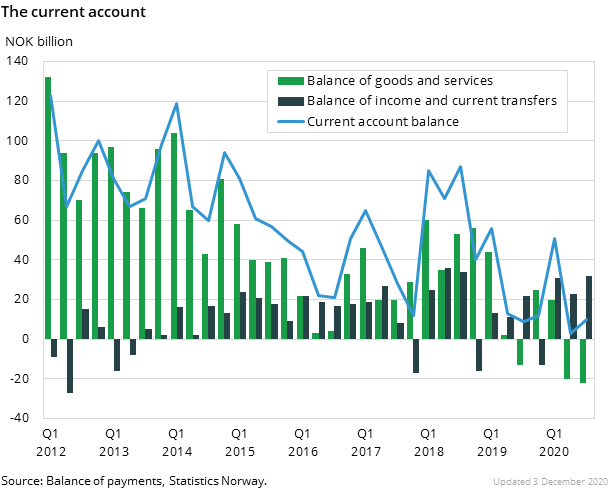 At the end of the third quarter of 2020, Norway’s net foreign assets amounted to NOK 9,554 billion. This was an increase of NOK 316 billion from the previous quarter. 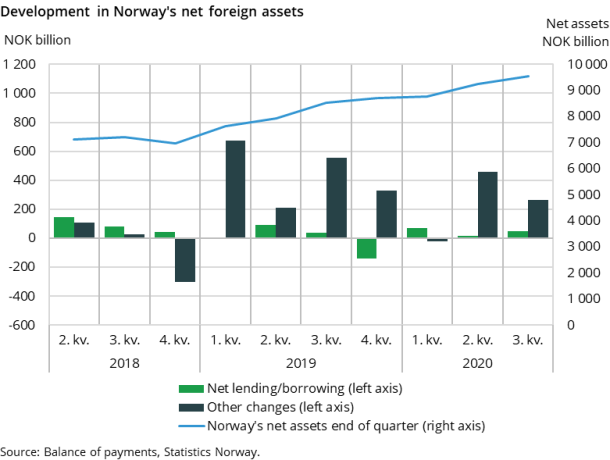 During the third quarter of 2020, the global stock markets had an upswing, and the rise in market prices highly contributed to the increase in the value of Norway’s assets abroad. This applied especially to Norwegian portfolio investment. At the end of the quarter, portfolio investment abroad amounted to NOK 12,840 billion. This was a rise of NOK 309 billion from the previous quarter, consisting mostly of revaluations due to market price changes.

The Norwegian krone appreciated against several foreign currencies during the last quarter, compared to the end of the previous quarter. Other changes were therefore affected negatively due to exchange rate changes.

Net lending had little impact on the rise of net foreign assets in the third quarter. Norwegians reduced their investments abroad by NOK 1 billion during this quarter, and at the same time reduced their liabilities towards the rest of the world by NOK 50 billion, resulting in a net lending of NOK 49 billion.

Many parts of the economic statistics have been affected by the corona pandemic, and the uncertainty is unusually high. However, the international accounts have been less affected. Providers of primary data have been able to collect the necessary information according to the planned schedule, and the data quality seems satisfactory. The uncertainty about the foreign accounts for the second quarter of 2020 does therefore not seem to be greater than usual.

As of the fourth quarter of 2019, the reporting of country and currency breakdown on equity investment abroad is mandatory. This information is now a basis for the calculation of other changes/revaluations due to exchange rate changes in equity investment abroad, for those valued at market or equity value. This in turn has improved the calculation of investment flows in equity abroad, which has now been revised back to firstt quarter of 2018.

Normally, the Balance of payments is revised back to the base year after the base year change in the national accounts. The reason is, of course, that the figures must be reconciled in the different accounts in order to maintain internal consistency. This makes it easier for users to have an overview, and it also generates less errors in reported figures to international organizations that whom Norway is obliged to report.

In 2020, the base year in the National Accounts Supply and Use Tables changes from 2017 to 2018. This takes place in the third-quarter publication, and we have therefore chosen to do the same in the international accounts. Consequently,  the figures for 2018 and 2019 in addition to the first and second quarters of 2020, are revised in this publication.

Revision of 2018 and 2019:
2018 has been subject to revisions in connection with final figures for the 2018 supply and use tables in the national accounts. The 2019 figures have been recalculated as a result of new information in 2018, but also on the basis of new information from several data sources. This applies to both imports and exports of goods and services that are included in the real accounts, and it applies to salaries and investment income and other transfers that are included in the national accounts' sector accounts.

Export and import
Exports have been reduced by a total of about NOK 8 billion in 2018. It is mainly services that have been revised, and it is especially shipping and services related to transport that are driving the decline. Some service products, such as air transport and FISIM, increase exports for 2018. These are largely the same elements we have in the revision of the current 2019 figures. Exports of goods have only undergone minor revisions, while on the service side it is again ocean transport and supply that causes an upward adjustment, and aviation and FISIM that do the opposite. However, the total net downward adjustment of exports for 2019 is NOK 16 billion.

Imports for 2018 have been adjusted downwards by NOK 6.5 billion. This is mainly due to revision of import of services. It is also a mixture of upward and downward adjustments. On the goods side, it is not easy to point to any one category of goods, but there are new figures from foreign trade statistics which in total give a slight downward adjustment in 2018. For service imports, there is a downward revision of business services, where, among other things, rental of ships and aircraft is located. There is also a downward adjustment for travel, where the preliminary data source has been changed when making final figures. For 2019, there is a stronger downward adjustment of imports of about NOK 10.5 billion. Here, new figures for both goods and services contribute. For the most part it is the same items that are being revised as for 2018.

The balance of income and current transfers has been adjusted upwards by about NOK 32 billion for 2018 compared with published figures. Revenues have been revised upwards and expenses downwards, which both point in the direction of a stronger balance. It is particularly reinvested earnings that have been revised up on the income side and down on the expenditure side, which gives the large revision. In fact, expenses have otherwise been revised up somewhat, but this is being eliminated by the sharp reduction in reinvested profits. For 2019, the effect of revised reinvested earnings is even larger. The downward adjustment of the balance of income and current transfers is close to NOK 50 billion. Of these NOK 50 billion, the revision of reinvested earnings accounts for NOK 34 billion. Other interest and dividends are revised down by NOK 6 billion on the income side and up NOK 10 billion on the expenditure side.

Revision of the first and second quarters 2020:

In terms of income and current transfers, both have been adjusted upwards in the first two quarters of 2020. However, expenses have been revised upwards more than income, and thus the balance of income and current transfer will be more than NOK 8.5 billion lower for the first half of the year than in the last publication. while the current account balance will be NOK 29.5 billion lower for the same period.