In October natural gas at a value of NOK 18 billion where shipped abroad, 11 per cent more than the corresponding month the previous year. A total of 10.3 billion standard cubic meters of natural gas in a gaseous state were exported. An increase of 0.9 per cent, or approximately equal to the level the previous year.

Crude oil exports amounted to NOK 15.4 billion in 2017, 15.6 per cent less than in October 2016. The decrease is caused by lower export volume. A total of 37 million barrels of crude oil were shipped abroad this year, compared to 46.2 million barrels in October 2016. This is a decrease of 20 per cent. The price per barrel of crude oil came to NOK 416, an increase of 5.5 per cent compared to the previous year. 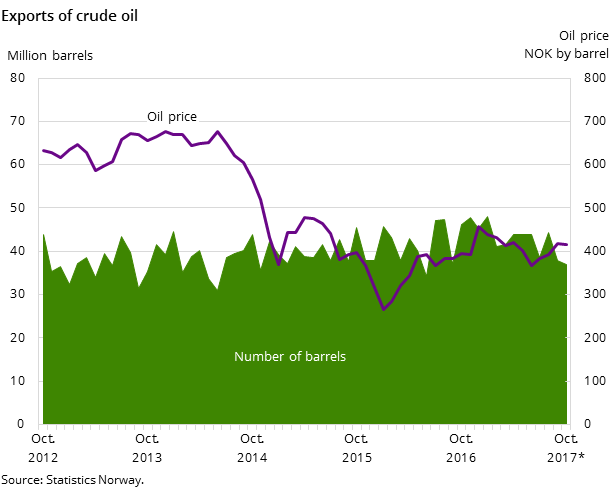 Exports of mainland goods came to NOK 37.5 billion, which is an increase of 21.6 per cent compared to October 2016.

Seafood at a value of NOK 8.8 billion were exported October this year. This is 2.5 per cent less than October 2016 and also the second largest export value ever measured. Less exports of mackerel and herring was a major contributing factor to the drop. The export value of fresh whole salmon increased by almost NOK 50 million. This is 1.1 per cent higher than the corresponding month in 2016. The increase was caused by higher volume, the price has decreased.

Exports of refined mineral oil products increased by 292 per cent compared to October 2016, and amounted to NOK 3.6 billion. The large leap is caused by low exports in the corresponding month in 2016 due to maintenance work.

Chemical products at a value of NOK 4.7 billion were shipped abroad in October, 30.3 per cent more compared to the corresponding month in 2016. All subgroups contributed to the growth.