Norway exported weapons for NOK 2.4 billion in 2015, nearly NOK 600 million more than in the previous year. The product group “bombs, grenades, torpedoes etc." and "ammunition and parts" increased in particular. Norwegian exports of arms in 2015 were still less than in the peak years from 2008 to 2012 when export values totalled between NOK 2.5 and 3.1 billion.

The underlying data in this article are based on customs export declarations and contain all military weapons except for warships and fighters. Further reading (link to various sources for figures for arms exports).

In 2015, exports of arms within the commodity group "bombs, grenades torpedoes etc." came to nearly NOK 1.1 billion. This is an increase of NOK 98 million compared to last year and is the highest export value recorded for this product group. The same applies to exports of goods within the group "ammunition and parts", with an export totalling NOK 523 million; about 50 per cent higher than the year before. 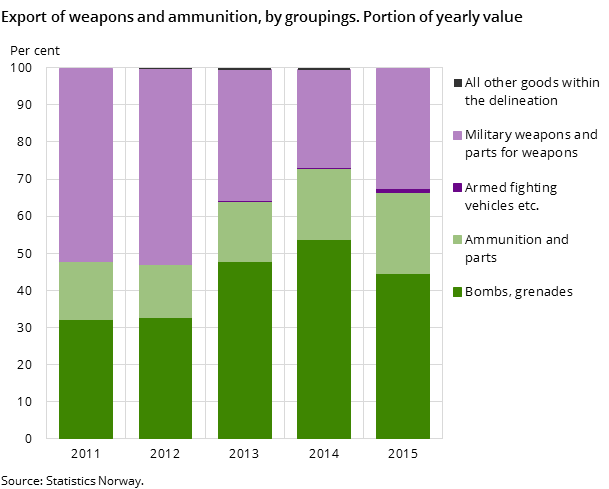 NATO member countries are the main recipients of Norwegian arms

Due to armament agreements etc., exports to individual countries vary a lot from one year to another. The USA has for many years been the largest recipient, and imported Norwegian weapons worth NOK 855 million in 2015. NOK 293 million was for "ammunition and parts", which is an increase from NOK 34 million a year earlier. Poland was a large importer of Norwegian arms, as in previous years. Poland accounted for NOK 333 million, of which NOK 263 million concerned goods within the group "bombs, grenades, torpedoes etc.". In 2015, exports of military equipment to the Netherlands amounted to NOK 119 million. About two-thirds of the value was spent on "military weapons and parts of weapons."

Non-NATO countries imported Norwegian weapons for approx. NOK 776 million in 2015. This is about twice the value as in 2014, but still less than in 2012 when the export value to these countries were particularly high – NOK 1 billion1. Brazil was the largest importer in 2015, buying Norwegian arms for NOK 188 million, while Switzerland and Sweden imported military weapons for NOK 124 and just under NOK 97 million respectively.

With regard to countries in the Middle East, Norway exported weapons to several countries in the region in 2015. The Arab Emirates accounted for NOK 38 million and Kuwait for NOK 16.3 million. There were also some minor exports of arms to Qatar (NOK 641 000) and Saudi Arabia (NOK 58 000). Exports to these countries were for goods within the categories "ammunition and parts" and "military weapons and parts of weapons."

Norway - the tenth largest exporter of arms in 2014

According to newest data in Comtrade, the UN's statistical database for external trade, Norway was the world's tenth largest exporter of arms in 2014. This is a fall from position seven in 2013 (revised figures). Switzerland, Finland, The Czech Republic and Brazil exported more weapons in 2014 than Norway.

Total exports of weapons for all countries worldwide came to USD 12.7 billion. This is around USD 450 million less than in 2013. The figures referred to relate to the value of customs declared export of arms, munitions and tanks.

SIPRI, Stockholm International Peace Research Institute, calculates and ranks the international trade in arms on a broader basis. Newest report can be consulted from SIPRI’s web-site.

Table 1. Export of weapons and ammunition by groupings. NOK Million

The total value of exports of tanks, weapons and ammunition in Statistics Norway’s statistics differs somewhat from the export value of defence equipment stated in the yearly reports to the Storting. As opposed to the definition used by Statistics Norway, the Ministry of Foreign Affairs includes repair trade and trade in services in their export figures for defence equipment, as well as some other commodity groups not included in Statistics Norway’s definition. In addition, the time of recording and errors in customs declarations may have an impact.

Delineation of weapons and ammunition

Statistics Norway compiles figures on exports of weapons from customs declarations submitted by exporters based on the Norwegian customs tariff. The commodity group ‘tanks, weapons and ammunition’ comprises:

1) Commodity group 87.10 in the Harmonized System (HS): Armoured fighting vehicles and parts for such vehicles

Together these two groups comprise the SITC Rev. 3 and 4, group 891 of the UN classification of goods in external trade. The Stockholm International Peace Research Institute (SIPRI) uses a different delineation of weapons and ammunition when they publish their international rankings of weapons export.

The statistics include reported goods exported from Norway as ordinary sales and exclude goods in repair trade. Equipment exchanged under military agreements and equipment for national military personnel on duty abroad is exempt from declaration and hence excluded from the statistics.

Note that the statistics on Norwegian exports of weapons and ammunition are not suppressed due to confidentiality.

Other international figures on weapons export

The Stockholm International Peace Research Institute (SIPRI) publishes figures where the countries of the world are ranked according to the value of their weapons export. The figures differ from those published by Statistics Norway because the data are collected from different sources: Statistics Norway gets its data from reported commodity declarations, while SIPRI uses surveys, media and public documents. The disparity in figures is also due to different definitions, with the SIPRI figures also including war vessels, combat aircraft and technological military equipment.