Norwegian net assets abroad ended at NOK 6 825 billion after the 1st quarter of 2017. This was an increase of NOK 497 billion compared to the end of 2016. Especially assets saw a strong increase due to rising market prices that contributed considerably to the net assets increase.

Net assets abroad continues to increase still after the solid ending of 2016. Only in the last 12 months’ net assets have risen over NOK 1000 billion. In this period liabilities abroad decreased by NOK 31 billion, while assets abroad to compare increased by NOK 1033 billion. The main force in the improved balance is clearly increasing assets abroad.

As one can see from figure 1 below, other changes play as significant role for the development of net assets. Just in the 1st quarter of 2017 one can trace NOK 370 billion of the total NOK 497 billion in increase from other changes. A rather good quarter in the stock markets is the main cause of this large positive contribution. Supplemented by a depreciation of the Norwegian krone, which lead investments abroad in foreign currency to become more valuable when nominated in NOK. The remaining increase of NOK 127 billion are net lending which can be seen in the balance of payments. 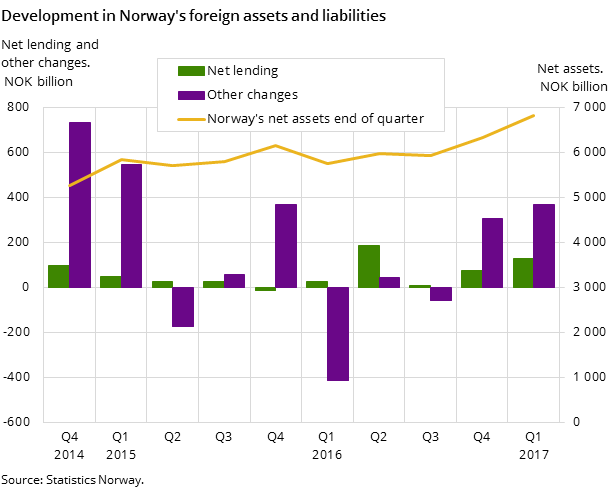