The economic development in the second quarter was strongly affected by the corona pandemic in both Norway and its largest trading partners. This caused disturbances both on the supply and the demand side. The Norwegian kroner was still weak measured against most trade partners currencies’ in the second quarter. The effect of this was a higher value of both the imports and the exports measured in Norwegian kroner; however, low prices on crude oil throughout the quarter greatly affected export revenues and brought the balance of goods and services down to minus NOK 8 billion.

The corona pandemic caused a substantial fall in both income and expenditure abroad in the 2nd quarter of 2020. The main reason behind the decline in income and expenditures was a sharp fall in dividends payments. Many companies abroad and in Norway reversed planned payments of shares dividends as a result of increased uncertainty due to the pandemic. Measured against the same quarter in 2019, dividend income fell by NOK 37 billion. The Government Pension Fund Global plays a major role in this respect receiving NOK 18 billion less in share dividends. However, dividend expenses, i.e. dividends from Norwegian companies to foreign owners, fell by as much as NOK 45 billion. Measured against the 2nd quarter of 2019 the balance of income and current transfers strengthened. In this respect the sharp weakening of the Norwegian krone is also important as this makes the income from abroad larger measured in Norwegian currency. 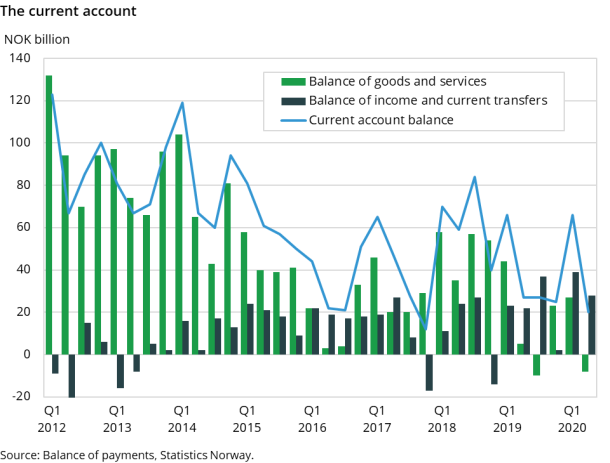 In March, oil prices fell sharply because of reduced demand in general, and increased supply from oil-producing countries. Furthermore, exports of services fell by about NOK 14 billion compared to the same quarter last year. Foreigners’ consumption in Norway, often referred to as “exports of travel” and income from international shipping, both contributed to the decline.

Total imports are estimated at about NOK 264 billion for the 2nd quarter of 2020. This is NOK 50 billion lower than in the 2nd quarter of the previous year. Imports of services is the main contributor to the decline. Imports of services includes imports of “travel”, which is Norwegians’ expenditures when travelling abroad. This fell by more than 95 per cent compared to the same quarter last year because of travel restrictions and amounts to about NOK 37 billion.

Compared to the financial crisis

The coronavirus pandemic has several similarities to the financial crisis in 2008: there was also a sharp decline in the oil price followed by a strong weakening of the Norwegian kroner exchange rate. However, the drop in oil price was significantly steeper then, while at the same time the export of crude oil was over 20 percent higher measured in number of barrels. This gave an even greater fall in the Balance of goods and services. Unlike the financial crisis the import of services is greatly affected due to the fact that Norwegians has little to no consumption related to travelling abroad.

The Balance of income and current transfers were also strengthened during the financial crises as the expenditures fell more than the income from abroad. Norway’s expenditures fell with approximately 40 percent both in the 2nd quarter of 2009 and 2020, compared to the same quarter the previous year. However, since then, the composition of Norway’s assets and liabilities, as well as between loans and stocks, has changed. This is mainly due to the growth of the oil fund and that the oil fund has become relatively more invested in companies. In 2009, the expenditures exceeded the income from abroad; this is no longer the case. Hence, the fall in expenditures in the 2nd quarter of 2020 contributed less to strengthen the Balance of income and current transfers than under the financial crisis. Furthermore, the drop in dividends paid and received contributed the most to the decline in expenditures and income from the abroad in the 2nd quarter of 2020, while during the financial crisis interest paid and received contributed the most.

At the end of the 2nd quarter of 2020, Norway’s net foreign assets amounted to NOK 9,265 billion. This was an increase of NOK 453 billion from the previous quarter. 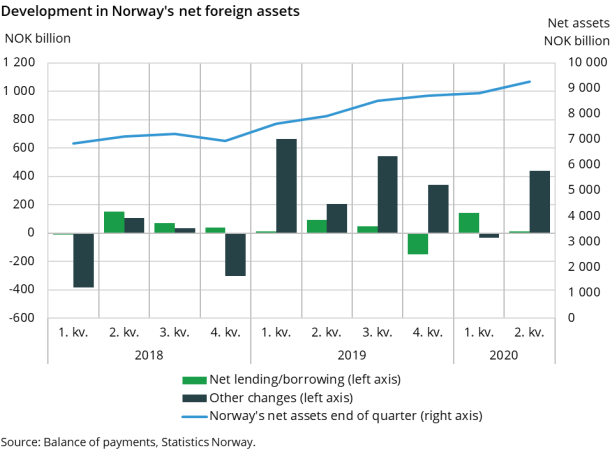 During the 2nd quarter of 2020, the global stock markets had an upswing, and the rise in market prices highly contributed to the increase in the value of Norway’s assets abroad. This applied especially to Norwegian portfolio investment. At the end of the quarter, portfolio investment abroad amounted to NOK 12,563 billion. This was a rise of NOK 513 billion from the previous quarter, consisting mostly of revaluations due to market price changes.

The Norwegian krone appreciated against several foreign currencies during the last quarter, compared to the end of the previous quarter. Other changes were therefore affected negatively due to exchange rate changes.

Net lending had very little impact on the rise of net foreign assets in the 2nd quarter. Norwegians reduced their investments abroad by NOK 117 billion during this quarter, and at the same time reduced their liabilities towards the rest of the world by NOK 129 billion, resulting in a net lending of NOK 12 billion.

Many parts of the economic statistics have been affected by the corona pandemic, and the uncertainty is unusually high. However, the international accounts have been less affected. Providers of primary data have been able to collect the necessary information according to the planned schedule, and the data quality seems satisfactory. The uncertainty about the foreign accounts for the second quarter of 2020 does therefore not seem to be greater than usual.

Current account is revised back to the 1st quarter of 2020.

Financial account and IIP are revised back to the 1st quarter of 2019.