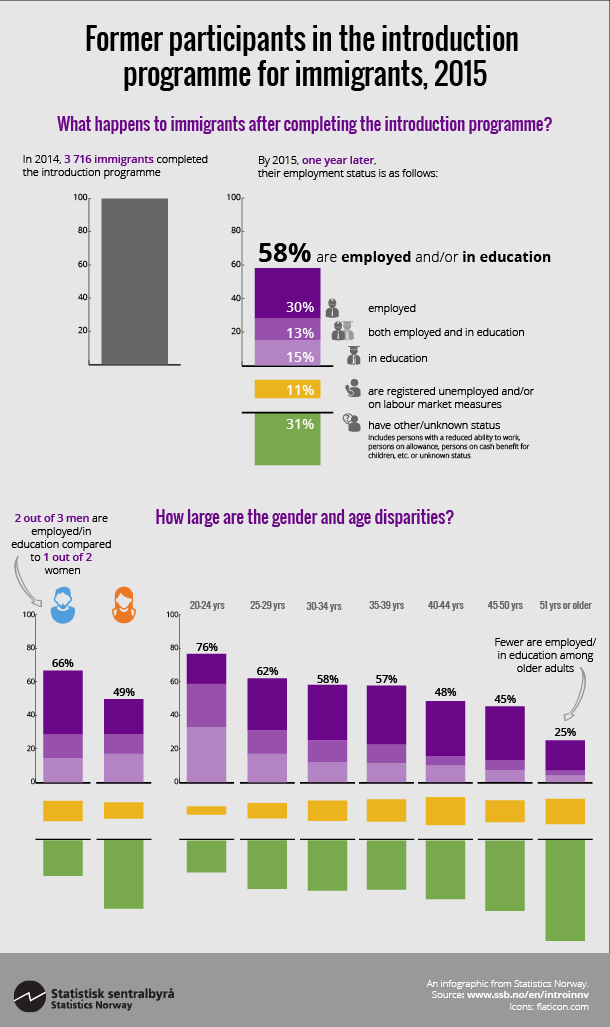 Beginning in 2015, data on employment are partially based on a new database, and this makes comparison with earlier figures on employment difficult (read more in the text box in the bottom of this article).

In 2010, a national target was introduced of at least 70 per cent in employment or education within one year of completing the programme.

More men than women in employment or education

As in previous years, there are major gender disparities in the outcomes of programme participants. Sixty-six per cent of the men and 49 per cent of the women were in work and/or education one year after taking part in the programme.

Twelve per cent of the men and 10 per cent of the women were registered as unemployed or on employment initiatives, while far more women than men were in the category other or unknown status: 41 and 21 per cent respectively. Among the women, it is mainly recipients of social assistance (11 per cent) and those with so-called unknown status (15 per cent) who dominate. In other words, no data is available for one in seven women, many of whom are assumed to be at home with children. This main category also includes those in primary and lower secondary education who do not additionally have a part-time job, do not receive cash benefit for children or are not otherwise covered by any of the aforementioned categories.

Three in four under 25s are in employment or education

Women are less likely than men to be in employment or education after the programme. One possible reason is that many of the participants on the introduction programme are in a period of their life where they have children or are at home with young children. The gender disparity is by far greatest among young adults aged 25 to 39 years: about 20 percentage points.

Among the eight countries with most former participants who completed the programme in 2014, those with a background from Ethiopia and Eritrea had the largest share in employment or education one year after either completing or leaving the programme, with 71 and 68 per cent respectively. Participants from Iran and Myanmar followed with 69 and 59 per cent. At the other end of the scale are those from Somalia and Iraq, where under half were in employment or education (46 and 48 per cent respectively).

Seven in ten in employment or education in several municipalities

The municipalities with the most former participants in 2014 were Oslo, Bergen, Trondheim, Kristiansand and Tromsø. In Oslo and Bergen, 52 and 60 per cent were in employment or education respectively in 2015. The corresponding figures were 64 and 65 per cent in Trondheim and Kristiansand, and 70 per cent in Tromsø.

The majority of the former participants in Oslo were women, while in Bergen it was the men who dominated. In Oslo, 64 per cent of the men found work or went into education, and the corresponding figure for Bergen was 69 per cent. Men in both cities are thus slightly below the male national average. Among the women who participated in the introduction programme in the two cities, the share in work and education after one year is considerably lower than the average for women in Norway: 42 per cent in Oslo and 48 per cent in Bergen, compared with 50 per cent for all women.

The statistics is commissioned by the Ministry of Justice and Public Security and Social Inclusion and the Directorate of Integration and Diversity (IMDi).

How to use the System for personal data (SFP)

Data on education and employment is taken from the System for personal data (SFP), where information from a number of registers is collected. Register data is from November each year and contains information about whether a person is employed, registered unemployed, on an employment initiative, in education, or can be linked to any type of government benefits or initiatives. A person may have more than one status on the reference date, for example, both in employment and in receipt of benefit. This article has focused on examining how many people are in activity, and we have considered the activities of employment and education, in addition to the combination of these activities. The following ranking applies: if a person is registered as unemployed, but is also in education, they are considered to be in education and not unemployed. As regards the other statuses, such as health-related benefits and social assistance, there are many who receive these in combination with employment, education or registered unemployment. In such cases, work and other activity, as well as registered unemployment are ranked the highest.

Status in the labour market

The category ‘In employment/education’ is made up of persons registered as employed, registered as in education and registered with a combination of employment and education. In employment refers to persons who performed paid work of at least one hour during the reference week, as well as persons who had such work but were temporarily absent because of illness, holiday leave, paid leave or similar. The category ‘Registered unemployed/on an initiative’ is made up of those who are registered as unemployed with NAV and those participating in general labour market initiatives. ‘Other or unknown status’ is a collective term for the weakest degree of labour force attachment. Other status encompasses persons with a reduced ability to work who are on initiatives arranged by NAV, persons who are long-term sick and recipients of social assistance. Unknown status means that they are not registered in any of the available data sources we use in the status reporting for labour market attachment. These persons are therefore not in employment or education, or registered unemployed or participating in labour market initiatives.

Beginning in 2015, data on employment are partially based on a new database, and this makes comparison with earlier figures on employment difficult. From 2015 onwards a new joint reporting solution called a-ordningen gathers the reporting from the employers to the Ee-register, produced by the Norwegian Labour and Welfare Administration, as well as some reports to the Tax Administration and Statistics Norway. A-ordningen is a coordinated digital collection of data on employment, income and tax deductions to the Tax Administration, the Norwegian Labour and Welfare Organization and Statistics Norway. This new joint collection provides Statistics Norway with information on wages and employed persons directly from a-meldingen, which is the electronic message containing all the information collected, rather than the multiple sources used until 2014. You can find more information about the new reporting at www.altinn.no/en/a-ordningen. Read more about the change in the time series in the statistics “Employment, register-based, 2015, 4th quarter”.