In the academic year 2000/01 almost 13,200 students with Norwegian citizenships were studying abroad, approximately 7 per cent of all students studying in Norway. Three years earlier the corresponding figures were 10,200 and 6 per cent. These figures are presented in the OECD publication "Education at a Glance 2003".

The other Nordic countries, except Iceland, had a smaller portion of students participating in tertiary education abroad. Iceland had a portion of 24 per cent while Sweden, Finland and Denmark had 4, 3 and 3.5 per cent. Most students with Norwegian citizenships were enrolled in the United Kingdom, Australia and the USA. The number of students abroad is calculated through collected data by host countries, including most OECD countries and some non-OECD countries. 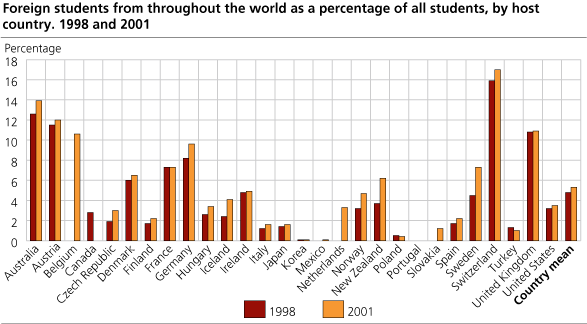 The student mobility among countries does not distinguish between foreigners living permanently in the country and foreigners pursuing an education only. In Norway, data on both domestic and foreign students are collected at a certain reference date, excluding some educational exchange programmes.

Student mobility pattern may be attributed to a variety of push-pull factors, such as language barriers, academic reputation of particular institutions or programmes, flexibility of programmes with respect to counting time spent abroad towards degree requirements, limitations of tertiary education provision in the home country, restrictive university admission policies at home, financial incentives and tuition costs.

For all OECD countries, except Mexico and Belgium, the female portion of those awarded advanced research degrees has increased compared with the academic year 1997/98. In Norway more women than men complete an education at the upper secondary and at the tertiary level of education, but more men than women are awarded advanced research degrees. The female portion in Norway is below the country mean of all OECD countries. The female portion was 34 per cent in Norway whereas the country mean in the OECD was 38 per cent in 2000/01.

The educational attainment, among persons aged 25-34, in all OECD countries has increased over the decade 1991-2001. The largest increase is found in Ireland, where 20 per cent of the 25-34 year-olds had attained education at the tertiary level in 1991. In 2001 the corresponding portion was 48 per cent, an increase of 28 percentage points. The largest portions of 25-34 year-olds having attained tertiary education are found in Canada, Ireland and Japan with 51, 48 and 48 per cent.

In Norway 27 per cent of 25-34 year-olds had attained tertiary education in 1991. In 2001 the portion was 38 per cent. Belgium, Finland, Korea, Sweden and the USA had portions equivalent to Norway.

1   1999/00-figures. In Iceland few students are awarded advanced research degrees per academic year, and the female portion is influenced accordingly.

Table 1 Proportion of foreign students in tertiary education in the Nordic countries of study. 1998 and 2001