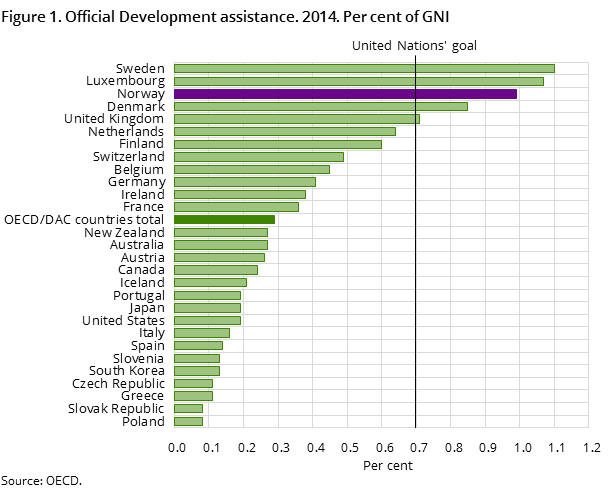 Figures from the OECD show that the development assistance share from the DAC countries fell from 0.30 per cent to 0.29 per cent of GNI from 2013 to 2014. On the other hand, the level of development aid in volumes increased by approximately USD 100 million during the same period.

Falling short of the UN’s target

Development assistance comparisons as a percentage of GNI are often used to measure countries’ expenditure on foreign aid. In 1970, the UN resolved that development aid should account for 0.70 per cent of GNI. Norway, Sweden and Denmark achieved this goal relatively quickly in the 1970s. However, in 2014, only the three Scandinavian countries, the United Kingdom and Luxembourg achieved the target.

USA by far the largest contributor

With USD 31.5 billion in development assistance, the USA was by far the largest contributor when comparing monetary values. Following the USA, the largest contributors were the United Kingdom, Germany, Japan and France. These five countries contributed approximately USD 87.9 billion in development assistance, which is 65 per cent of the total for the DAC countries.