This statistics has been discontinued. Consult the statistics Domestic transport performances,  Transport and communication in municipalities and county authorities and Construction cost index for road construction , together with The Norwegian Public Roads Administration.

The Norwegian Public Roads Administration´s total expenditure on state roads constituted NOK 33.2 billion in 2013; an increase of 27 per cent from 2012. 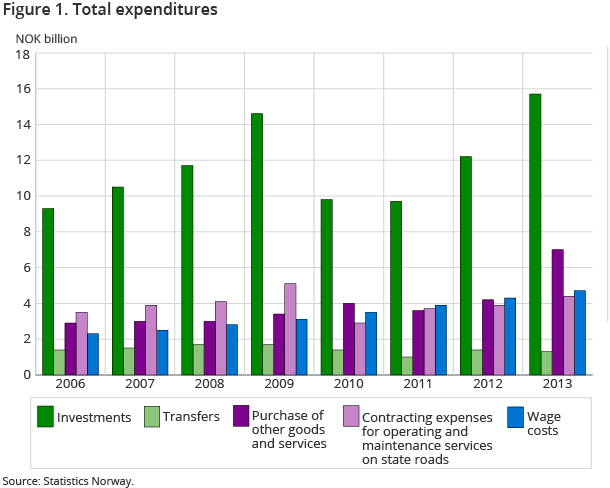 In order to achieve the government´s goal to reduce the number of people injured or killed in road traffic accidents, promotional measures separating the traffic are also crucial to reducing the number of head-on collisions and vehicles running off the road. About 10 kilometres of four-lane state roads were opened for traffic in 2013, i.e. the same level as the year before but only half the volume compared to 2011. Additionally, 21 kilometres of central barriers were built on two and three-lane state roads in 2013. This was also somewhat less compared to 2012, but the width of the road has become a limiting factor for further building/expansion. However, the number of kilometres of rumble strips was doubled in 2013 compared to the two previous years. A total of 150 kilometres of state roads were marked with these strips in 2013.

While the national emissions of greenhouse gases have been reduced by 6 per cent in total from 2007 to 2013, the corresponding emissions from road traffic are only slightly lower (1.1 per cent). As a result, the road traffic´s share of the total greenhouse gas emissions increased by 1 percentage point to 19 per cent in this period, and constituted 10.1 million tonnes in 2013 measured in CO 2 equivalents . The NOX emissions from road traffic came to 35 400 tonnes in 2013; a decrease of 2.5 per cent from 2012 and 27 per cent compared to 2007. As a comparison, the total national emissions of NOX were reduced by 19 per cent in the period 2007-2013.

The statistics give an overview of the amount of resources the Public Roads Administration spends on road and road traffic, and the results of the effort.