Slight decline in transport by lorry

Transport performance carried out by lorries decreased by 1.3 per cent and ended at 21 billion tonne-kilometres from 2015 to 2016, according to new figures from the statistics Road goods transport by Norwegian lorries. The transported freight volume decreased by 0.7 per cent. 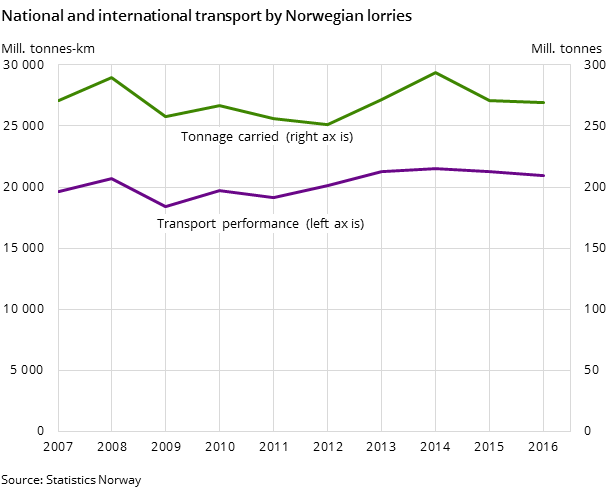 In total, Norwegian lorries drove almost 200 million kilometres less than in 2015. Of a total of two billion kilometres driven in 2016, 1.4 billion were driven with load. This means that 27.7 per cent of the distance travelled were done without a load, an increase of 3.4 percentage points from the previous year.

A new sample method was introduced in the 3rd quarter of 2015, and in the 1st quarter of 2016 a new questionnaire was launched and new estimation routines were adopted. These changes can affect comparability between some variables such as tonnes and tonnes-kilometres, commodity distribution and distribution between transport for hire or reward and transport for own account driving.