One in three kms is driven with an empty load

Norwegian lorries transported 116.6 million tonnes of goods domestically and abroad in the first half of 2017. About 30 per cent of the mileage in Norway was empty driving, i.e. driving with no load on the lorry.

Almost 30 per cent without a load

The total vehicle-kilometres driven in Norway was 0.9 billion, and 86.5 million kilometres abroad in the first half year. Almost 30 per cent of the mileage in Norway was empty driving, i.e. driving without a load. This is about the same percentage as in the first half of 2016. Since the composition of goods on foreign trips normally differs from that on domestic trips, the share driven without a load is markedly lower on foreign trips. In the first half of 2017, it was just over 20 per cent. 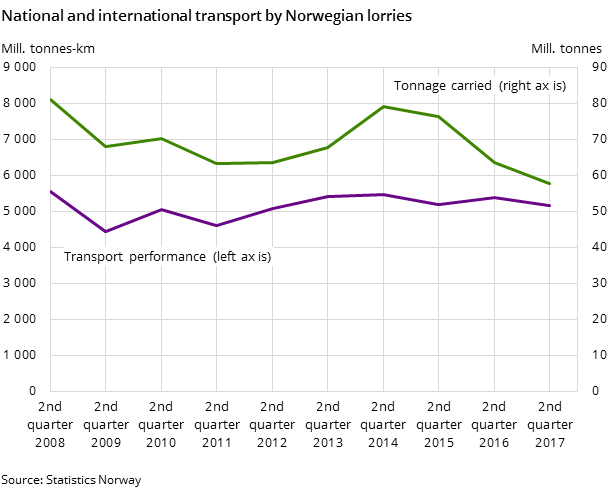 A new sample method was introduced in the 3rd quarter of 2015, and in the 1st quarter of 2016 a new questionnaire was launched and new estimation routines were adopted. The principles for recording collection and distribution trips were also amended in accordance with international recommendations in 2016, and this change is also made for 2015. All of these changes will to some extent affect the comparability of the quarters for individual variables, such as tonnes and tonne kilometres, distribution of goods and distribution between hire and transport for own account. The change in the processing of round trips will affect the comparability between 2015 and earlier. Consequently, time series must be interpreted with some caution, but the changes nevertheless still enable comparisons of the main features of the development of transport performance for lorries over time. See more information about the changes in About the statistics.