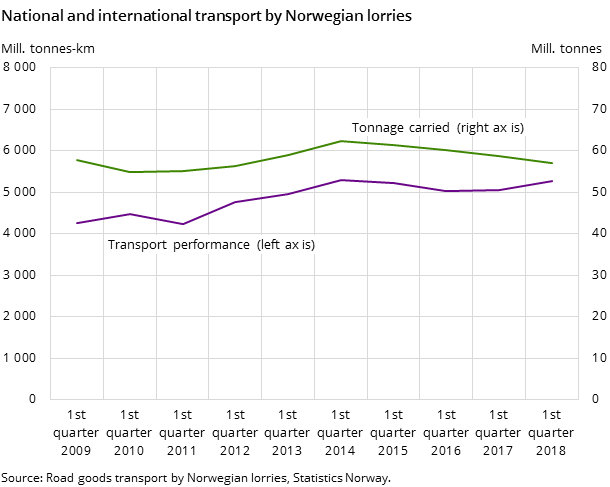 In the 1st quarter of 2018, Norwegian lorries carried 55.8 million tonnes of goods domestically. This is 3.0 per cent less than in the 1st quarter of 2017. The tonnage carried, related to exports and imports was almost unchanged during the same period, and constituted 1.2 million tonnes. Domestically, it was especially the mass transport that contributed to the decrease in transport carried, with a decrease of 4.6 per cent from the same quarter last year. The timing of Easter may have contributed to this decline since the entire Easter holiday this year was in the 1st quarter, while Easter last year was in the second.

Of the total tonnage carried by Norwegian lorries in the 1st quarter this year, 98 per cent was transported domestically. The trips to and from abroad are on average longer, than domestic trips. Consequently, the domestic transport performance represents a smaller proportion of the total than the transported amount. 87.8 per cent of the transport performance was carried out within the first quarter of 2018.

A new sample method was introduced in the 3rd quarter of 2015, and in the 1st quarter of 2016 a new questionnaire was launched and new estimation routines were adopted. The principles for managing of collection or distribution round type were also amended in accordance with international recommendations in 2016, and this change is also made for 2015. All of these changes will to some extent contribute to affecting the comparability of the quarters for individual variables, such as. Tonnes and tonne kilometres, distribution of goods and distribution between hire and transport for own account. The change in round trip treatment will affect the comparability between 2015 and earlier. Consequently, time series must be interpreted with some caution, but the changes are not greater than that you can follow the main features of the development of transport performance for lorries over time. See more information about the changes in About Statistics.