The business enterprise sector performed research and development (R&D) totalling about NOK 29.5 billion in 2016. This is 6.2 per cent higher compared to 2015. Measured in fixed prices, the increase was 3.8 per cent.

After two consecutive years of record growth in business enterprise R&D activity, the preliminary figures for 2016 show a somewhat more moderate increase in 2016. The survey included enterprises with at least 10 employees. Manufacturing industries show a marginal increase of less than 1 per cent, while service industries increased by 9.6 per cent. It may be worth noting that total GDP for Norway shows zero growth from 2015 measured in current prices; for mainland Norway, nominal growth was 3.7 per cent. This means that R&D as a share of GDP is still increasing.

Changes in R&D expenditure compared to 2015 vary by size group, in particular when considering the largest enterprise size groups. However, these variances are to a large degree attributable to changes in the number of employees amongst large R&D performers. 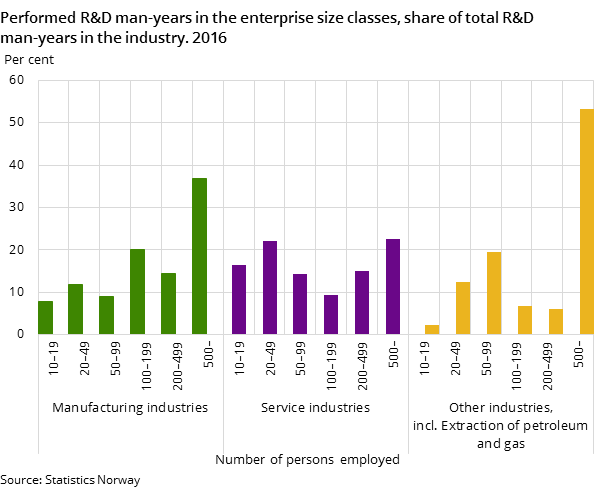 One in four enterprises engage in R&D activities

The proportion of enterprises that perform R&D has remained stable at around 20 per cent for several years, but jumped to 25 per cent in 2015. The results for 2016 show a similar level, with 26 per cent. The growth in the number of R&D-performing enterprises was strongest among small enterprises with less than 50 employees.

Increased use of hired R&D personnel

Service industries account for most of the business enterprise expenditure for hired R&D personnel, with a total of NOK 2.5 billion in 2016. These industries also contributed to the total growth in 2016. Both small and large enterprises seem to be joining this trend.

In addition to performing their own research and development, many enterprises acquired R&D services from other actors. The total expenditures for purchased R&D amounted to NOK 7.0 billion in 2016.

Information on total R&D work in Norway, including universities, colleges and research institutes, is available at www.nifu.no/statistik/foustatistik.

Uncertainty of the results

In the preliminary results published there is uncertainty due to lack of complete reports from some large R&D enterprises. Figures have been estimated. Final figures for 2016 will be published in February 2018.