The business enterprise sector performed research and development (R&D) for about NOK 29.5 billion in 2016. This is 6 per cent higher compared to 2015. At fixed prices, the increase was 4 per cent.

There was a moderate real growth in business enterprise R&D Activity in 2016, compared with record growth over the past two years. This applies to R&D costs, R&D FTE and R&D services purchased.

The final 2016 figures for R&D in the Norwegian business enterprise differed slightly from the preliminary figures published on 17 October 2017. The survey covered enterprises with at least 10 employees.

Enterprises in the service sector have seen significant growth in recent years. This trend continued in 2016. The total spending in R&D within this sector increased by NOK 1.5 billion or 10 per cent compared with 2015. Service industries carried out more than half of all R&D activity in the business enterprise sector. ICT services are the single industry with the most R&D, and have experienced growth of 19 per cent. Other service industries are also showing growth, especially Telecommunications, Agency and Wholesale Trade and Research and Development.

The R&D FTE totalled 19 616 in 2016; 3 per cent more than the year before. In general, R&D personnel in the business enterprise have a high level of education. The proportion of R&D FTEs performed by people with a postgraduate education (master’s degree or higher) is around 70 per cent. This proportion has remained stable over the last ten years. The figures showed that the share of personnel with a postgraduate education is clearly increasing in pace with the size of enterprises in manufacturing industries and in other industries, and this trend is almost as strong in the service industries.

Every fifth person in R&D is female

The gender balance among industry's R&D staff has also been stable for a long time. The proportion of women has only increased by 1 percentage point from around 20 per cent in 2007 to around 21 per cent in 2016. The share is also quite stable within size groups. It is only for the largest enterprises, with at least 500 employees, that this share is clearly higher than the average.

More purchases of R&D services from own enterprise group

Business enterprises bought R&D services from other providers for NOK 7 billion in 2016, an increase of 3 per cent from the year before. More R&D has been purchased from research institutes, universities and colleges in Norway, with an increase of 12 per cent. The companies increased their purchases from Norwegian and foreign companies within their own enterprise group by 11 per cent in 2016. Norwegian business enterprises acquire a big portion of R&D from their own subsidiaries abroad, which have become an important supplier of R&D services. In 2007, these subsidiaries performed 15 per cent of the total purchased R&D services. This share reached 29 per cent in 2016.

What research is being carried out?

The R&D survey provides information on R&D within specified themes in accordance with the Government's long-term research plan. Energy still constitutes the largest area for R&D spending for the most part. In 2016, the investment reached NOK 6.5 billion. Of this, 64 per cent was targeted at R&D in petroleum activities. In the field of environment, R&D was carried out for NOK 1.6 billion, while R&D current expenses of around NOK 558 million were reported for climate research. The business sector also focuses on R&D within the field of food, where NOK 2.3 billion was spent. 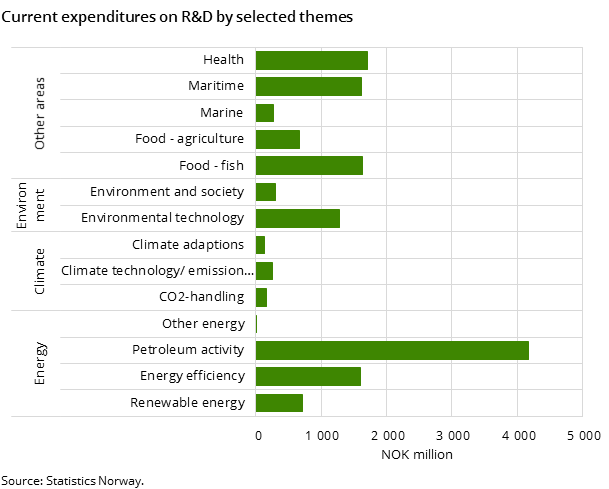 Information on total R&D activity in Norway, including universities, colleges and research institutes, is available at www.nifu.no/statistik/foustatistik.

Uncertainty of the results