In 2015, 9.8 per cent of the population reported that they had been the victim of one or more incidents of theft, damage to property, violence or threats of violence. This share of victims, both in total and for each type of crime, is smaller than in all previous surveys.

The survey on living conditions carried out in 2015 shows that 9.8 per cent of the population aged 16 years or older were the victim of one or more incidents of violence, threats, theft or damage to property. This corresponds to about 400 000 of the adult population being subjected to these types of offences at least once during the course of a year.

General decrease in victims for all types of offences

For nearly all types of offences mapped in the 2012 and 2015 surveys saw a decrease. The biggest decrease was among those who were victims of theft; however violence and threats combined almost saw the same reduction as theft, as shown in figure 1. 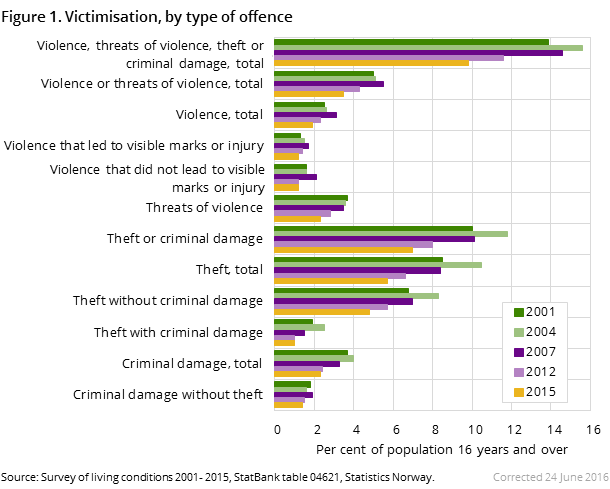 From the surveys carried out in the 1990s and up to 2004, about 10 per cent of the adult population reported having been victims of theft in the course of a year. However, this share has decreased in the last three surveys, and was almost halved to 5.7 per cent in 2015.

In the period 2004-2015, the biggest decrease is among those under 45 years of age, and the fall was roughly equal for men and women. For example, in 2004, over 17 per cent of those aged 16-24 years reported having been a victim of theft during the previous year. The corresponding share for men and women in this age group in 2015 was 7.3 per cent.

In each of the last three surveys, there has been a gradual decrease in victims of theft in all areas of residence. Relative to the 2004 level, the scope of theft victims in 2015 is about halved for the four types of residential areas included in the surveys. In the most sparsely populated areas, fewer than 3 per cent of the population reported having been a victim of theft in 2015. The corresponding share was about 8.5 per cent among those living in areas with a population of 100 000 or more.

Thus, the decrease from recent years has not altered the findings of previous surveys and statistics on offences reported to the police: there is a clear connection between the scope of theft and the population density of an area. The majority of thefts and other types of offences for profit happen in the biggest cities and most densely populated areas, thus making the population in such areas most at risk for these types of offences. 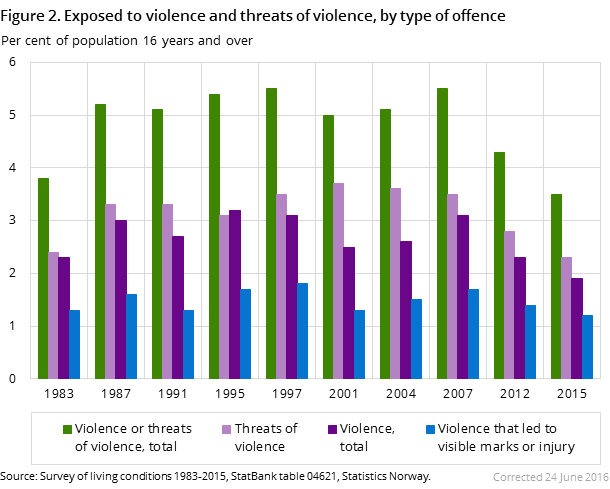 Share of thefts reported to the police remains stable

In Norway, victims (persons) report far more incidents of theft than violence to police. In 2015, 58 per cent of all victims of theft reported the offence to the police, which is about the same share as in 2012 and in 2007. 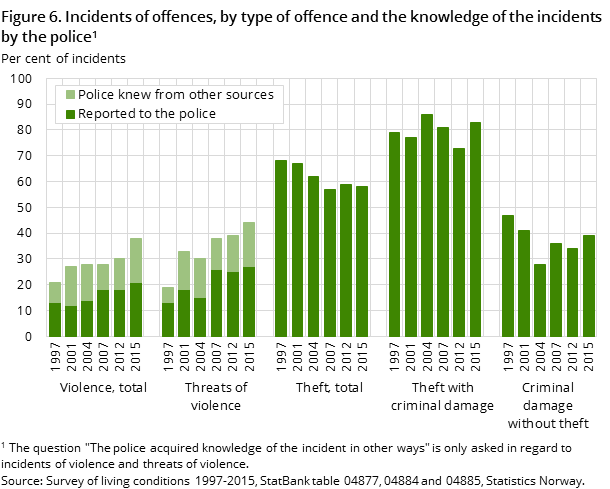 In the 2015 survey, 3.5 per cent of the population aged 16 years or older reported having been the victim of violence or threats of violence at least once in the course of the preceding year. This share is smaller than the 4.3 per cent share in 2012, and represents a significant decrease from the surveys from 1987-2007, when the corresponding shares ranged between 5.0 and 5.5 per cent. 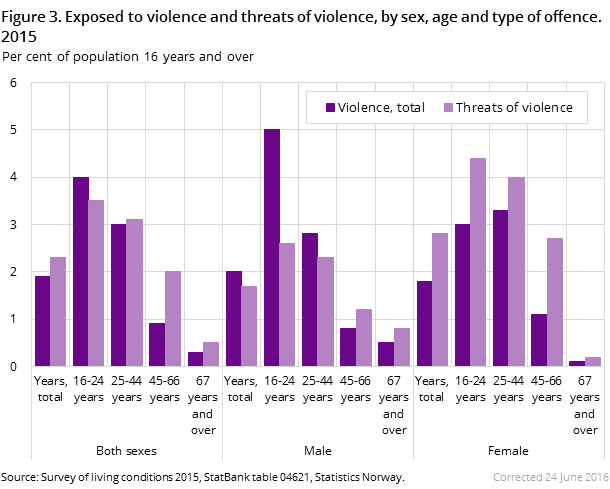 Furthermore, for the first time, the 2015 share is smaller than the first survey on living conditions in 1983, when 3.8 per cent of the population reported having been the victim of violence or threats of violence in the preceding year. In 2015, the share of victims of the grouped types of violence threats are smaller than in all previous years – as shown in figure 2.

A similar development is also notable from the previous years’ statistics on victims of offences reported to the police, where there has been a significant decrease in the share of victims in the adult population. This is mainly due to a decrease in the reported violence among young adults – especially for men and in the wake of a long period of a relatively stable level of violence in the population.

When taking the offender’s age into account for the period 2007-2015, there are clear indications that the general decrease in violence is due to a drop in youth-on-youth violence. In 2015, an offender under 25 years of age was reported in 23 per cent of all incidents of violence, of which 35 per cent of the victims were from the same age group as the perpetrator – as shown in figure 4. However, in the previous two surveys, the youngest offenders were responsible for over 40 per cent of all incidents of violence, and for more than 60 per cent of all violence against victims aged 16-24 years. 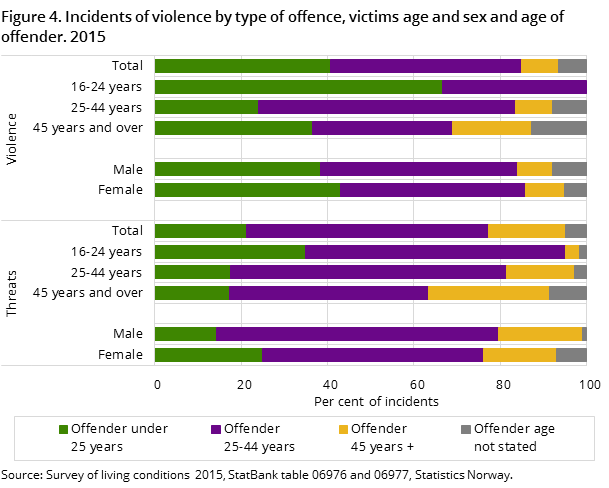 Thus, the level of violence from the 2015 survey is to a greater extent dominated by violence with offenders aged over 25 years. This also means that the share of violence and threats committed by offenders aged over 45 years is greater than in the previous two surveys. A similar development is also registered among offenders reported to the police and charged with violent offences. 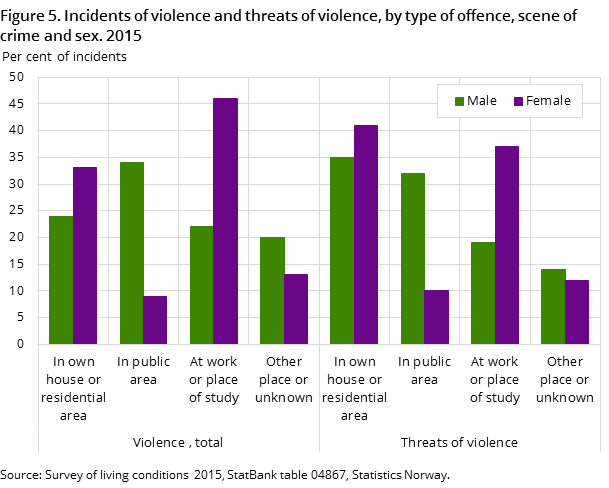 Nearly equal share of victims of violence among men and women

In the 2015 survey on living conditions, 1.2 per cent of the adult population reported having been a victim of violence leaving visible marks or injuries at least once over the course of 12 months. The share of victims of violence leading to injuries has been far more significant for young men, while the youngest women have been more often exposed to threats of violence. Such differences between the sexes and different age groups are still significant in the 2015 survey, although less predominant than in previous surveys – as shown in figure 3.

Repeated victimisation is more common among women than men. Among the victims of violence in 2015, women were on average exposed to 2.2 incidents of violence during a year, while the corresponding share for men was 1.6 incidents. Women aged 25-44 years are particularly exposed to repeated violence or threats of violence, and women in this group on average were the victim of 3 violent incidents during the preceding 12 months. 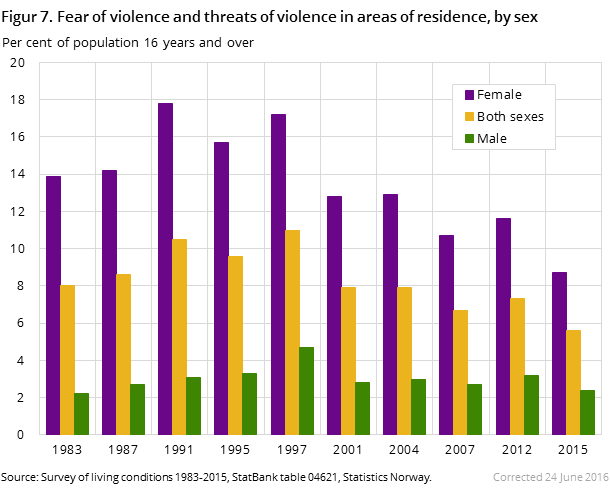 Violence in public, private residences, within families and at work

The survey on living conditions maps types of violence and threats from different circumstances and times of day – and in situations between persons with various types of relationships. Since there has been a decrease in previous years of both the number of victims and incidents of violence – especially among the youngest – the distribution of violence has also changed. In the previous two surveys, about half of all incidents of violence against women happened at work or place of study, while one third took place in private residents or areas – as shown in figure 5. In most surveys dating further back, such incidences of violence against women were predominantly in private residences, and one third were reported as taking place at work.

The fact that women are more exposed to violence at work is also one of the findings of the survey on living conditions, working environment. The significant influence of different family situations on both sexes is mapped in a separate analysis of the surveys of living conditions 1997-2004 (in Norwegian only). This analysis found that the share of victims of violence was higher for singles in all age groups than among similarly aged persons in other family situations. In 2015, a corresponding connection is visible, but the share of victims among single persons is far smaller than before. However, single parents do not seem to have had a decrease, thus making this group stand out even more than previously as particularly exposed to violence.

Men and women still victims of different types of violence

Despite the changes in recent surveys, there are still some significant differences between men and women in what types of violence they are exposed to. As in most previous surveys, the 2015 survey states that men are more often the victim of violence in public places, at night, at the weekend and by an intoxicated offender. Furthermore, violence against men is more often committed by an unknown offender. A far greater share of all incidents of violence against women happen at work or in private residences, and by an offender who is not intoxicated.

Most offenders are men

In 2015, nearly16 per cent of all women aged 16-24 years had recently experienced fear of being a victim of violence or threats. Among men in the same age group, only 2 per cent reported such fears. As opposed to previous surveys, especially from before 2000, the 2012 and 2015 surveys also marked a relatively clear connection between age and fear of violence and threats – now most predominantly among women. The younger a person is, the higher the share that experience a situation in their home area that provokes fear of violence and threats. Despite the fact there are still large disparities between men and women, there is now an even clearer connection between fearing violence and being the victim of violence.

Further decline in fear of theft and damage to property