In 2015, there were 3 per cent fewer penal sanctions than in the previous year. The decrease in sanctions against young people continues, but persons aged between 15 and 24 are still overrepresented for many types of crimes.

In total 291 900 penal sanctions were registered in 2015.1 Of these 73 per cent are on the spot fines and 18 per cent ticket fines given by the prosecuting authority (including police and customs). The remaining 8 per cent are other types of sanctions, mainly sentenced by the courts.

The statistics are now classified according to the new standard for offences, and the number of sanctions from the courts is this year affected by the new sanctions register.

Fewer on the spot fines given in traffic

There were 10 900 fewer on the spot fines in 2015 than the year before, and this is the lowest number since 2003. Because of the large share of on the spot fines, these contribute strongly to the total decrease by 3 per cent for all sanctions compared to 2014.

Most sanctions decided by the prosecuting authority

The statistics on penal sanctions are for the years 2002-2015 now classified according to the new standard for offences, presented in the textbox below. According to this classification traffic offences and drug and alcohol offences are the largest groups of principal offences, concerning respectively 30 and 28 per cent of the sanctions in 2015, on the spot fines kept aside. Further, 14 per cent of these sanctions were given for public order and integrity violations and 10 per cent for property theft.

The prosecuting authority imposed 57 400 sanctions beside on the spot fines. Of these 53 900 was ticket fines and 3 500 was prosecution conditionally dropped. In the period 2006-2015, there has been a considerable increase in the use of prosecution dropped on conditions, and in 2015 the number was about 5 per cent higher than in 2014. 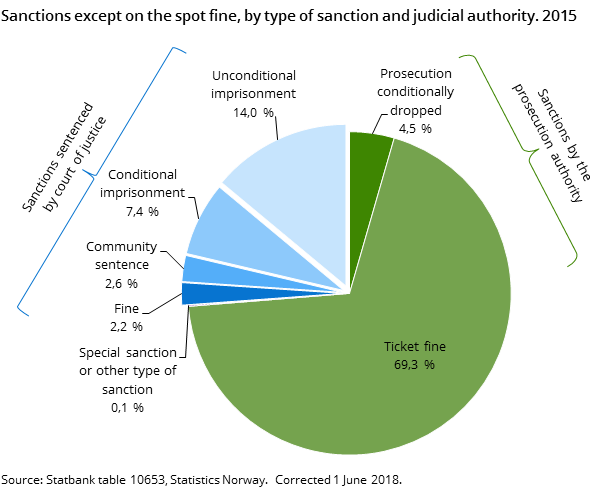 Imprisonment in eight out of ten court sentences

In 2015 almost 20 500 of the registered penal sanctions had been sentenced by a court, which is 4 per cent more than in the previous year. The courts had issued nearly 10 900 sentences on unconditional imprisonment and more than 5 700 on conditional imprisonment, somewhat more than the year before. However, the increase is probably caused by the transition to a new sanction register. According to Statistics Norway’s estimation there would instead have been a decrease in court sentences, as is accounted for in the textbox below.

More registrations in the new sanction register in 2015

Considerable more sanctions were registered during the last months of 2015 than earlier years as a consequence of the new sanction register from 1 October 2015. The estimated effect of this transfer indicates that about 2 800 more sanctions were registered in the new register during the last quarter of 2015, based on practice of registration in the period 2010-2015. The number is equivalent to about 1 per cent of all sanctions registered in 2015, and the effect is of relatively small importance for the statistics that include all types of sanctions.

The statistics with distribution of sanctions by groups of principal offence are also affected unevenly. Without the extra registrations, the number of sanctions within the group of Drug and alcohol offences would have been expected to be 5 per cent less (1 090 in number) in 2015, and the group of Property theft 4.5 per cent less (370 in number). This effect could also be of importance for the groups of Violence and maltreatment (3 per cent, 166 in numbers) and Other offences for profit (2 per cent, 460 in numbers), relative to the total scope and time perspective. However, it seems to have less or no influence of the groups of Criminal damage (2 per cent, 16 in numbers), Public order and integrity violations (1.5 per cent and 155 in numbers) and Traffic offences (0.3 per cent, 570 in numbers).

This effect is of approximately the same importance, in per cent and numbers, for the statistics of sanctioned persons distributed by groups of principal offence. An additional distribution by age gives the same effect, but is somewhat bigger for the age group 18-39 years over all, than older persons. Read more about the new sanction register in About the statistics.

The courts use of the different types of penal sanctions has been relatively stable the last three years, after a period of an increasing share of unconditional imprisonment – shown in Figure 3. Special sanctions are used against few offenders, and usually only in very serious cases. In 2015 there were registered 16 sentences to preventive detention, 19 to compulsory mental health, and none to compulsory care.

Figure 3. Sanctions sentenced by court of justice, by selected type of sanction

Unconditional imprisonment most often for drug and alcohol offences

Sexual offences are together with violence and maltreatment the two groups of principal offences that most often result in unconditional imprisonment when first given a penal sanction. This was the case for 46 per cent of the sexual offence sanctions and 40 per cent of the violence and maltreatment sanctions. However, the share varies considerably between types of sexual- and violence offence. For example, 22 of 24 sanctions for homicide registered in 2015 were unconditional imprisonment, the remaining 2 were compulsory mental health care.

The decrease in sanctions for traffic offences was the main cause of 8 500 fewer persons being registered with one or more penal sanctions in 2015 than the year before. A total of 259 700 sanctioned persons is the lowest number registered in this statistics, counting unique persons, going back to 2005.

In the statistics counting all types of sanctions it is the age group 40-49 years that has the highest rate of sanctioned per 1000 population. The share of traffic offences, such as speeding, is relatively higher for the older than the younger age groups, though.

Sharpest decrease for 18- to 20-year-olds

Penalisation of young people has changed much recent years. Of all registered sanctions against 15- to 17-year-olds almost 40 per cent was prosecution conditionally dropped, a share that has increased over several years. There were also registered 48 convictions on juvenile sanctions in 2015, the first whole year this type of punishment has been in use.

People under 30 made up more than half of all persons sanctioned in 2015 with drug and alcohol offence or public order and integrity violations as the principal offence. However, for some of the underlying types of offences the age distribution of the sanctioned persons differs. Of those sanctioned for offences against the Act relating to medicinal goods (i.e. use and minor possessions of narcotics) 53 per cent were between 15 and 24 years old. In comparison, less than 15 per cent of persons convicted for aggravated narcotic offences are in this age group.

As shown in Figure 5, there is a more even distribution of persons sanctioned for theft and violence, although younger people also have the highest rates for these groups of principal offences.