Most Norwegians have a close confidant and at least two persons they can rely on if they experience personal problems, but the elderly and single persons more often lack such close relationships. 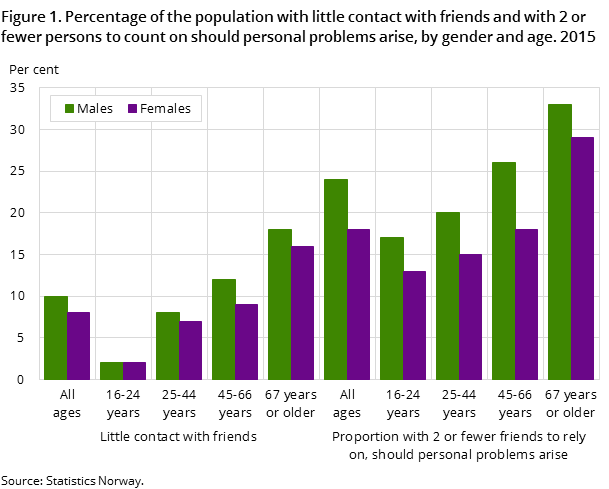 Most people have someone to confide in

Only 3 per cent report that they do not have someone who is close to them who they can confide in. The elderly more often than younger people lack a confidant, but the disparities between age groups are fairly small. While 2 per cent of individuals aged 16-24 years lack someone to confide in, the corresponding share is 4 per cent among individuals aged 67 years or older. The size of networks also varies by age. Fifteen per cent in the age group 16-24 years report having two or fewer persons to rely on in the event of personal problems, compared with 31 per cent among individuals older than 66 years. 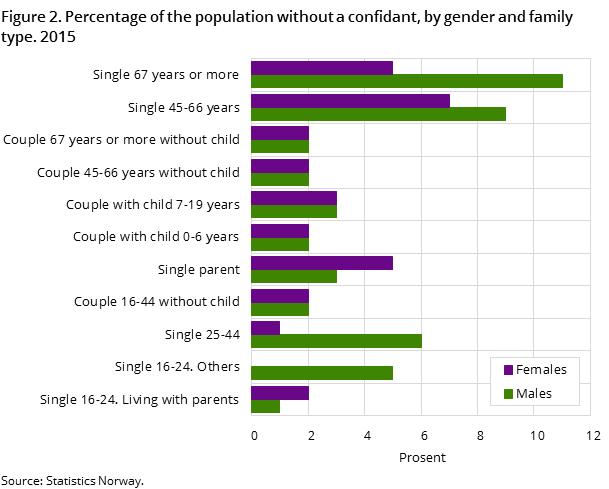 Single people more often than others lack someone to confide in, and particularly single people in the oldest age groups. Approximately one in ten men over the age of 44 do not have someone to confide in. Young single men also lack someone they can confide in more often than men who are married or cohabiting. At the same time, single men and women in the age group 25-44 have the same extent of contact with friends as persons who have a partner. 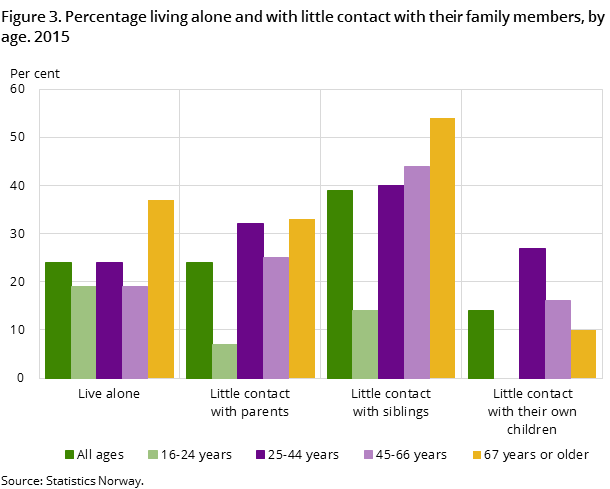 Individuals in the age group 16-24 see their friends more frequently than those in older age groups, and they also have more contact with friends by telephone or other media. Only 2 per cent in this age group report seeing their friends less than once a month. Generally, there are only small disparities in the extent of contact with friends among young persons in different regions and areas of residence. However, young persons who live in densely populated areas more often report having few people they can rely on if they encounter personal problems. Seventeen per cent of those aged 16-24 who live in urban areas report having two or less people they can rely on in such cases, compared to 12 per cent in sparsely populated areas.

Individuals in sparsely populated areas more often see their parents and siblings than individuals who live in urban areas. These figures include individuals who live with these family members. At the same time, individuals living in cities with 100 000 or more inhabitants have somewhat more contact with their parents by telephone, e-mail or other media compared with individuals living in sparsely populated areas. The amount of parental contact varies among regions. While the highest proportion with limited parental contact is found in Oslo and Akershus, the highest proportion with little contact with their children is found in Northern Norway. Agder and Rogaland is the region with the highest share that sees their friends and family often. This is also the region with the lowest proportion that lives alone.

More contact with neighbours in the north, least in Oslo and Akershus 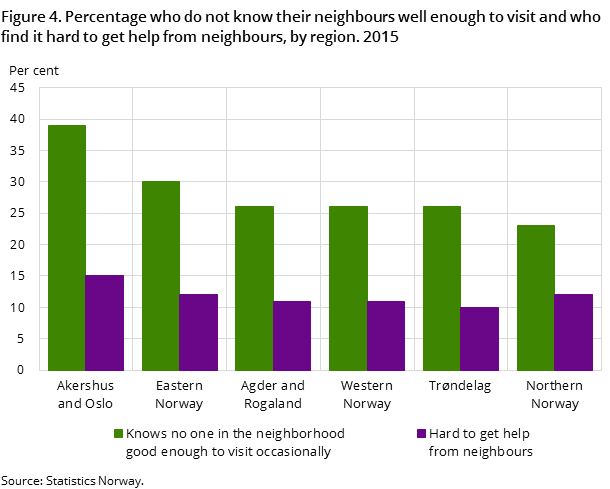 One in four live alone

Approximately one in four Norwegians live alone. The share that lives alone is highest among the elderly. Thirty-seven per cent of the over 66s live alone. A markedly higher proportion of elderly women than men live alone, but this gender disparity has declined in recent years. In 2015, 47 per cent of women older than 66 years lived alone, compared to 26 per cent of men in this age group. The proportion of elderly women living alone has declined by almost 10 percentage points since 1998, when the share was 55 per cent. The decline in the share of elderly women living alone is related to the increase in men’s life expectancy over the past years. Although elderly women more often than men live alone, they have a close confidant as often as elderly men.

…and among individuals who are not employed or studying

The extent of social contact also varies by self-reported economic status. Old age pensioners, the disabled and the unemployed have less contact with friends than students and the employed. The unemployed also have less contact with their families, but this is not the case among the disabled and pensioners. Individuals who are not in the labour market are still more vulnerable in terms of networks: they more often live alone, more often lack a confidant, and they have fewer persons they can count on in the event of personal problems. Moreover, these groups more often than the employed report that others show little interest in what they do. 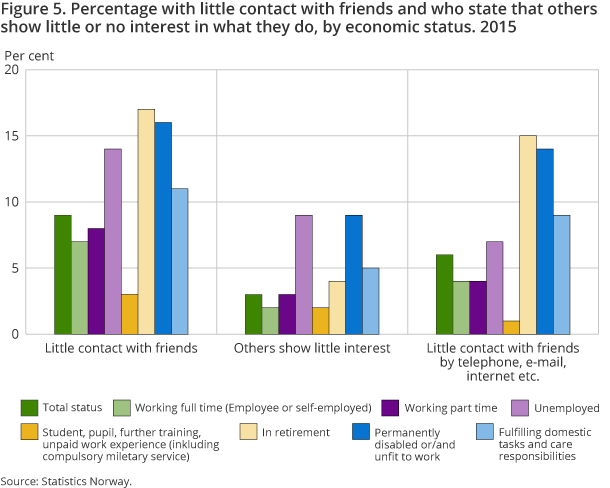