Adult men with a Norwegian citizenship are most frequently imprisoned in Norway, but more than half of those in custody were non-Norwegian citizens. Although this is relatively similar to recent years, far more people are serving their prison sentence under electronic monitoring (EM) outside of prison facilities. 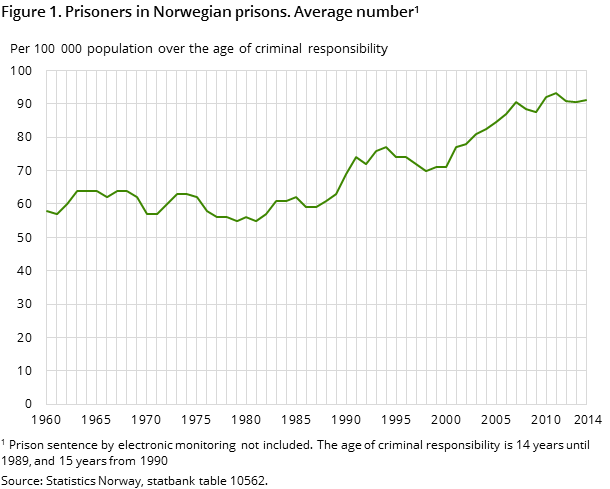 Imprisonment given for different types of offences

Four different groups of crime had almost the same number of imprisonments in 2014. Of the 11 458 new imprisonments, an offence of violence was the principal offence in somewhat more cases (2 319) than theft and other offences for profit (2 195), narcotic offences (2 128) and traffic offences (2 102).

Stable majority of men and inmates over 30 years

Among those who were imprisoned on 1 January 2014, 95 per cent were men. This is about the same share as in the previous twelve years. Of all imprisoned persons with known age, 67 per cent were over 30 years of age.

Of the inmates under 30 years of age at the beginning of the year, 59 per cent were serving a sentence for either other offences for profit or offences of violence as their principal offence. The corresponding share for those over 30 years of age was considerably smaller, with 43 per cent. Of the principal offence, this older age group is more frequently imprisoned for narcotic offences, economic offences and traffic offences than the younger groups.

Very few persons under 18 years of age are imprisoned, and when 15-17 year-olds are imprisoned they are almost always held in custody – as shown in figure 3. 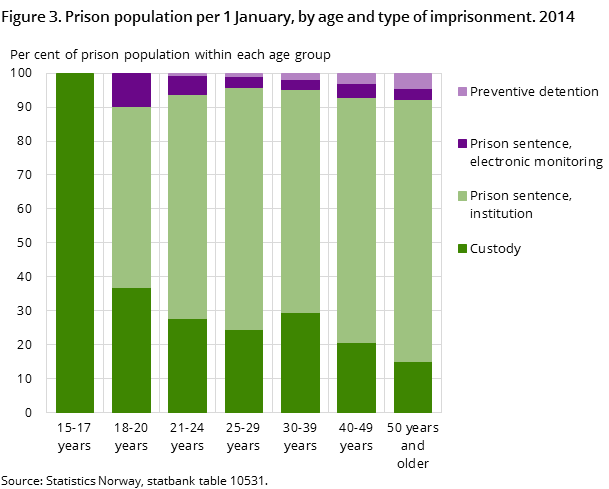 Seven out of ten are Norwegian citizens

Among the total 1 276 non-Norwegian citizens imprisoned at the beginning of the year, 60 per cent held a citizenship from another European country. Of this group of 771 persons, just over half held either a citizenship from Poland (167), Lithuania (126) or Romania (116). 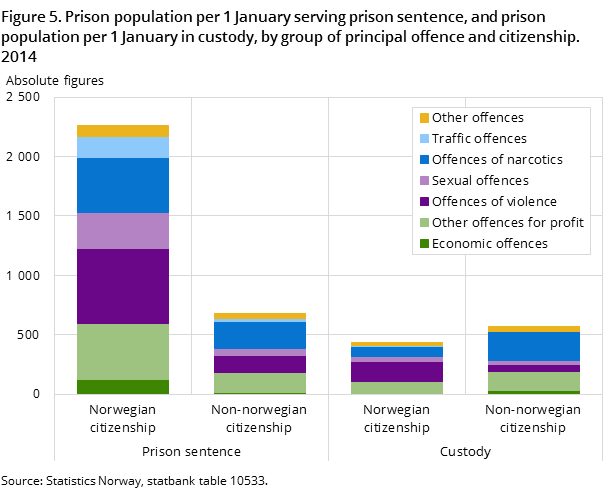 Custody most common for non-Norwegian citizens 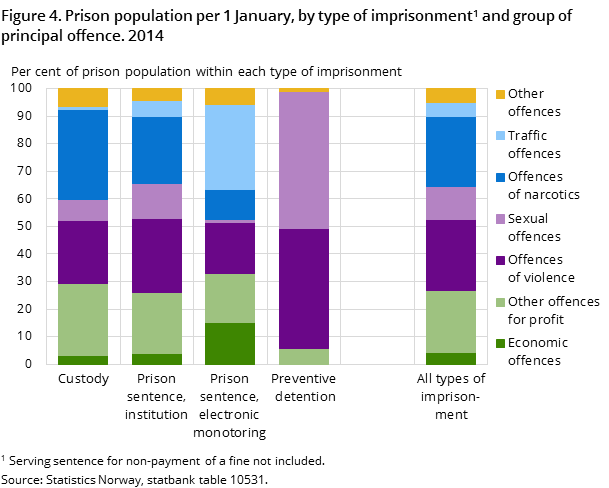 Some types of offences lead to shorter sentences

The offences of those imprisoned during a year somewhat differs from the offences of those who make up the prison population at any given time. This is partly due to shorter sentences and misdemeanours making up a bigger share of the new imprisonments. For example, traffic misdemeanours and narcotic offences each made up about 18 per cent of the new imprisonments, while only 5 per cent of the prison population at the beginning of the year had a traffic misdemeanour and as much as 25 per cent had a narcotic offence as their principal offence – as shown in figure 2. 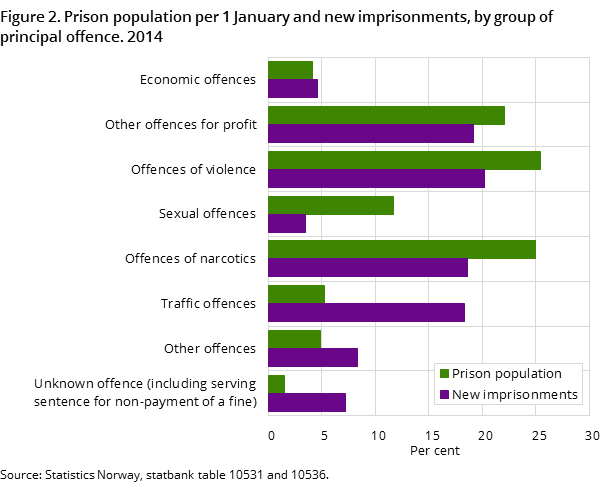 Of the total 3 715 discharges from custody and transfers from custody to serving a sentence, 1 267 persons had been held in custody for 90 days or more. This is nearly a 10 per cent increase from the year before. At the same time there was a big drop in the number of custody detentions of less than 90 days. Those held in custody for less than 30 days saw the biggest drop – as much as 20 per cent from the year before.

Among those held in custody, the number of prison days increased for those serving a prison sentence. In 2014, nearly 11 000 more days were served in a prison facility than the year before. This is in addition to the increase in prison days as a result of the extended use of electronic monitoring (EM).

The number of commenced and completed imprisonments is about level with the year before. This is the case for both shorter and lengthier imprisonments.

Many of the shortest sentences now served by electronic monitoring

Of all completed sentences with imprisonment in 2014, 30 per cent were partially or fully completed by electronic monitoring. As shown in figure 6, this is a significantly bigger share than previous years. 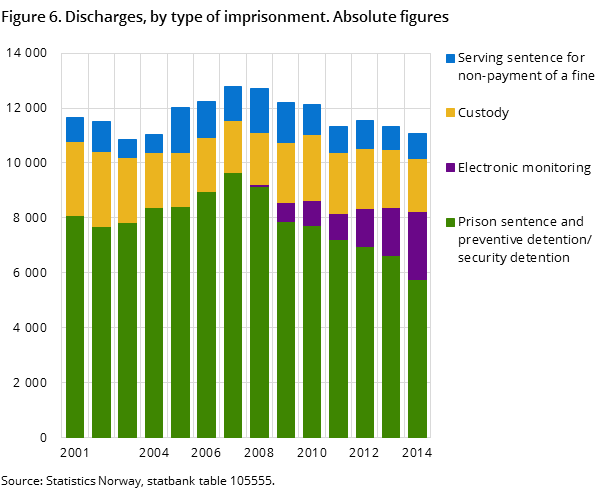 Of all the discharges with a prison time of less than one month, the share of electronic monitoring was as much as 44 per cent. Discharges from imprisonment for those who have served between 30-89 days totalled 30 per cent. The corresponding shares for these shorter sentences in 2011 were 18 and 10 per cent respectively, and less than 12 per cent of all completed imprisonments were carried out by electronic monitoring in 2011.

Electronic monitoring used for many types of offences

Among those discharged from electronic monitoring in 2014, 47 per cent had a traffic misdemeanour as their principal offence. Of those serving sentences for traffic offences, 80 per cent were convicted of driving under the influence. In total, there were 1 628 discharges from imprisonments for driving under the influence as the principal offence. Thus, a majority of these discharges (56 per cent) had completed their sentences with an ankle monitor outside of the prison facilities.

Serving at home with an ankle monitor is also a more frequently used alternative for prison sentences for several other types of offences. For example, of all completed electronic monitoring in 2014, 14 per cent had an offence of violence as their principal offence.

As in the previous two years, the extraction of raw data from the Norwegian Central Criminal Record and Police Information System (SSP) is carried out significantly later than in previous years. Thus, for the last three years, this represents more of a full count of actual occurrences. This is first and foremost the case for the figures on new imprisonments and transfers made directly from custody to serving a prison sentence, and particularly with regard to the most severe crimes with a long processing time in the criminal justice system. Thus, these units does not contain figures prior to 2012. Further reading is available in About the statistics, including in the chapter on Sources of error.

The statistics are expanded with more, and more detailed, tables on type of imprisonment, type of offence, age, sex etc. Some concepts and definitions have been adjusted, and some quality improvements have been made.

Because of the breaks in time series, no figures have been added for new imprisonments and transfers from custody to serving sentence. From 2002 and onwards, figures in StatBank are considered the official statistics on Imprisonments. See Archive for earlier years.