Results from a recently released price level survey conducted by Eurostat show that Norway had the third highest price levels in Europe in 2017. Iceland and Norway stood out with prices around double that of the rest of Europe for alcoholic beverages and tobacco. 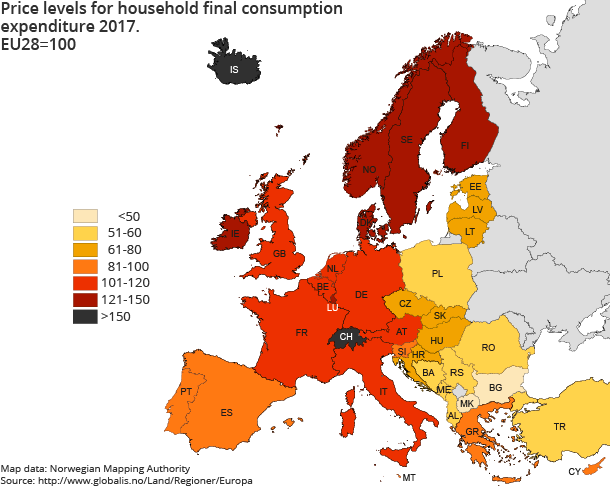 Food and alcoholic beverages most expensive in EFTA countries

Figure 1. Price levels in the Nordic countries according to ECOICOP division. Indices 2017. EU28=100

Cheap holiday in the Balkans

Price levels in the Nordic countries

How is the price level calculated?

Price levels per country are expressed as indices relative to an average of the 28 EU member states (EU28 = 100). Prices include VAT, any subsidies, and non-refundable fees. Short-term offers and special discounts that are not available to all consumers are not included in the survey. The prices are collected in the capital in each country and adjusted later to the national average and annual average.

Difficult to compare excise taxes on alcohol and prices