EFTA countries the most expensive in Europe

The European statistics office (Eurostat) recently released calculations based on a price level survey conducted in all European countries. Results show that Norway had one of the highest price levels in Europe in 2016, particularly for alcoholic beverages and tobacco. 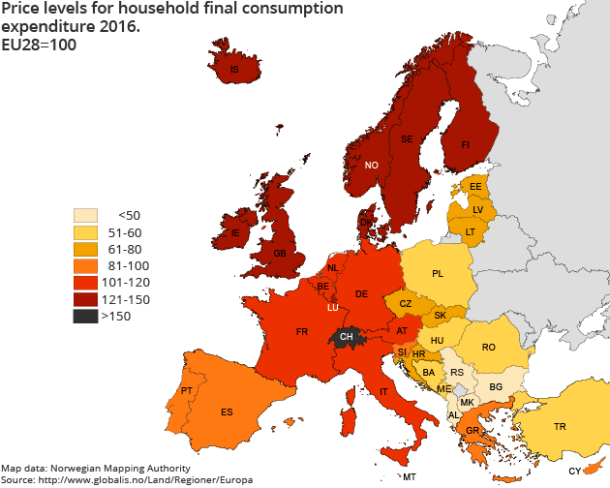 Food, beverages and tobacco most expensive in Northern Europe

Price of services highest in EFTA

The Eurostat survey also compared prices differences of different service groups across countries. Switzerland together with Iceland and Norway followed by the rest of the Nordic countries topped the list of countries with the highest prices in restaurants and hotel services. A number of Balkan countries, namely Albania, Macedonia and Bulgaria, had the lowest price levels in restaurants and hotel services in Europe. For services connected to recreation and culture, prices were as much as 40 to 60 per cent higher in the Nordic counties than the European average. Norway’s price levels were 52 per cent above the EU28 average. The same pattern was observed for prices of transportation services, where most countries in the Balkans had around 30 per cent lower prices compared to the European average. The differences in the price levels of services can be attributed to the differences in salary levels across Europe.

Clothing and footwear cheapest in Turkey

Turkey came out as the cheapest for clothing. Local prices may be affected by Turkey’s traditionally strong textile and clothing industry, where prices were 38 per cent lower than the rest of Europe. The survey shows that there is not much difference in the prices of clothing and footwear throughout Europe. The Nordic countries were exceptions, with price levels that were between 23 and 65 per cent higher than the rest of Europe. Norway is a big importer of clothing and footwear, and the price level for Norway was around 30 per cent above the EU28 average in 2106.

How is the price level calculated?

Price levels per country are expressed as indices relative to an average of the 28 EU member states (EU28 = 100). Prices include VAT, any subsidies, and non-refundable fees. Short-term offers and special discounts that are not available to all consumers are not included in the survey. The prices are collected in the capital in each country and adjusted later to the national average and annual average.

Difficult to compare excise taxes on alcohol and prices