General government revenue grew by about 9 per cent in 2018.

According to preliminary figures from general government revenue and expenditure, total revenue was NOK 1 948 billion in 2018, which is a NOK 162 billion increase from the previous year. Taxes, excise, dividends and operational surplus from the petroleum sector are estimated at NOK 260 billion. This constitutes a NOK 73 billion increase from 2017. From Mainland Norway, taxes and fees, including social security contributions to the National Insurance Scheme, totalled NOK 1 251. This constitutes an increase of 4.6 per cent from 2017.

Property income, excluding dividends from the petroleum sector, is among the revenue items with the strongest growth in the last few years. This item grew by nearly 10 per cent in 2018, and recorded a total receipt of NOK 324 billion by the end of the year. In addition to transfers from Norges Bank, the item comprises interest and dividends from investments by the Government Pension Fund Global and from publicly traded companies with partial government ownership. 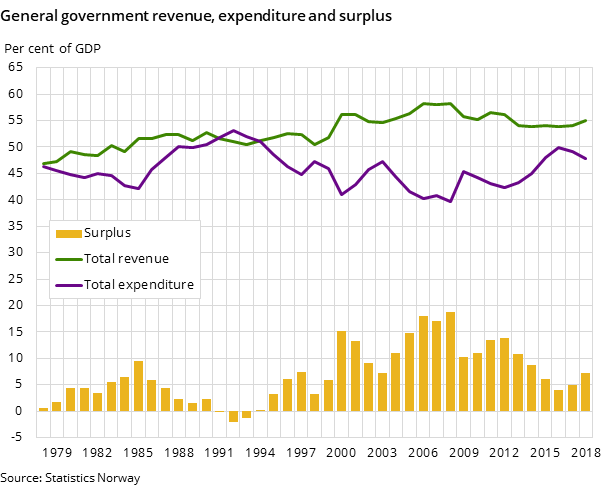 General government expenditure is estimated at NOK 1 693 billion in 2018, which is an increase of 4.3 per cent from 2017. Investments in fixed assets, such as road and rail projects, make up the expenditure item with the strongest growth in the last few years. Total investments grew by NOK 17 billion in 2018 and amounted to NOK 190 billion at the end of the year.

Surplus at 5 per cent of GDP

In the period 2000-2012, general government surplus averaged more than 13 per cent of GDP, which is a notably high share by both historical and international standards. This has allowed the Norwegian government to amass a considerable amount of financial capital, mainly through the Government Pension Fund Global. Weaker revenue flows, in particular from the petroleum sector, combined with expenditure growth, resulted in a sharp decline in general government surplus in the subsequent period between 2013 and 2016. With the help of increased activity in the petroleum sector, the surplus has again risen, and it is estimated at NOK 255 billion in 2018. This constitutes a NOK 91 billion increase from 2017, and amounts to 7.2 per cent of GDP in 2018.

Preliminary figures for local government show a NOK 23 billion deficit in 2018. This amounts to a deficit increase of about NOK 10 billion compared to the previous two years. The continual deficit can be attributed to a high and increasing level in investments. Investments have been highest in areas such as road projects, compulsory schooling, health care, public housing, and water and sewerage. As a result of the perpetual deficit, the debt level in local government has risen sharply in recent decades. 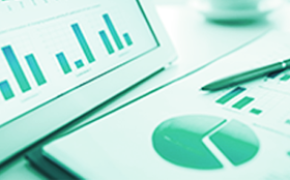