Increase in both revenue and expenditure

The central government’s fiscal account for 2017 Q1 shows an increase in total revenue of NOK 8 billion and an increase in expenditure of NOK 34 billion.

The central government’s total revenue in the first quarter of 2017 amounted to NOK 316 billion, which equals an increase of 2.5 per cent compared to the first quarter last year. Total expenditure rose by 11 per cent, and totalled NOK 342 billion. This gives a deficit of NOK 26 billion before net transfers from the Government Pension Fund Global.

The rise in the central government’s revenue was curbed by a decline of NOK 15 billion in taxes and fees. This decline relates to the reorganisation of the value added tax on imports and altered deadlines for this VAT. At the same time, operating surplus from extraction of petroleum increased by NOK 4.5 billion. Contributions to the National Insurance Scheme also increased by NOK 3 billion. 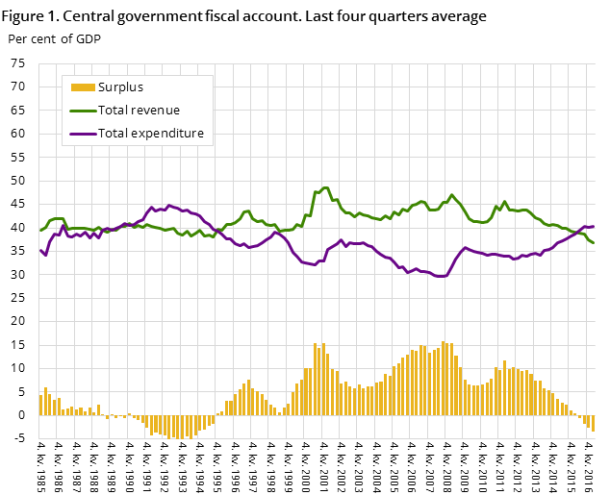 The increase in total expenditure largely stems from increased transfers. The increased transfers accounted for NOK 33 billion out of the central government’s increase in total expenditure of NOK 34 billion. Pensions and benefits have risen by NOK 5.5 billion. Major items that contribute to the increase in other transfers are those to the public health enterprises and the newly established state-owned railway infrastructure company Bane NOR. In the first quarter of 2017, the health enterprises received a larger share of the total allocation than was the case one year ago. The Norwegian railway network is no longer funded through central government operation, but rather through transfers to Bane NOR. Although a state-owned company, Bane NOR remains outside the government’s fiscal account.

The quarterly figures are subject to random fluctuations, and must be interpreted with caution.