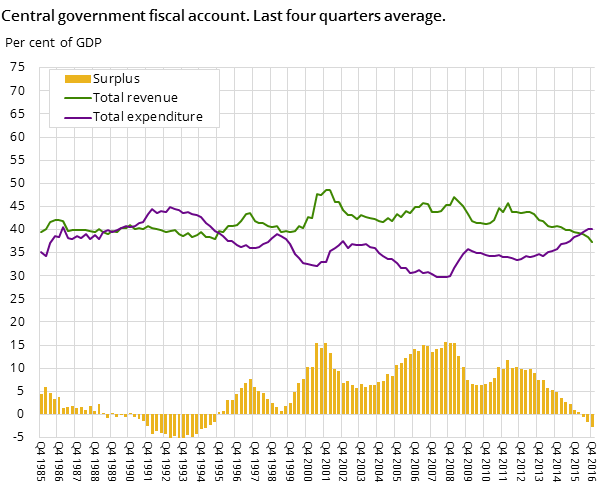 In the fourth quarter of 2016, the central government’s total revenue amounted to NOK 254 billion, which equals a reduction of nearly 10 per cent compared to the same period in 2015. Similarly, total expenditure rose by slightly less than 1 per cent, and amounted to NOK 314 billion. The fiscal account thus shows a deficit of NOK 60 billion before net transfers from the Government Pension Fund Global.

Government sales of goods and services have increased by NOK 2 billion. Revenue from taxes and fees has declined by NOK 12.5 billion compared to 2015 Q4. Operating surplus from petroleum extraction has declined by a third. Interest and dividends have been reduced by NOK 2.4 billion.

The central government’s operating costs have increased by NOK 6.2 billion compared to 2015 Q4, and amount to NOK 61 billion. Purchases of goods and services, which make up nearly a third of these operating costs, have risen by 18 per cent.

The quarterly figures are subject to random fluctuations, and must be interpreted with caution.