Emissions to air of hazardous substances and particulate matter, 1990-2015

There were comparatively small changes in emissions of hazardous substances from 2014 to 2015. Some large increases are due to casual annual variations, while there was a substantial 10 per cent drop for mercury. 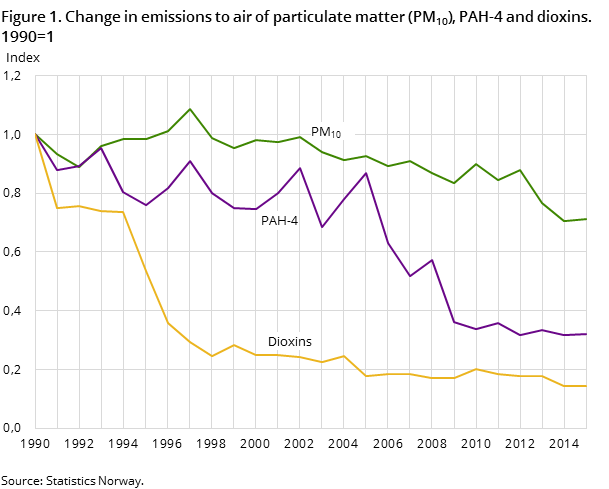 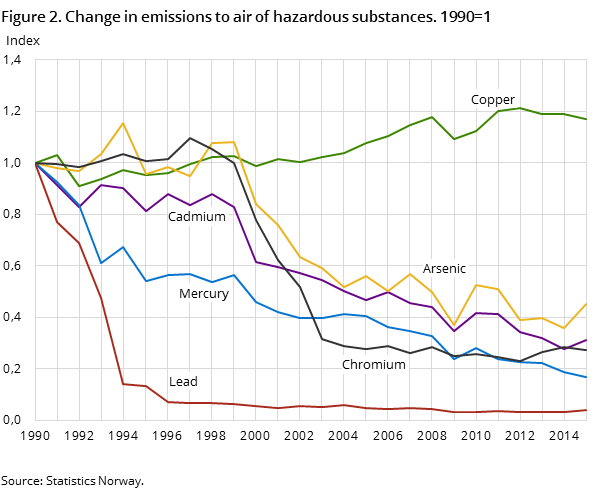 These statistics comprise only emissions to air.

Decrease in most emissions since 1990

Emissions of hazardous substances have been reduced considerably since 1990, except for copper, which has increased in the same period. The cause of the decrease since 1990 is primarily reduced emissions within manufacturing and mining. Cleaning measures, changes in production procedures and lower activity in some industries have all resulted in reduced emissions. Many hazardous substances are sensitive to, among other things, measuring uncertainty. This implies that variations between single years not should be emphasized too much, while the trend over a longer period says more about the emission development. For several heavy metals it is a national target to end the emissions by 2020. Internationally, Norway has an obligation to reduce emissions of selected hazardous substances compared with 1990.

The emissions of mercury amounted to 0.2 tonnes in 2015, which is 10 per cent less than the previous year. Mercury emissions were 83 per cent lower in 2015 than in 1990, particularly due to a 93 per cent reduction in the metal-working industry, which was by far the most important source in 1990. Regulation of mercury in products has also led to a major reduction in emissions from this source. Today, there is no dominant source for emissions to air of mercury, but the metal-working industry, navigation and fishing are the largest contributors.

Estimated emissions to air of lead in 2015 amounted to 7.2 tonnes, which is 23 per cent more than in 2014. From 1990, the lead emissions have been reduced by 96 per cent, mainly due to the phasing out of leaded petrol in the early 1990s. The increase from 2014 to 2015 is due to a doubling in the sales of aviation petrol. Even though these sales are minor compared to the total sales of petroleum products in Norway, the emissions of lead from these energy goods are so large and the total lead emissions in Norway today so small, that such an increase has a strong effect on the figures.

Through various international agreements, Norway has committed to reducing its emissions to air of certain hazardous substances from the 1990 level. Different protocols under the Convention on Long-Range Transboundary Air Pollution (CLRTAP) set out the targets for emissions with regional effects. One of these protocols, the Aarhus Protocol, stipulates the commitments for the reduction of PAHs, dioxins, lead, cadmium and mercury. There are no commitments for copper, chromium or arsenic, but there are requirements for reporting emissions.

The estimation of PAH emissions has been revised according to the Norwegian reporting obligations. Emissions from four different PAHs are now estimated. The sum of these is presented here as PAH-4.

For mercury from cremations, a new estimation method gives lower emissions. The relative change in total emissions varies between 3 and 24 per cent, and is largest for the later years, concurrently with the emission decrease in the period from 1990.