Emissions to air of hazardous substances and particulate matter, 1990-2012

The emissions to air of most hazardous substances decreased in 2012. The decrease was mainly due to closures and temporary shutdowns in the manufacture of pulp and paper. 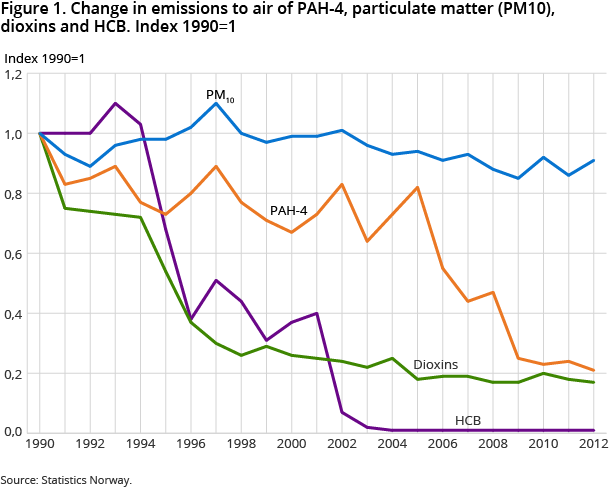 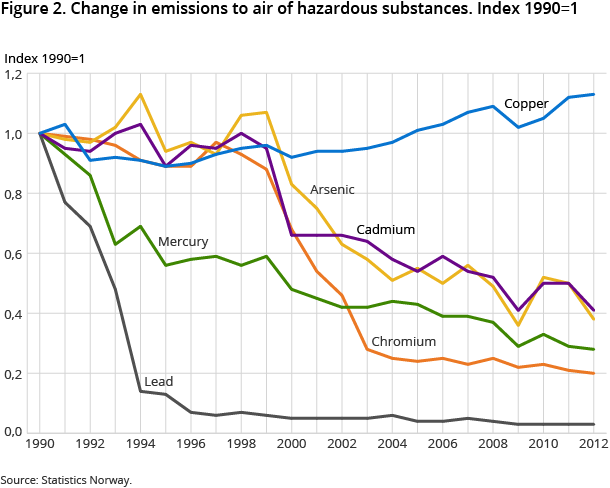 The emissions of most heavy metals, arsenic , dioxins and PAHs (polycyclic aromatic hydrocarbons) to air decreased in 2012. The decrease was due to reduced activity in some areas of manufacturing and a fluctuating content of contaminants in raw materials and reducing agents used in metal production.

Reduction in most emissions after 1990

The emissions to air of several hazardous substances including PAHs (polycyclic aromatic hydrocarbons) have been considerably reduced since 1990. The cause of the decrease since 1990 is primarily reduced emissions within manufacturing and mining. Cleaning measures, changes in production procedures and lower activity in some industries have all resulted in reduced emissions.

Emissions of particulate matter increased by 6 per cent

In 2012, 22 grams of dioxins were emitted to air. Since 2011, emissions of dioxins have decreased by 4 per cent. The emissions have been reduced by more than 80 per cent since 1990. A large proportion of this reduction is due to the shutting down of one industrial plant and one mine. In addition, emissions from energy supply were reduced by 94 per cent from 1990 to 2012 due to the introduction of cleaning measures at waste incineration plants. Since 2005, the emissions have been relatively stable. The most important emission source in 2012 was wood-burning in private households, which contributed with 36 per cent of the total dioxins emissions. Combustion emissions from navigation and process emissions from metal production accounted for 19 and 7 per cent of the total respectively.

Statistics Norway has developed a national HCB – hexachlorobenzene emission inventory for the period 1990-2012. Estimated total emissions in Norway of HCB in 2012 were 1 300 grams. The most important source for emissions of HCB in 2012 was road transport, which was responsible for 52 per cent of total emissions. Emission of HCB has decreased by more than 99 per cent in the period 1990-2012 mainly due to the closure of magnesium production.

The reduction in emissions can be explained by closures and temporary shutdowns of several large companies in power intensive industries during 2012. The biggest reduction can be seen in the manufacture of pulp and paper and the manufacture of metal and basic chemicals.

Emissions of mercury were 0.4 tonnes in 2012, which is a 4 per cent decrease from 2011. The main reasons for the decrease are reduced emissions from the manufacture of pulp and paper and production of ferroalloys. The most important sources of mercury emissions are manufacturing and mining and combustion without energy utility, which comprises cremations. The emissions have been considerably reduced since 1990, and have been relatively stable since 2000.

In 2012, 5.6 tonnes of lead were emitted to air. This is a reduction of 10 per cent since 2011. Emission from brake wear is the dominant source for emissions to air of lead.

Emissions to air of cadmium totalled 0.5 tonnes in 2012. Wood-burning in private households and combustion in the wood processing industry, mainly burning of refuse wood and waste liquor are the most important sources of emissions of cadmium to air. In 2012, these sources contributed with 29 and 18 per cent respectively. Cadmium emissions from wood processing industry have been reduced by 36 per cent since 2011. Cadmium emissions have been reduced by almost 60 per cent since 1990.The main reason for this is reduced emissions from production of iron, steel and ferroalloys due to emission reduction efforts and the closing down of production plants.

In 2012, 1.3 tonnes of arsenic were emitted to air, which is a 24 per cent decrease since 2011. For the past few years, the variation in arsenic emissions has been due to varying arsenic content in raw materials and reducing agents used in metal production. The total arsenic emissions have been reduced by 62 per cent since 1990.

Emissions of copper are stable

Emissions of copper were 29 tonnes in 2012. Copper emissions have increased by 13 per cent since 1990. Emissions from brake wear are the dominant source for emissions to air of copper.

The figures calculated in these statistics are emissions to air, i.e. the amount of particulate matter coming from chimneys, exhaust pipes etc. This is not to be confused with local air quality or concentrations, which is the amount of substance that is actually inhaled by humans. In concentration calculations, the fact that humans are more exposed to some emission sources than others is taken into account. For instance, emissions from wood-burning are often emitted from chimneys, and do not affect local air quality to the same extent as exhaust emissions. For this reason, one tonne of particulate matter from wood-burning is less significant to concentrations at ground level than one tonne from exhaust.

Recalculations in dioxins Open and readClose

The time series for dioxins from ferrosilicon and silicon production have been recalculated for the period 1990 to 2011. The new calculation results in lower emissions for all years than in earlier calculations.