Emissions to air of hazardous substances and particulate matter, 1990-2011

The emissions to air of several hazardous substances decreased in 2011. The decrease was partly due to lower emissions from wood combustion, manufacturing and energy production. 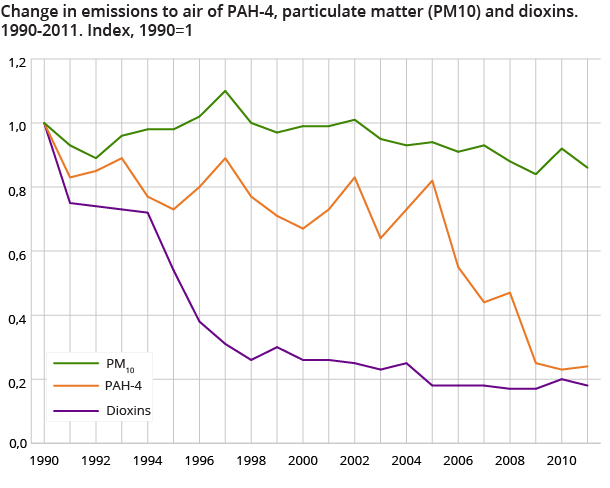 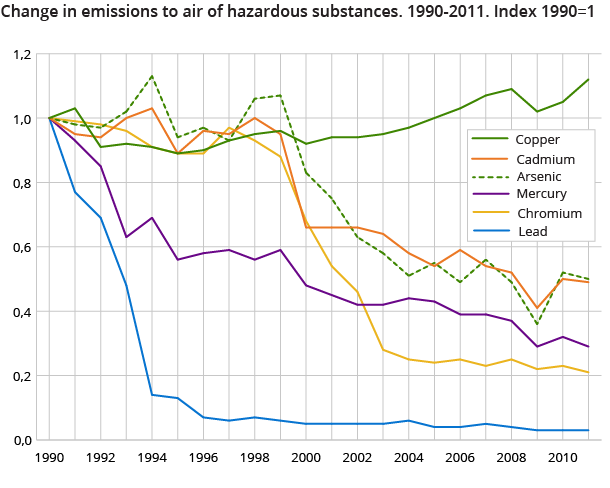 The emissions of some heavy metals, arsenic, particulate matter and dioxins to air decreased in 2011. The decrease was due to reduced activity in some areas of manufacturing, and a fluctuating content of contaminants in raw materials and reducing agents used in metal production.

Reduction in most emissions after 1990

The emissions to air of several hazardous substances  including PAHs (polycyclic aromatic hydrocarbons) have been considerably reduced since 1990. The cause of the decrease since 1990 is primarily reduced emissions within manufacturing and mining. Cleaning measures, changes in production procedures and lower activity in some industries have all resulted in reduced emissions.

Emissions of particulate matter decreased by 6 per cent

In 2011, 22 grams of dioxins were emitted to air. Since 2010, emissions of dioxin have decreased by 11 per cent. The emissions have been reduced by more than 80 per cent since1990. Alarge proportion of this reduction is due to the shutting down of one industrial plant and one mine. In addition, emissions from energy supply were reduced by 95 per cent from 1990 to 2011 due to the introduction of cleaning measures at waste incineration plants. Since 2005, the emissions have been relatively stable. The most important emission source in 2011 was wood-burning in private households, which contributed with 34 per cent of the total dioxin emissions. Combustion emissions from navigation and process emissions from metal production accounted for 19 and 12 per cent of the total respectively.

Emissions of PAH-4 emissions are stable

Emissions of mercury were 0.4 tonnes in 2011, which is an 11 per cent decrease since 2010. The main reason for the decrease is reduced emissions from production of cement and ferroalloys. The most important source of mercury emissions is combustion without energy utility, which comprises cremations. The emissions have been considerably reduced since 1990, and have been relatively stable since 2000

Emissions to air of cadmium totalled 0.6 tonnes in 2011. Wood-burning in private households and burning of refuse wood and waste liquor in the wood processing industry are the most important sources of emissions of cadmium to air. In 2011, these sources contributed with 23 cent of the total emissions each. Cadmium emissions have been reduced by 51 per cent since 1990, and the main reason for this is reduced emissions from production of iron, steel and ferroalloys due to emission reduction efforts and the closing down of production plants. This source was responsible for 10 per cent of cadmium emissions in 2011, compared with 26 per cent in 1990.

In 2011, 1.7 tonnes of arsenic were emitted to air. For the past few years, the variation in arsenic emissions has been due to varying arsenic content in raw materials and reducing agents used in metal production. The total arsenic emissions have been reduced by 50 per cent since 1990.

Emissions of copper were 29 tonnes in 2011, which is a 7 per cent increase since 2010. Copper emissions have increased by 12 per cent since 1990. Emissions from brake wear are the dominant source for emissions to air of copper.

The time series for mercury from mobile combustion and particulate matter for wood burning in the residential sector have been recalculated for the period 1990 to 2010. The new calculation results in lower emissions for all years than in earlier calculations.

The figures calculated in these statistics are emissions to air, i.e. the amount of particulate matter coming from the chimney, exhaust pipe etc. This is not to be confused with local air quality or concentrations, which is the amount of substance that is actually breathed by humans. In concentration calculations, the fact that humans are more exposed to some emission sources than others is taken into account. For instance, emissions from wood-burning are often emitted from chimneys, and do not affect local air quality to the same extent as exhaust emissions. For this reason, one tonne of particulate matter from wood-burning is less significant to concentrations at ground level than one tonne from exhaust.

All emission estimates are burdened with some uncertainty. Due to measuring uncertainty in data reported to the Climate and Pollution Agency, the uncertainty is particularly high for reported emissions from some areas of manufacturing. This is partly due to low levels of hazardous substances, which makes accurate measurements challenging. In addition, frequent measurements are essential to obtain good estimates when emissions vary with time, and the measurements should often be performed more frequently than what is practically and economically feasible.

Read more about emissions of acidifying substances. Revised emission figures for greenhouse gases will be published on 6 February 2013.

Report No. 14 (2006-2007) to the Storting presents new national targets for reductions in emissions of hazardous substances by 2010 from the 1995 level. The report lists 25 substances/groups of substances whose emissions shall be eliminated or substantially reduced (50-90 per cent reduction). These reductions comprise emissions to air, water and earth, but the targets are not specified for each category.

According to the national target, emissions and use of all chemicals posing a serious threat to human health and the environment shall be continuously reduced by 2020, and ultimately eliminated. The figures presented in this article only include emissions to air.

Through various international agreements, Norwayhas committed to reducing its emissions to air of certain hazardous substances from the 1990 level. Different protocols under the Convention on Long-Range Transboundary Air Pollution (CLRTAP) set out the targets for emissions with regional effects. One of these protocols, the Aarhus Protocol, stipulates the commitments for the reduction of PAHs and dioxins, lead, cadmium and mercury. For copper, chromium and arsenic, there are no commitments, but there are requirements for reporting emissions.

Emissions of particulate matter from wood-burning Open and readClose

Read more in the article Kraftig nedgang i vedforbruket  (in Norwegian only).