Incineration of waste has more than doubled over the last 10 years. In 2011, around 1.3 million tonnes of waste were incinerated – an increase of 14 per cent compared to 2010. 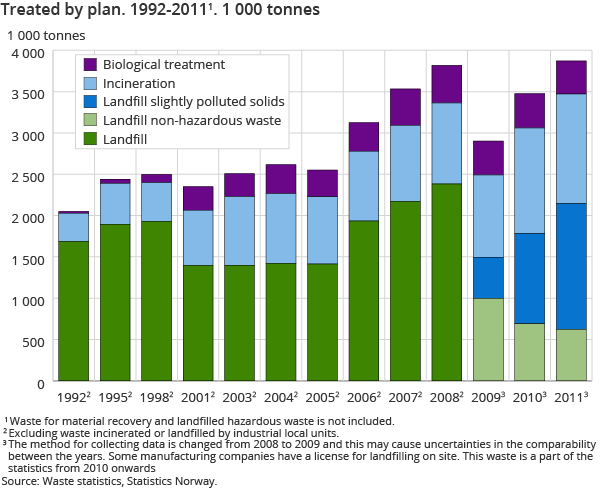 The amount of waste composed or used for biogas production has stabilised at around 0.4 million tonnes.

A large share of the waste entering landfills consists of slightly polluted solids – around three-quarters of the landfilled amounts. Slightly polluted solids are mainly made up of soil, rocks and gravel originating from construction activities. Due to the pollution potential, these solids require separate treatment, but are still not classified as hazardous waste.

The amount of non-hazardous waste being landfilled was about 0.7 million tonnes in 2011.

Methane emissions from landfills constitute around 2 per cent of total climate emission in Norway, or around 1 million tonnes of CO2-equivaltents – a decrease of 0.8 million tonnes compared to 1990.

The introduction of the landfill ban in 2009 brought about a decrease of landfill waste, which in turn requires large amounts of landscaping landfills. Simultaneously, the increase in landfilling of slightly polluted solids requires less landscaping landfills. In addition, stricter requirements have been imposed on the types of solids that are allowed to be used as cover material, which apparently has led to a shift from using waste as landscaping landfills to replacing it with cleaner fractions like soils and pebbles.

On 1 July 2009, the authorities imposed a ban on landfilling biologically degradable waste, such as paper, tree waste and food waste. A considerable number of dispensations were granted in 2009, and parts of 2010, which means that some municipalities still have dispensation and are allowed to landfill household waste until 2012.

The data collection has changed Open and readClose

The data collection has changed for the years of 2009 and 2010. Before then, data were reported with one form per waste plant as part of a statistical survey. However, as from 2009, the statistics are based largely on data reported to the County Administrator or Climate and Pollution Agency. This change may have led to some increased uncertainty of the basic data, and a break in the time series between 2008 and 2009.