The total amount of waste in Norway increased by 7 per cent from 2013 to 2014. In 2014, a total of 11.9 million tonnes of waste was generated. This continues the trend seen in recent years, with an increase by several per cent each year.

The amount of waste that Norway generates has been steadily increasing over the last few years, and this tendency continued in 2014. The increase from 2013 to 2014 was 7 per cent. At the same time, the value added measured by GDP (constant prices) has increased by two per cent from 2013 to 2014. 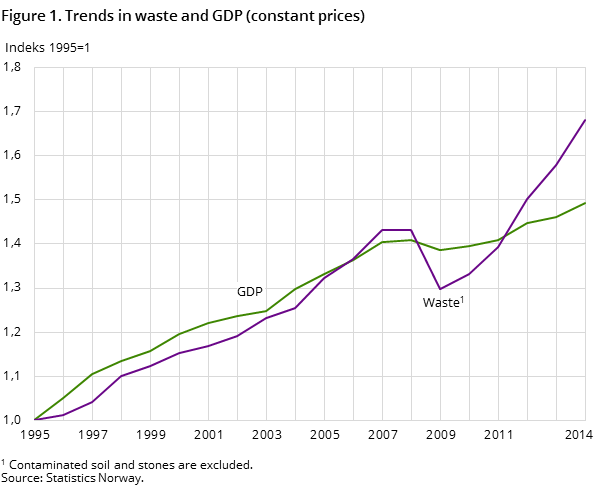 The waste amounts undergoing material recovery and incineration are similar. A total of 4.2 million tonnes of waste was recovered for material in 2014, and 4.2 million tonnes was incinerated. While asphalt, followed by metals and paper and cardboard constitute the largest fractions for material recovery, mixed waste followed by wood waste still constitute the largest fractions for incineration. 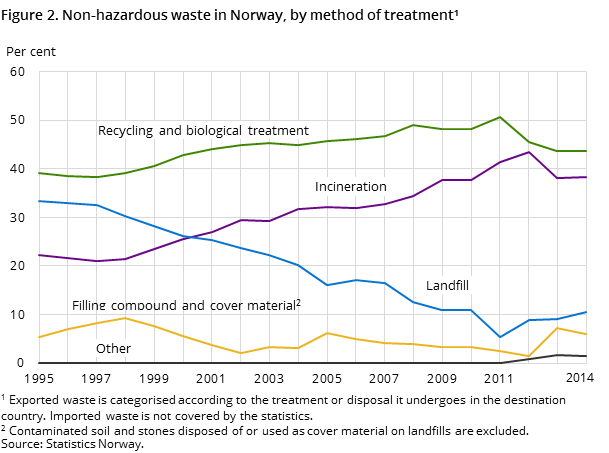 The major waste material categories in 2014 were mixed waste, which made up 23 per cent of the total, followed by hazardous waste with 12 per cent and wood waste with 11 per cent. These were the same three categories of waste that topped the list in 2012 and 2013. 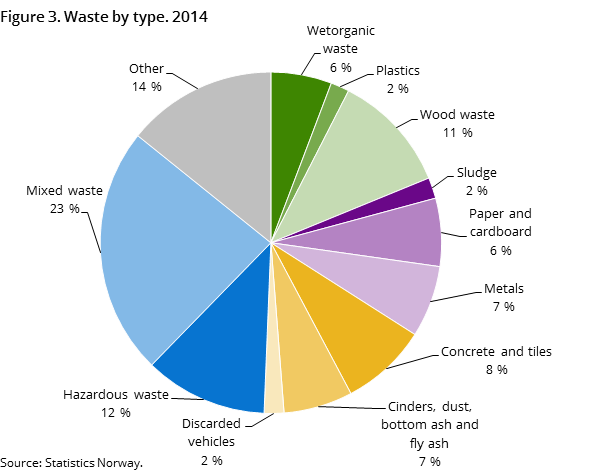 Most waste from the manufacturing industry

The manufacturing industry was the source of the largest amount of waste, with 2.6 million tonnes or 22 per cent of the total in 2014, followed by construction and demolition industry (21 per cent) and households (20 per cent). The waste amounts from the manufacturing industry and households were similar to the corresponding amounts in 2012 and 2013. However, waste from building and construction had a sharp increase from 2012 to 2014. This was partly due to a real increase and partly because a new source of data on asphalt from construction was added before calculating the 2013 figures. 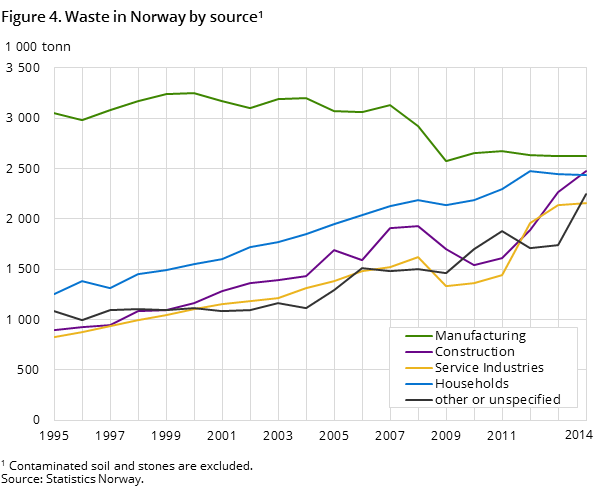 Masses for landfilling and cover materials

Prior to publication of figures for 2012, the waste account was subject to major changes in both methodology and published categories. Mixed waste is one of the categories. This means that large amounts of wet organic waste, paper and plastics, which were previously published in their own category, are now also part of mixed waste.

The waste account for Norway is still under development. Compared to 2012, more asphalt from construction is added. This contributes more than 400 000 tonnes.

Waste from the industry wholesale of waste and scrap is also included for the 2013 publication. This industry is included in the service industry.

For the 2013 publication, concrete and tiles reused at construction sites are placed in the treatment category filling compound and cover material. These amounts were previously placed under sent to material recovery.