Clean tap water for all

In 2017, around 98 per cent of inhabitants connected to municipal waterworks were supplied with drinking water that was hygienically safe in terms of thermo-tolerant intestinal bacteria (E. coli) content. Around one-third of the water generated by municipal waterworks is estimated to be ‘lost’ through leakage on its ways to consumers. 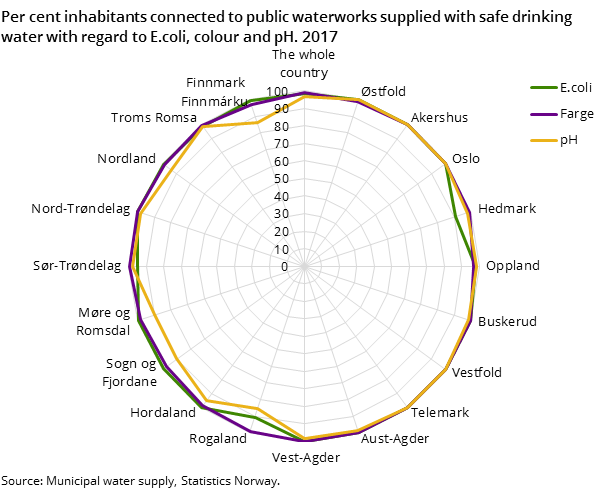 In 2017, around one in every three litres, or around 30 per cent, of the 680 million cubic metres of drinking water supplied by the municipal waterworks was estimated to be lost through leakage.

The leakage corresponds to 4.3 cubic metres of water per metre of pipeline system. According to KOSTRA figures (system for municipality-state-reporting), the loss through leakage has been relatively stable throughout the last ten years.

In comparison, around 43 per cent of water supplied by municipal waterworks to the pipeline system is consumed by households. An additional 2 per cent is consumed in holiday cottages or holiday homes. This gives a specific water consumption in the households of around 180 litres a day per person. 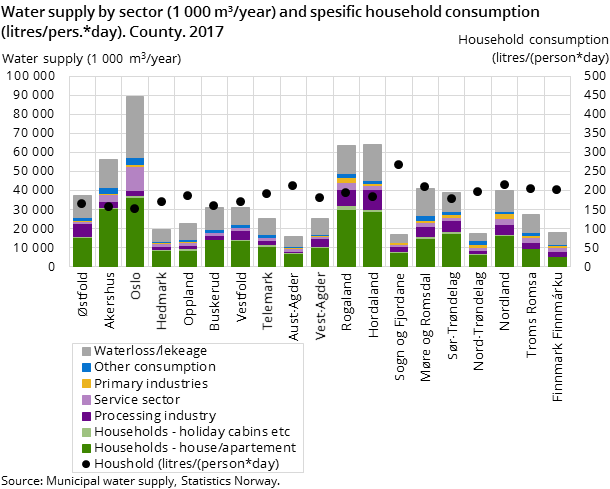 It has been estimated that around 34 per cent of the connecting households have water metres installed in 2018.

Around 4.5 million inhabitants in Norway were connected to the 1 100 municipal waterworks located around the country in 2017 (not including those serving only schools and kindergartens). This corresponds to a share of 85 per cent of Norway’s population. Dispersed across the water distributing system, this implies an average of 93 inhabitants per kilometre of pipeline. When also including private waterworks, the total is around 4.7 million inhabitants and 1 970 waterworks.

0.7 per cent of pipelines renewed

The renewal rate of municipal water pipelines varies from one year to another. Calculated as a 3-year moving average for the period 2015-2017, the rate of renewal is 0.66 per cent of the total pipeline system. This is around the same level as the previous 3-year average (2014-16). 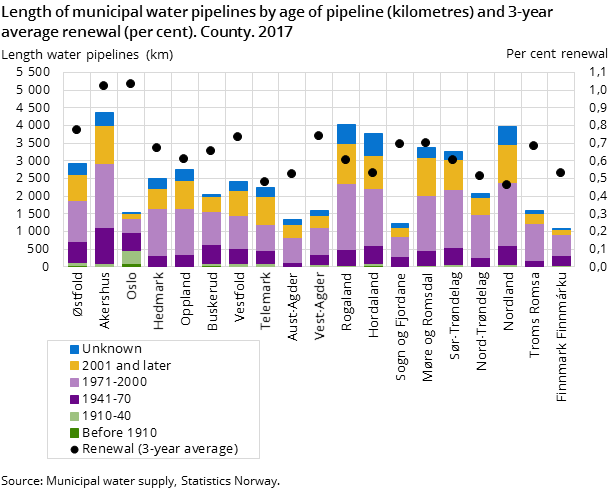 The current renewal rate means that it will take almost 150 years to renew the whole pipeline system, assuming that no new pipelines are installed in the coming years.

The length of the municipal water pipelines is estimated to be nearly 48 100 kilometres – around 1.2 times the earth’s circumference at the equator.

Around three quarters of an hour delivery failure

The estimated average annual technical delivery failure in the municipal water supply in 2017 was around 43 minutes per person. Around 25 per cent of this, or around 10 minutes, is related to unplanned incidents by the waterworks. 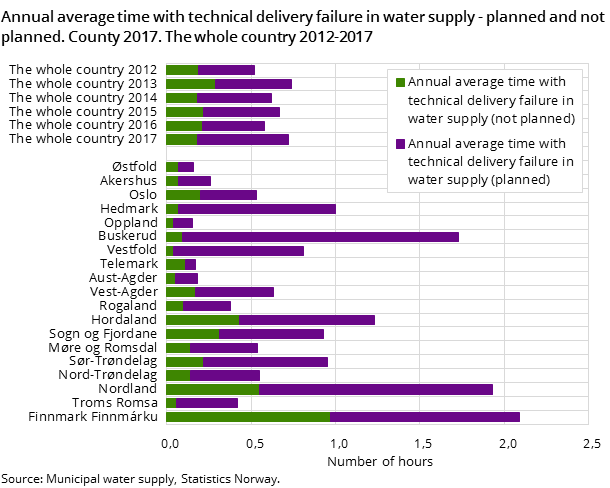 Furthermore, around 3 500 leakage repairs were also estimated to have been carried out on the water pipeline system in 2017, corresponding to less than 1 leak repair per 10 kilometres of pipeline. 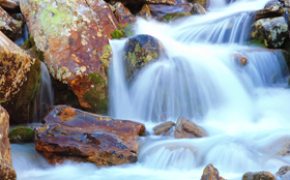 The turnover for local kind of activity units within water, sewerage and waste management and remediation activities rose by 6.5 per cent from 2015 to 2016. 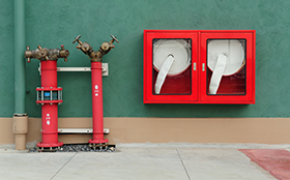 230 km of the sewage system renewed

In 2016, 230 of the 37 400 kilometres of the existing sewage pipeline system was renewed, representing 0.62 per cent. Furthermore, 55 per cent of inhabitants were connected to wastewater facilities that complied with treatment permit requirements.