The Norwegian sustainable development indicators call attention to some problem areas in Norway, but several indicators show a positive or stable trend. The global community faces substantial challenges with respect to resource use, energy and water availability, food production as well as economic and societal development.

Sustainable development may intuitively seem easy to understand, but is difficult to implement and challenging to measure and evaluate. The Norwegian strategy for sustainable development was launched by the Government in the National Budget 2008 . A set of indicators has been established in order to keep track of developments in the policy areas of the strategy.

The condition of the Norwegian economy is considered to be good - this is not surprising in one of the world’s richest countries. National wealth, a measure of the value of our total resources, and the return on it, measured as net national income, has shown an increasing trend in a long period. However, during the last three or four years the growth has decreased. This is to a large degree related to the international financial crisis. The national income per capita in Norway is 1.7 times the average of the OECD countries.

Maintenance of the national wealth is a necessary , but still not a sufficient premise to obtain sustainable development. Economic, environmental and social concerns must all be attended to in a sensible way in order to achieve a development that can be characterized as sustainable.

The public sector plays an important role for total welfare, by facilitating economic activity in the private sector, providing basic educational, health and social welfare services, and by maintaining extensive social security and pension systems. Seen in a longer perspective as shown in the so-called «generational accounts», Norway faces challenges when it comes to ensuring a long-term balance between public sector expenditure and revenues. The basic causes of the need for tighter public sector finances in the years to come are the expenditures needed by an ageing population and that the «oil fund» will grow more slowly as the oil reserves are gradually emptied. 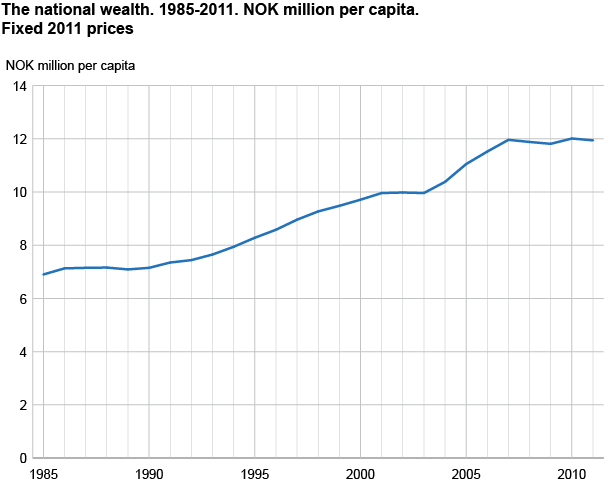 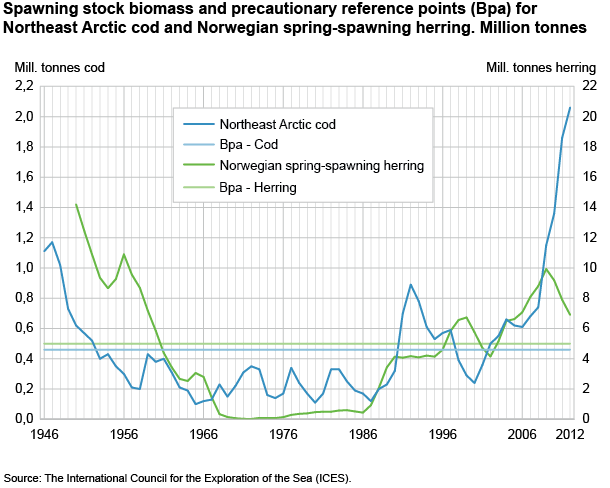 Within different social areas and social conditions there seem on the whole not to be alarming signals. Life expectancy continues to increase, the population’s level of education is increasing, the income disparities in the population are not significantly larger than they were 40 years ago, and the income inequality in Norway is rather low in an international context. Close to 15 per cent of the population between 18 and 66 years receive disability pension or work assessment allowance. This is a high share, but at the same time Norway, in an international context, has high labour force participation and the unemployment rate is low. The welfare arrangements (disability pension, cash-for-care benefits, sickness benefit, unemployment benefits, etc.) that have been introduced, may be an important cause of the high labour force participation. International surveys also show that life satisfaction, a measure of life quality, is high in Norway compared with most other countries.

More efficient energy use, but increasing use

With respect to resources and the environment there are both positive and more challenging trends. Energy efficiency is improving, i.e. the energy consumption relative to value added measured as GDP is decreasing. On the other hand, total energy consumption, which to a large degree is based on fossil fuels, is increasing, and the percentage renewable energy is not significantly higher today than it was forty years ago.

Concerning our fish resources, there has generally been a positive development during the later years. The stock of Northeast Arctic cod is now at an historically high level with a spawning stock biomass of over two million tonnes, by far the highest level in the time series dating back to 1946.

The international aspect of sustainable development is of fundamental significance and an important policy area of the Norwegian sustainable development strategy. A major challenge is to eradicate extreme poverty. Development aid to developing countries can be an important tool to help achieve this. In 2011, net official development aid from Norway was NOK 27.7 billion, the same as in 2010. As a proportion of gross national income (GNI), the percentage decreased from 1.1 to 1.0 per cent, but the Government’s target of 1 per cent of GNI was reached for the third consecutive year. 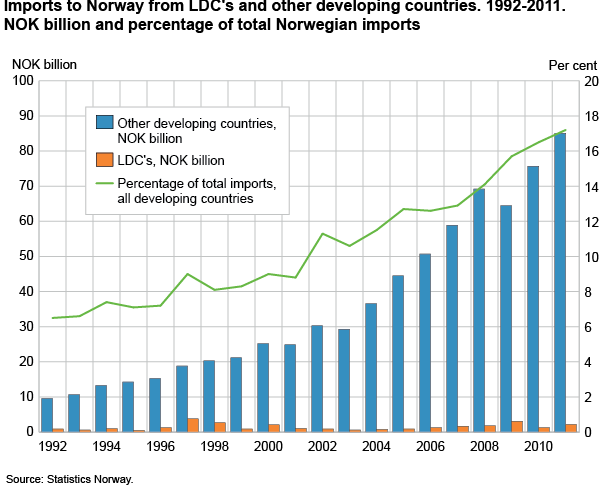 A measure that can promote economic development is to offer developing countries the opportunity to sell their goods and services on the international market. Since the beginning of the 1990’s, total imports to Norway from the least developed countries (LDC’s) and other developing countries has increased steadily both in value and as share of total imports. From 2010 to 2011 the imports increased by 13 per cent to a level of NOK 87 billion, equivalent to 17 per cent of total Norwegian imports.

Sustainable development is primarily a global concern based on solidarity between present and future generations. Even if the current situation in Norway seems satisfactory, there are major challenges at the global level that will also affect the future development in our country.

In rich countries, sustainable development is usually associated with stability. About a fourth of the population in developing countries - UN indicates 27 per cent in the year 2005 - is living below the poverty level. For these, a development based on the existing situation will not be sustainable. Sustainability in this case is rather associated with basic changes. Differences in living conditions might represent a threat against sustainable development, and this applies between nations as well as within nations.

The Millennium Ecosystem Assessment (2005) concludes that «Over the past 50 years, humans have changed ecosystems more rapidly and extensively than in any comparable period of time in human history, largely to meet rapidly growing demands for food, fresh water, timber, fiber, and fuel. This has resulted in a substantial and largely irreversible loss in the diversity of life on Earth. The changes that have been made to ecosystems have contributed to substantial net gains in human well-being and economic development, but these gains have been achieved at growing costs in the form of the degradation of many ecosystem services, increased risks of nonlinear changes, and the exacerbation of poverty for some groups of people. These problems, unless addressed, will substantially diminish the benefits that future generations obtain from ecosystems.»

As the last of four main findings, the MA-report states that: «The challenge of reversing the degradation of ecosystems while meeting increasing demands for their services can be partially met under some scenarios that the MA has considered, but these involve significant changes in policies, institutions, and practices that are not currently under way. Many options exist to conserve or enhance specific ecosystem services in ways that reduce negative trade-offs or that provide positive synergies with other ecosystem services.»

With an estimated world population growth from today’s level of seven billion to over nine billion in 2050, and with a necessary, or at least a desired, welfare improvement for large population groups, major challenges relating to resource use, energy supply, water management, food production, environmental pressures, economic growth and social development will appear. Two billion more people will need places to live, they will require food and water and a decent living standard. Is this compatible with for example handling of the effects of climate change, protection of the world’s ecosystems and poverty reduction? And for the rich countries the question must be asked if it is at all possible to maintain today’s consumption level and patterns. OECD’s report Environmental Outlook to 2050 - Consequences of Inaction (OECD 2012) emphasizes the need for «a deep cultural shift towards «greener» and more innovative sources of growth, and more sustainable consumption patterns.»

At the United Nations Conference on Sustainable Development, Rio+20, in June this year, it was, inter alia, proposed to develop global sustainable development goals which should be measured by appropriate indicators and evaluated by specific targets. The conference also emphasized the importance of a green economy.