58 per cent compliance with treatment permits

In 2017, around 58 per cent of the 4.5 million people who were connected to a wastewater facility measuring at least 50 person equivalents belonged to a facility that complied with its treatment permit. This is up 3 percentage points from the year before.

Furthermore, the statistics show that 34 per cent of the people connected to wastewater facilities of 50 person equivalents (pe) or more do not comply, while the remaining 9 per cent end up in the category unknown compliance (due to missing data).

Compliance with treatment permits constitutes an important part of running a wastewater facility. The authorities therefore issue discharge permits in order to accommodate a healthy and hygienically safe environment to its inhabitants.

Compliance also takes place at a more detailed level – aggregated into chapter 13 and 14 facilities according to the Pollution regulation (in Norwegian only). The municipality constitutes the authority for chapter 13 facilities, while chapter 14 is under the authority of the county administrator.

Three out of five connected to high-grade treatment

In 2017, 62 per cent of Norway’s population was connected to high-grade treatment plants – biological and/or chemical treatment.

Figure 2. Share of the population connected to various types of treatment plants. By county. 2017

High-grade treatment plants have the ability to remove far more of the pollutants from the wastewater before being discharged into rivers and water systems compared to mechanical treatment plants. This applies in particular to phosphorous and organic material, but also other types of pollutants.

For 2017, the discharges of phosphorous (TOT-P) from municipal facilities of 50 pe or more have been estimated at 974 tonnes. Per inhabitant connected, this discharge corresponds to 0.22 kg phosphorous per year. 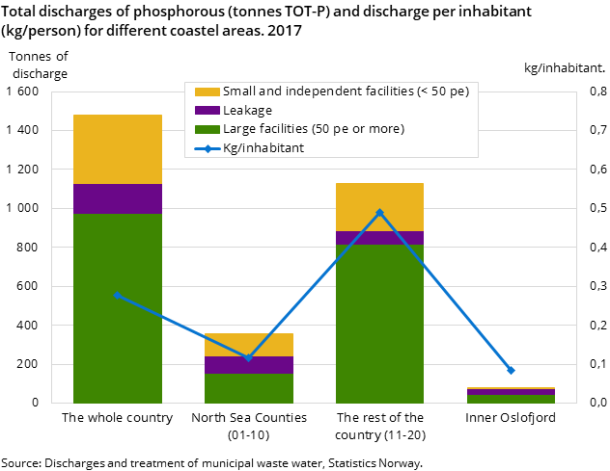 When estimations of leakage from the pipeline system (155 tonnes) and discharges from small independent wastewater facilities (352 tonnes) are also added, the total figure is around 1 480 tonnes for the whole wastewater sector. In comparison, Statistic Norway’s fertiliser survey (in Norwegian only) shows that a total of 15 200 tonnes of phosphorous in the form of inorganic fertiliser and manure was applied to agricultural areas in Norway in 2013. Thus, in a “resource perspective in an ideal world” the wastewater sector could potentially cover around 10 per cent of the phosphorous demand in the agricultural sector.

In 2017, the phosphorous treatment efficiency of the wastewater sector as a whole has been estimated at 69 per cent of the incoming amount. However, there is a big regional variety, and treatment efficiencies are generally higher in counties on the eastern part of the country and in the Trøndelag area, where treatment permits are stricter and recipient capacity is somewhat lower (more sensitive to pollution).

8 per cent increase in costs of wastewater services

In 2017, the total cost for all municipalities was NOK 7.9 billion. This constitutes an increase of 8 per cent compared to 2016. The costs related to the wastewater sector are made up of capital costs and operating costs, and the increase mentioned is due to an increase in both operating and capital costs.

Wastewater fees are determined by the municipalities in accordance with the full cost principle. Local conditions such as patterns of built-up areas, topography, bedrocks in the ground, the need for pumping stations and treatment requirements are all factors behind the variation in fees.