A total of 1.53 million tonnes of hazardous waste was sent for approved treatment in 2017 – an increase of around 4 per cent compared to the year before.

In a broader perspective, the waste amounts have increased by 90 per cent since 2003, , according to updated figures from Hazardous waste. This therefore adds to the trend of the last couple of years in which hazardous waste in society is steadily increasing and showing no signs of slowing down.

In contrast, the gross domestic product (GDP) and population have only increased by 26 and 16 per cent respectively in the same period. Thus, the general trend is that hazardous waste sent for approved treatment is relatively high compared to the growth in the economy and population in general.

It has been estimated that households accounted for around 66 000 tonnes of hazardous waste sent for approved treatment in 2016 (based on declarations of hazardous waste). On average, this constitutes around 12.5 kg per person. Impregnated wood, paint residues, glue, lacquer and waste oil constitute the main components.

The origin and actual source of the hazardous waste

The origin of hazardous waste in the statistics is actually derived from the actor that officially declares the waste to the authorities (or is the exporter in cases of direct export). In some cases, this may differ from the industry/economic activity that has actually produced the waste in question, and it applies in particular to industries like (1) Construction and (2) Wastewater and waste management operations. Thus, these industries may be recorded as having higher waste amounts than would normally be expected (applies in particular to the years 2016 and 2017).

36 per cent to recovery

Around 36 per cent of the approved waste treatment was recovered, i.e. either material recycled (19 per cent) or energy recovered (17 per cent). The remaining 64 per cent was disposed of. 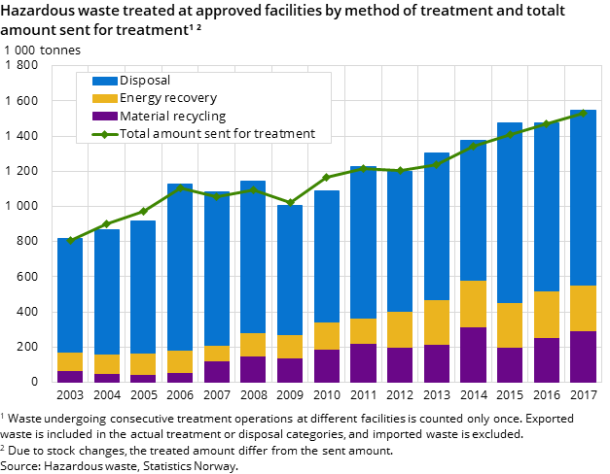 Unknown treatment on its way down

In addition to the 1.53 million tonnes sent for approved treatment, estimates are also made of the amount of hazardous waste sent for unknown treatment. This amount has been estimated at around 13 000 tonnes in 2017. Consequently, out of the estimated total amount generated, 99 per cent is believed to be sent for approved treatment, while the remaining 1 per cent is sent for unknown treatment and considered beyond ‘governmental control’.

Simultaneously, Norway imported circa 400 000 tonnes of hazardous waste from abroad; up 29 per cent compared to the year before.

Imports are dominated by waste containing heavy metals destined for landfill in Norway, and also some waste oil for incineration. Exports, on the other hand, are mainly made up of various types of oil-containing hazardous waste and heavy metal-containing waste.

Imports and exports of hazardous waste require approval from the authorities in order to ensure proper treatment in the receiving country.

1 For 2003 to 2017, waste undergoing consecutive treatment operations at different facilities is counted only once.

Increase in hazardous waste from Svalbard

In 2017, the amount originating from Svalbard was 160 tonnes, an increase of 14 per cent compared to the year before. Oil-containing waste constituted 70 per cent of all hazardous waste from Svalbard.

Hazardous waste produced in Longyearbyen, Svea and New-Ålesund is transported to the Norwegian mainland for treatment there.