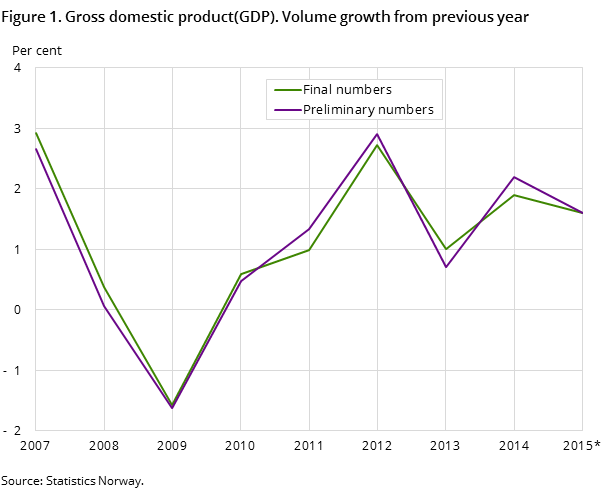 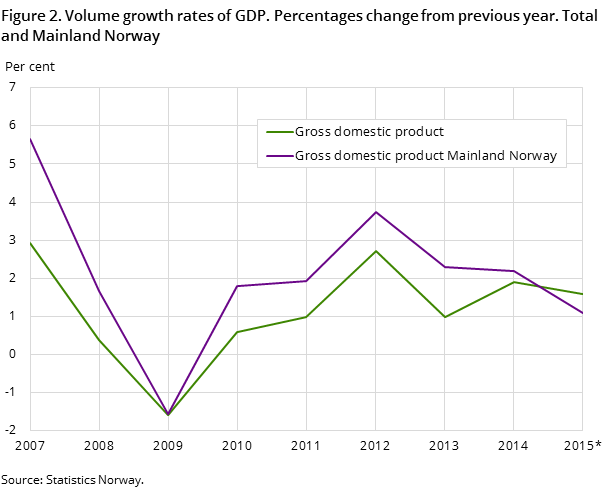 The downward revision of GDP for Mainland Norway is mainly due to less growth in production of other goods. Production of other goods includes construction, which in the final figures showed much weaker growth than previous figures based on production indices for construction. Manufacturing industries are also revised down from 3.5 to 3.0 per cent. Despite many industries in manufacturing showing a better development than in the previous figures, this has not offset the much weaker development of refined petroleum, chemical and pharmaceutical products together with the industry repair and installation of machinery and equipment.

Service activities had a growth of 1.8 per cent, which is unchanged from previous figures. See the revisions in a separate table.

Household consumption had a volume growth of 1.7 per cent in the final figures for 2014, which is the same as shown in preliminarily figures. Despite the unchanged total growth, households’ consumption of goods and services has shown some changes. Consumption of goods has been revised up and services have been revised down slightly. This is the lowest growth in household consumption in 25 years, except for the years 2008 and 2009. Gross fixed capital formation for 2014 is calculated to a growth of minus 0.7 per cent in the final figures. Revised preliminary figures for 2015 show a growth of minus 3.8 per cent.

In both the ANA and QNA, the figures stripped of movements in prices are referred to as volume changes, or fixed price estimates, and this is done to identify the underlying cyclical pattern of the economy.