Final figures for 2013 show a GDP growth of 1.0 per cent. This is an upward revision of 0.3 percentage points from previous estimates. The GDP for Mainland Norway is unchanged since previously published, and had a growth of 2.3 per cent. 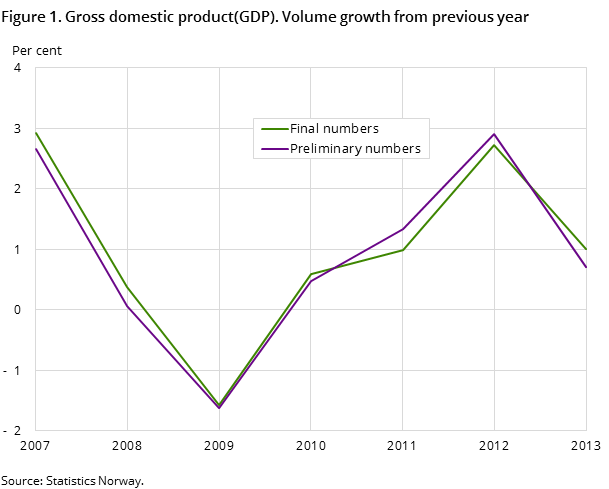 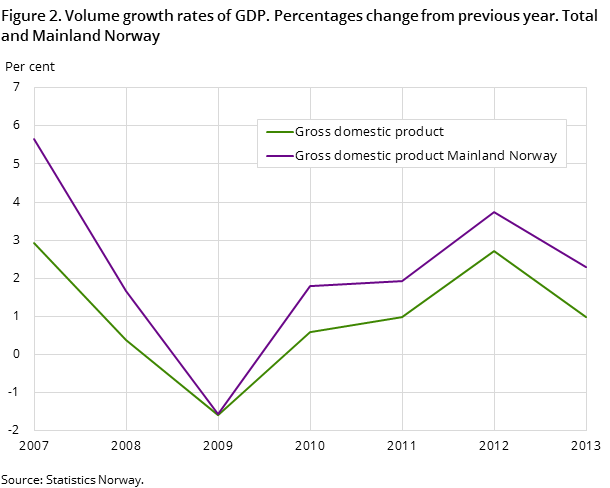 Even if the growth in Mainland Norway is not revised from the preliminary data, there have been changes internally between industries. Production of other goods is revised down by 2.4 percentage points to a growth of 0.1 per cent, which is mostly due to a revision of aquaculture and construction. Service activities are revised up by 1.1 percentage point to a growth of 3.4. The main contributors to this revision is postal and courier activities, and warehouse and support activities for transportation. Manufacturing is unchanged from the preliminary figures and had a growth of 3.4 per cent in 2013. See the revisions in a separate table.

Household consumption had a volume growth of 2.6 per cent in the final figures compared to 2.1 in previous figures. Households’ consumption of goods and services have both been revised slightly upward, but households’ direct purchases abroad have been revised up from 7.8 to 10.1 per cent.

Statistics Norway has made a main revision to the national accounts. The first results from this revision were published on 20 November 2014. The revisions are partly due to new international recommendations on national accounting and partly the results of improved methods of estimations and new sources.

There has been a tradition in Norway to publish annual national accounts figures (ANA) together with the publishing of the 3rd quarter in the Quarterly National Accounts (QNA). Eurostat requires reporting of annual figures within 21 months after the calculation year. To meet this requirement Statistics Norway has decided to publish annual accounts in September, while updated preliminary annual data for 2014 and harmonised quarterly data with the annual data for 2013 will be published in November, together with new quarterly data for 2015.