The result of a main revision of the Norwegian national accounts is an upward adjustment of the level of GDP for all years dating back to 1995, varying from 1.5 to 2.1 per cent. The annual growth rates of GDP are, however, less affected by the revisions. The revisions were carried out due to updated international guidelines on definitions and methodology, as well as new statistical information. 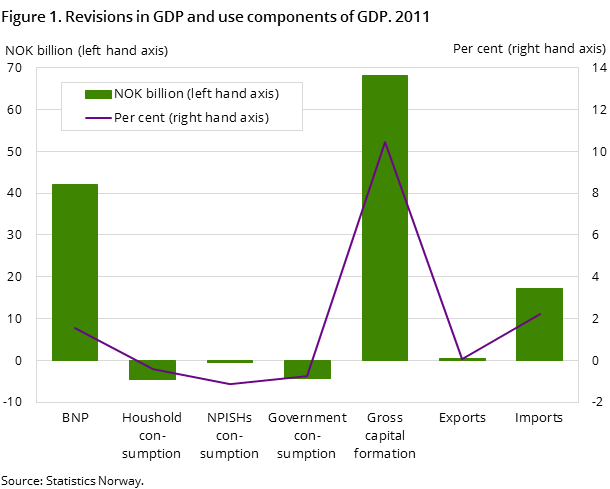 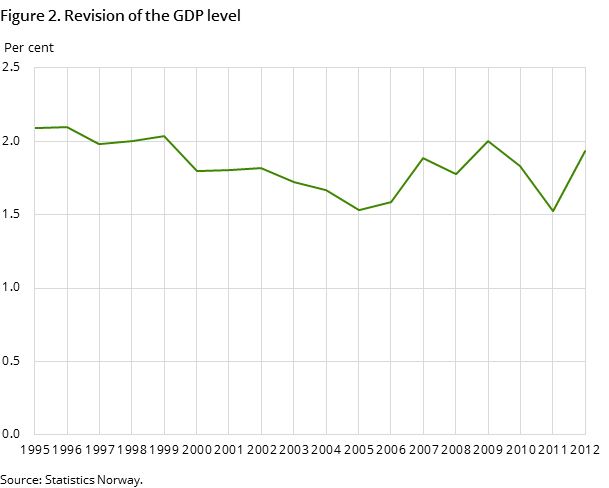 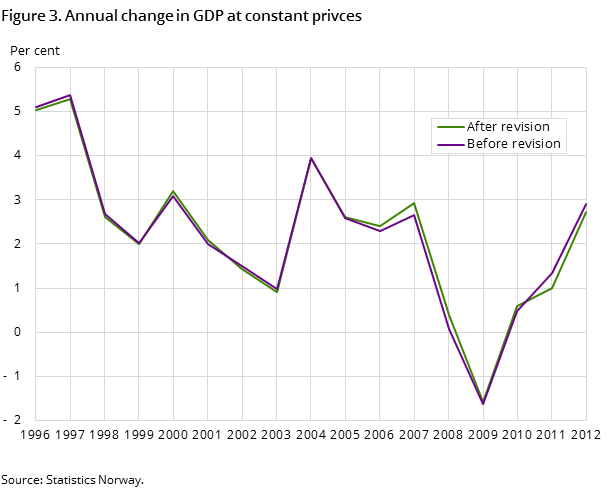 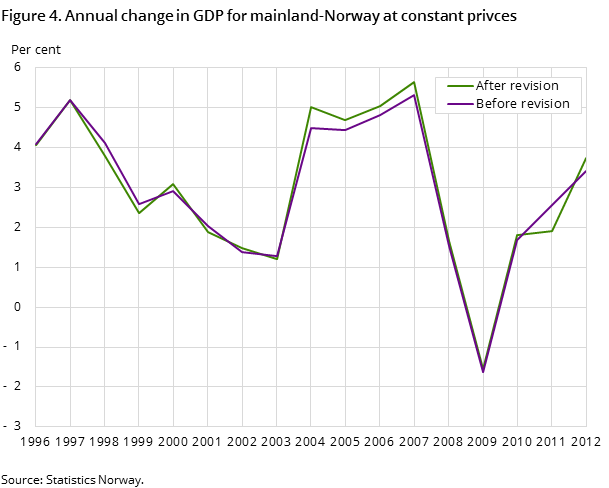 In line with other countries, Norway adheres to the international guidelines on national accounts. These guidelines have recently been updated and include a requirement by the EU's statistical agency, Eurostat, for the European System of National and Regional Accounts 2010 (ESA 2010) to be incorporated into the member states and other EEA countries' national accounts by autumn 2014.

The most important changes are that research and development services (R&D) and major military procurements will now be recognised as investments and not as ongoing operating expenses. For 2011, this means that due to the capitalisation of R&D and military expenses, GDP was increased by around NOK 46.2 billion or 1.7 per cent.

Revisions in the level of GDP

The revisions have raised the level of GDP for all years dating back to 1995. In order to illustrate the effect of the revisions, the new figures for GDP and components at current prices for 2011 are compared to the old figures. For 2011, the total GDP is adjusted upwards by NOK 42 billion to NOK 2 793 billion or 1.5 per cent. Mainland Norway GDP was adjusted upwards by NOK 83 billion and value added within oil activities and ocean sea transport were revised downward by NOK 41 billion. These revisions were heavily affected by the new definition of Mainland Norway, which now includes several petroleum-related service activities that were previously excluded.

If we examine the revisions of the use components in the GDP the main picture is a downward adjustment in the consumption of goods and services in both households and general government, and an upward adjustment in gross capital investments, see figure 1.

The size of the adjustment of the level of GDP fluctuates from year to year. This is because changes in definitions will have a varying impact and because some revisions that are not related to changes in definitions only affect a single year or a few years. As shown in figure 2, the adjustments are between 1.5 and 2.1 per cent of the GDP. On average for the period 1995-2012, the annual upward adjustment of the GDP at current prices has been 1.8 per cent.

Minor changes to the GDP development

Although the level of the national accounts figures has been revised, this has not had much effect on the annual changes in GDP. Figure 3 shows the annual growth rates in GDP at constant prices before and after the revisions.

Annual growth rates in GDP at constant prices were only subject to minor adjustments prior to 2007. For 2007 and 2008, GDP growth rates were adjusted upward by just under 0.3 percentage points, and 2011 saw a similar downward adjustment.

Table 39: GDP and Revisions to GDP. NOK billion unless otherwise stated and Table 40: Use components of GDP. Revisions in NOK billion present the GDP revisions for selected years. The tables clearly show that the capitalisation of R&D had the greatest impact on the total GDP adjustments.