From free research to statistics regulated by law

History of national accounts in Norway 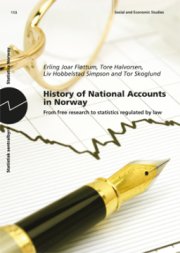 Open and read the publication in PDF (8.9 MB)

The first phase of the history of national accounts in Norway started in the 1930s when Professor Ragnar Frisch at the University of Oslo tried to design a general national accounting system. The National Accounts Unit was established in Statistics Norway in 1946 and was led by Odd Aukrust. The empirical results were first published in 1952 and covered the periods 1930-1939 and 1946-1951.

Already in the pioneering years of Frisch and Aukrust there was the standpoint that "real phenomena" was what mattered. It also reflected the particular interest public authorities showed in the real flows in economy. The statistical base early became considerably better for production statistics than for income and financial statistics. Therefore, the production approach was the main approach for calculating GDP. Norway is one of few countries that very early (since 1952) had input-output tables integrated in the annual national accounts. They played a considerable analytical role in the economic models constructed by Statistics Norway in the 1960s and later, as an empirical basis for use in the work on national budgeting and macroeconomic planning as a whole.

Statistics Norway has carried out six main revisions of the national accounts, including the last one published in 2011. The 1973 and 1995 revisions were the most important ones. The 1995 revision focused on implementing 1993 SNA and ESA 1995. Norway had an obligation to implement ESA 1995 according to the European Economic Area Agreement. The 1995 revision amended quite considerably earlier estimates; gross domestic product was revised upwards by about 10 per cent.

The oil industry, entering the Norwegian economy in the 1970s, has created challenges to the national accounts, in terms of compilation principles. Major changes in the oil price contributed to base-year-problems in the volume calculations in the 1980s. GDP Mainland Norway (GDP exclusive the oil and ocean transportation industries) has become an important and frequently used variable in the Norwegian national accounts.

History of national accounts in Norway. From free research to statistics regulated by law

About Social and economic studies

The series Social and Economic Studies consists of hitherto unpublished studies in economics, demography and other areas of research in Statistics Norway.