Deep economic crisis – but some bright spots in sight

The Norwegian economy appears to be picking up after the country shut down in March, but lower international demand and low oil prices will impact on economic development for several years to come. We expect a gradual rise in interest rates from 2022.

The outbreak of the coronavirus and the subsequent infection prevention and control measures have caused a huge setback in the Norwegian economy. According to the national accounts, mainland Norway’s GDP fell by 4.7 per cent from March to April, and was thus 11.3¹ per cent lower in April than in February.

‘The Norwegian economy is in deep crisis, but the outlook has improved in recent weeks. Since our previous forecasts from April, we have adjusted growth for 2020 upwards by as much as 1.4 percentage points. This means that Norway’s mainland GDP is expected to fall by just under 4 per cent in 2020,’ according to Thomas von Brasch, Statistics Norway researcher.

This estimate revision reflects new information on developments in the course of infection, various measures and economic activity. The infection rate has been reduced faster than expected, the infection prevention measures have been eased to a greater extent and the scope of the financial packages has increased more. There are also signs of a faster recovery in economic activity than looked likely at the end of April.

‘Although the upturn appears to be coming sooner than expected, the situation in the Norwegian economy is still serious. Lower international demand and low oil prices will affect economic development for several years to come, even if the infection rate in Norway remains low,’ says Thomas von Brasch.

As a result of the worldwide pandemic, our trading partners are currently experiencing a downturn that is unprecedented in modern times. However, following a major fall in GDP in the first half of this year, we expect growth to pick up sharply again towards the end of the year and early 2021.

‘However, this recovery is not expected to be strong enough for our trading partners’ GDP to reach previous levels. Towards the end of the forecast period, which extends to 2023, we expect growth in the global economy to be significantly below what we would have characterised as a normal level before the crisis,’ says Roger Hammersland, Statistics Norway researcher.

Great uncertainty about the further development

The Norwegian economy is now unusually sensitive to further disturbances. The key policy interest rate has been reduced to 0 per cent, which is considered to be close to the lower threshold for the interest rate. This means that interest rates, which are normally the main remedy for cyclical downturns, will not be able to relieve the situation if the economic outlook worsens. This adds to the already considerable uncertainty about the future course of the Norwegian economy.

‘We have assumed in our forecasts that the infection rate will be kept at a low level with few active infection prevention measures, but there is a risk of a second wave of infection, both nationally and internationally. In such a scenario, the economic downturn could be both deeper and considerably more prolonged than we currently envisage,’ says Thomas von Brasch.

More of the responsibility falls on the fiscal policy

Since 12 March 2020, often referred to as the day Norway shut down, appropriation and legislative proposals have led to substantial spending increases in the fiscal budget.

‘The fiscal rule requires that over time, the use of oil revenues should constitute 3 per cent of the Government Pension Fund Global, but that great emphasis should be placed on smoothing out fluctuations in the economy to ensure good capacity utilisation and low unemployment. We can therefore say that the expansionary policy in 2020 is in line with the fiscal rule,’ says Thomas von Brasch.

In the years ahead, fiscal policy is expected to normalise, and the structural non-oil public deficit, which is the structural oil-adjusted deficit as a share of the oil fund, will be gradually reduced to 3 per cent by 2023.

Monetary policy is often referred to as the first-line of defence in stabilising the economy. In just under two months, Norges Bank has reduced its key policy rate three times, by a total of 1.5 percentage points to 0 per cent. In addition to lower interest rates, several measures have been introduced to reduce borrowing costs and help maintain activity through new lending to businesses.

‘The interest rate is expected to remain at a record low for some time to come, but we believe there will be a cautious interest rate increase from 2022,’ says Thomas von Brasch.

At the end of 2023, the key policy rate is expected to be 0.75 per cent. This is still significantly lower than what can be considered a normal interest rate level of between 2 and 3 per cent.

Inflation expected to stabilise at around 2 per cent

According to our calculations, inflation measured by the CPI will be 1.2 per cent in 2020. Low energy prices and expectations that that they will remain low throughout the summer and autumn will help keep inflation relatively low.

The infection prevention and control measures introduced in March led to an immediate and sharp fall in household consumption in goods and services. The monthly national accounts show that the fall in goods consumption in March made a partial recovery in April, with growth of 2.5 per cent. Card transaction data shows signs that service consumption also picked up from mid-April and throughout May.

‘We believe that consumption trends will improve further as infection prevention and control measures are eased. Some of the increase in savings seen since March will probably be used on consumption in the coming months,’ says Thomas von Brasch.

Towards the end of 2021, we assume that total consumption will be back to the level before the coronavirus crisis hit the Norwegian economy. With the prospect of higher real disposable income and falling unemployment, consumption will grow by an annual average of around 3 per cent in the last two years of the forecast period.

Even though real interest rates are now low, the prospect of lower real income growth, together with somewhat lower population growth and continued uncertainty about economic developments, is likely to lead to a moderate fall in house prices in parts of 2020. As the explanatory factors for house price trends lean in slightly different directions, we expect a cautious rise in house prices in 2021.

‘In 2022 and 2023, developments in the activity in the Norwegian economy will normalise, and it is expected that interest rates will still be at a low level. This will contribute to a growth in house prices of around 3 per cent in the period 2022–2023,’ says Thomas von Brasch.

Marked fall in business investment in 2020

Investment trends are highly sensitive to reduced demand. In addition to lower demand, the uncertainty surrounding the future economic development will dampen businesses’ appetite for investment. We estimate that business investment will fall by as much as 16–17 per cent this year.

For the years 2021 to 2023, the calculations show a weak but positive growth in business investment. With this development, the investment level will be about 10 per cent lower in 2023 compared to 2019.

From 10 March to 31 March, the number registered as unemployed (100% unemployed) with the Labour and Welfare Administration, which also includes laid-off workers, increased from around 65 000 to around 300 000. Since then, this figure has gradually declined. On 2 June, the figure was around 171 400.

‘We expect the improvement in the labour market to continue going forward. Measured by the Labour Force Survey (LFS), unemployment is expected to be just over 5 per cent as an annual average for 2020. It will then gradually fall to just over 4 per cent in 2023,’ says Thomas von Brasch.

As a result of the coronavirus pandemic, this year’s wage settlement has been postponed until 3 August. The negotiations will be conducted in a context of high unemployment, which probably means that the contribution from the negotiated tariff supplements will be relatively low this year. Lower international activity levels and the associated reduction in activity among export-oriented companies this year will also push down the contribution from the tariff supplements. We expect growth in average annual wages of 2 per cent in both 2020 and 2021. This means that real wages will increase in 2020. However, with higher inflation expected next year, real wages will fall in 2021 by about the same amount they are expected to increase in 2020. In 2022 and 2023, real wage growth is expected to be in excess of 1 per cent.

After the substantial weakening of the krone in the second half of March, Norges Bank took remedial action in the form of a currency intervention. The depreciation has since been reversed to a large extent, possibly also as a result of the increase in oil prices. At the start of June, one Euro costs NOK 10.8, while the US dollar is priced at NOK 9.7. Our forecasts use unchanged exchange rates throughout the forecast period. 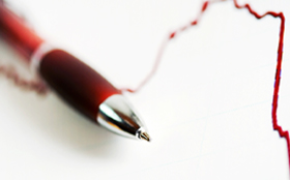 This follows a 6.9 per cent fall from February to March, and Mainland GDP was thus 11.3 per cent lower in April than in February. The underlying data indicates some increase in economic activity towards the end of the month.