Norwegians exercise more than before

Four out of five Norwegians exercise at least once a week. This represents an increase of nearly 20 percentage points over the past 15 years. The level of activity has increased most among the elderly.

According to the Survey on living conditions 2016, 83 per cent of the population aged 16 or older report exercising at least once a week. This level is stable since the survey in 2013. Compared to earlier surveys, however, the level of physical activity in the population has clearly increased. In 2001, 66 per cent exercised on a weekly basis, while this percentage was 73 in 2004 and 2007. 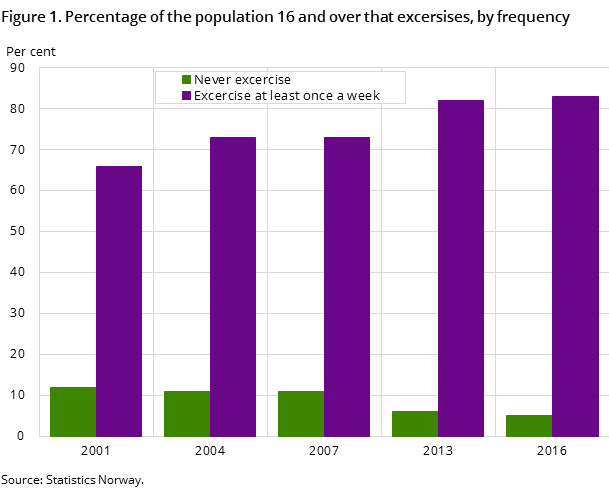 Only five per cent never engage in any form of exercise or sports activities. These results are in line with the Survey on health, which finds that the lifestyle habits of the Norwegian population are improving.

Young people are more active than the elderly…

As before, young people have a higher activity level than older people. While more than 80 per cent of persons aged 16-66 years exercise every week, the corresponding percentage among persons over 66 is 75 per cent. In the age groups between 16 and 66 years, 2-5 per cent never exercise, and the corresponding figure for the oldest age group is 12 per cent. 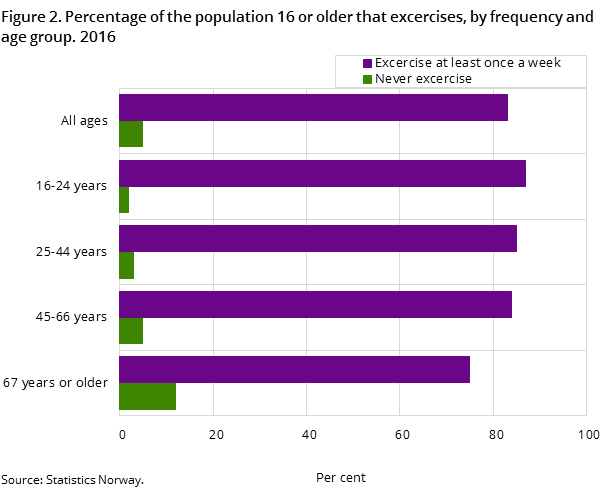 … but the elderly are more active than before

At the same time, the activity level of the elderly has increased over time among both men and women. The share of women aged 67 years or over that exercises on a weekly basis increased from 51 per cent in 2001 to 73 per cent in 2016. Among men in this age group the percentage that exercises every week increased from 61 to 77 per cent. In 2001, 26 per cent of persons 67 years or older reported never exercising, which is more than twice as many as in 2016.

The most common exercise activity in the age group 67 years or older is fast walking: More than 60 per cent have done this in the past year. Some elderly people also engage in activities such as cycling, cross-country skiing and strength training. Approximately 15 per cent participated in each of these activities. Contact sports and high-intensity training, such as ball sports, combat sports and jogging are less common among the elderly. 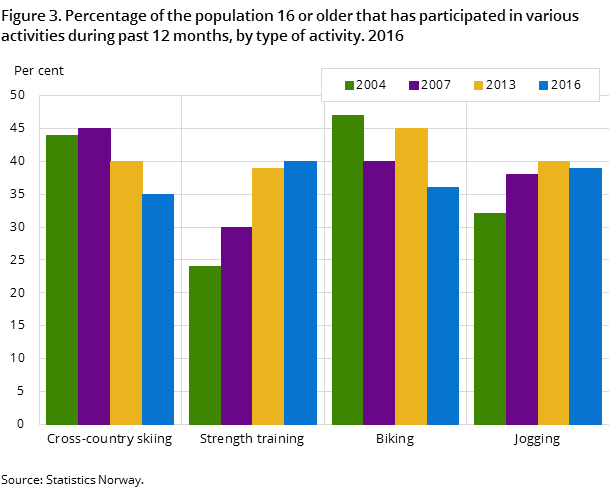 Fast walking is also the most common form of exercise for the population as a whole. Seventy-three per cent report having engaged in this activity during the past 12 months. Other common types of exercise are strength training (40 per cent), jogging (39 per cent) and other outdoors activities such as cycling (36 per cent) and cross-country skiing (35 per cent). Strength training is the activity that has increased the most over time. Approximately 40 per cent did this type of exercise in 2013 and 2016, compared with 24 per cent in 2004. Jogging has also become more common during the same period.

Although cycling and cross-country skiing are popular forms of exercise, participation in these activities has decreased compared to previous surveys. While 35 per cent had been cross-country skiing in 2016, the share was 44 per cent in 2004. The share that has been cycling has fluctuated between 36 and 47 per cent in the years 2004-2016, but there is no systematic decline. Differences in weather conditions from one year to the next may be one factor affecting participation in such outdoor activities.

A new question in the 2016 survey relates to exercise on spin bikes and other types of gym equipment for endurance training. One in three have done this form of exercise. This type of activity is popular among both men and women, and it is more frequent among the young than among older people. In the youngest age group, 16-24 years, 53 per cent of the men and 62 per cent of the women have engaged in this type of endurance training in the past year. 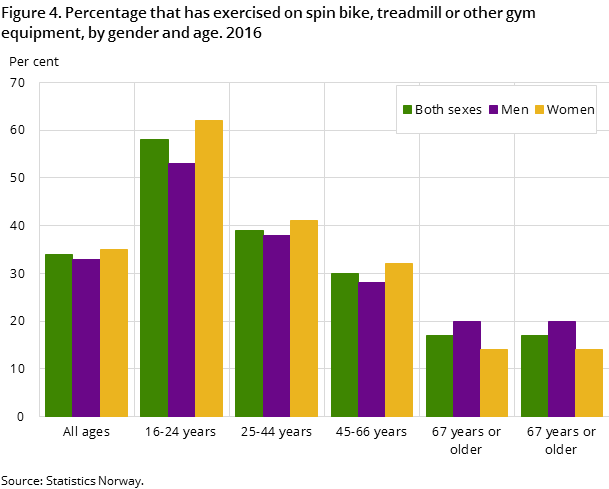 Women and men report similar levels of physical activity. However, there are differences in the choice of activities. More men play ball sports, while it is more common for women to participate in dance and group exercise classes, aerobics and yoga. More men also play golf. The highest share of golfers is found among men in the age group 16-24 years: 11 per cent in this group have been golfing in the past year, compared with 4 per cent in the population as a whole. Overall, young men have the highest participation level in all types of ball and team sports. One exception is handball, where the activity level is higher among young women.

Small disparities between areas of residence

Generally, there are small disparities in the level of exercise between persons in different areas of residence. A slightly higher percentage of inhabitants in cities with 100 000 or more inhabitants exercise every week compared with inhabitants in rural areas. Disparities between regions are also small, but Trøndelag has the highest share of people that exercise at least once a week.

There is an evident relationship between education and physical activity level. While 90 per cent of persons with a university education exercise weekly, the corresponding percentage is 75 among persons with only a primary or lower secondary education. The level of activity also varies according to self-reported economic status. Students and the working population have the highest percentage of weekly exercisers, while the disabled and pensioners have the highest share of non-exercisers. However, the activity level is generally high in these groups as well: 76 per cent of the pensioners and 70 per cent of the disabled exercise at least once a week.

The Survey on living conditions is an interview survey conducted among a representative sample of the Norwegian population. The survey is conducted by telephone, and in 2016 a sample of approximately 11 500 individuals aged 16 years or older was drawn. A total of 6 859 individuals participated in the survey, which represents a 60 per cent response rate.

See “About the statistics” for more details about the survey.