Private households spent an average of NOK 436 000 on goods and services in 2012; a real increase of 5,7 per cent compared to 2009. Spending on housing, water, electricity, gas and other fuel has levelled out after several years of growth, and spending on recreation and culture has declined. 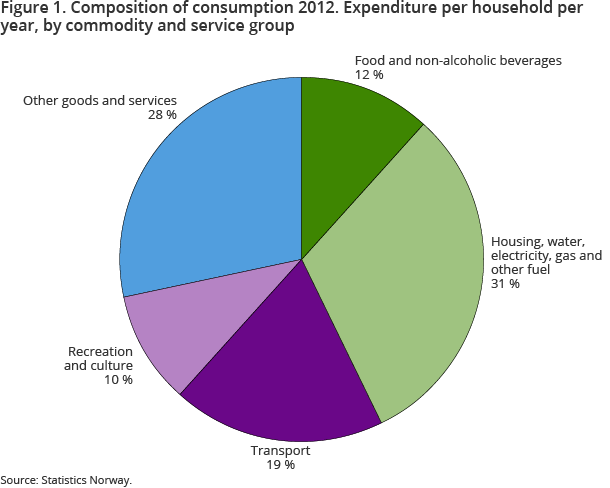 Housing, water, electricity, gas and other fuel is still the largest item of expenditure, with 31 per cent of total consumption (figure 1). The second largest area is transport, with 19 per cent. The next areas are food and non-alcoholic beverages, with 12 per cent, and recreation and culture by 10 per cent. 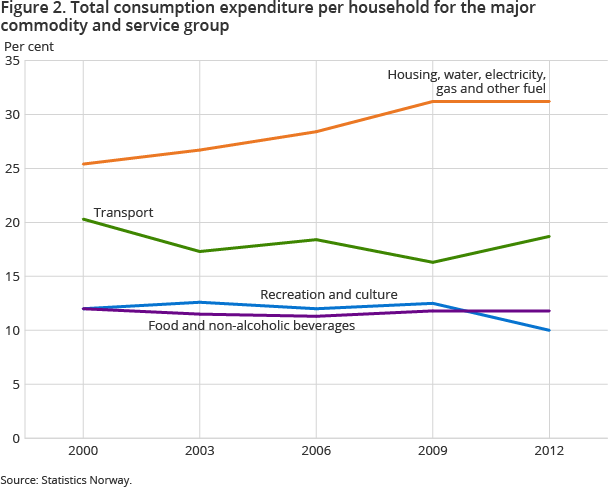 Spending on housing, water, electricity, gas and other fuel has levelled out after several years of growth, and spending on recreation and culture has declined (figure 2). The main features of the household consumption pattern have changed little since the beginning of this millennium. 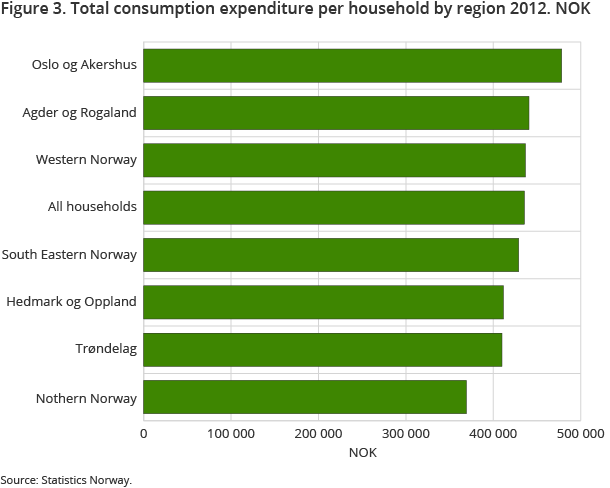 Households in the region of Oslo and Akershus spent most money in total; NOK 478 000 per household on average. Northern Norway had the lowest total average consumption off the regions (figure 3).

The degree of urbanisation is also significant for consumption. Households in the major cities of Oslo, Bergen and Trondheim have an average consumption of NOK 436 000, which is equivalent to the national average. The average of sparsely populated areas was NOK 405 000 per year. 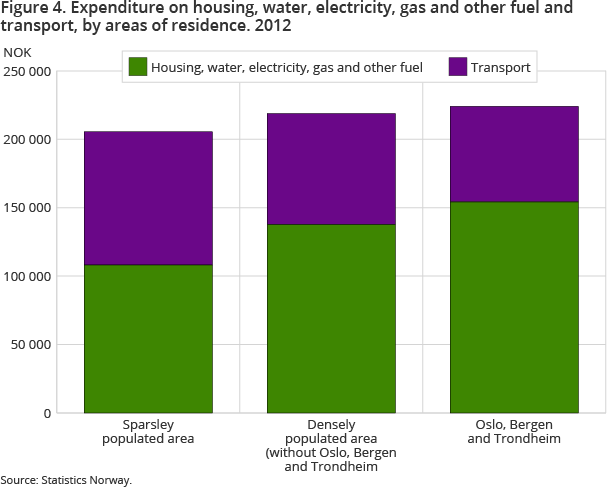 Transport costs show a correlation with the degree of urbanity (figure 4), and these are often cited as an additional cost of living in rural areas. Households living in rural areas had the highest transport costs both as a share of consumption (24 per cent) and amount (NOK 97 000) in 2012. In comparison, Oslo, Bergen and Trondheim had the lowest percentage (16 per cent) and amount (NOK 70 000). The trend shows that the differences in transport costs have increased between residential areas since the beginning of this millennium.

Spending on housing, water, electricity, gas and other fuel increases with the degree of urbanity in the opposite direction of the transport costs. In rural areas, these expenses are NOK 108 000 per household (27 per cent) compared with NOK 155 000 (35 per cent) in Oslo, Bergen and Trondheim in 2012. In recent years, the differences have increased. 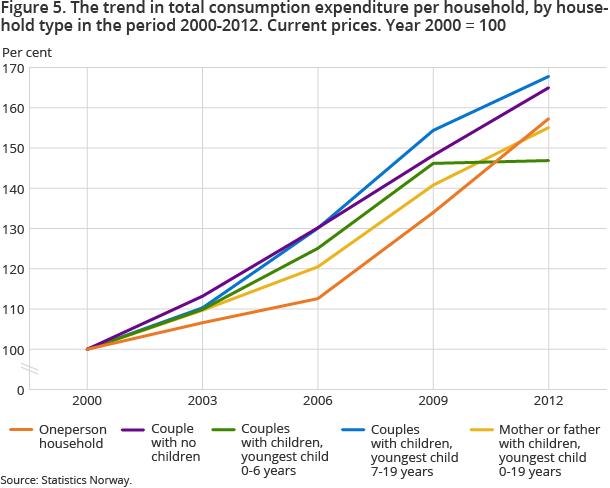 Couples with children aged 7-19 years and couples without children had the strongest growth in consumption of 68 and 65 per cent respectively between 2000 and 2012 (figure 5). Single-person households fell behind in the first years after the turn of the millennium, but had increased consumption growth by 2006. Couples with the youngest children aged 0-6 years had a relatively strong growth to 2009. Growth has since levelled off. 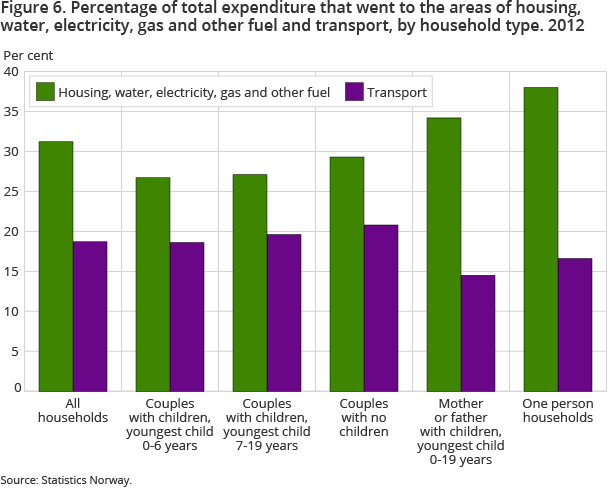 Differences in consumption patterns between different types of households are large and have changed little. For example, single-person households have the lowest expenditure on housing in NOK compared to the other types of households, but also have the highest housing cost share of total expenditures (figure 6). Couples with children have the highest housing cost in NOK, but have the lowest proportion of spending on housing.

Increase in total consumption since 1958

The average household consumption expenditure in 1958 was NOK 11 100 per year, while the average household in 2012 spent NOK 436 000. If we calculate the 1958 amount to 2012 values, we get about NOK 129 000. This shows there has been a strong growth in consumption, but there has also been a structural change in consumption patterns. In 1958, the spending on food and non-alcoholic beverages was on average 40 per cent of total spending, while this share in 2012 was only 12 per cent. This is an expression of the development in living conditions that has occurred since 1958.