Health at a Glance 2016 - Health Conditions in Europe and Norway

Three times as many sick days among obese Norwegians

In Health at a Glance, 2016 (HAAG) OECD assesses labour market outcomes of selected modifiable risks to health such as smoking and obesity, and related chronic diseases for people aged 50-59. Norway is not included in the data. Read more about the data here.

People with behavioural risks to health are less employed

Figure 1 shows how modifiable risks to health such as obesity and smoking impact the employment rate. On average, the proportion of this group in employment is 10 per cent lower compared to their peers who do not share their behavioural risks. This is particularly obvious in Spain, where less than half of obese people are employed. Those who suffer from chronic diseases also have a lower employment rate than their peers, and there is clearly a barrier to the labour market when suffering from at least one chronic disease. 8 in 10 Danes with at least one chronic disease are in employment, not only beating the European average of 6 in 10, but also the average for healthy Europeans. 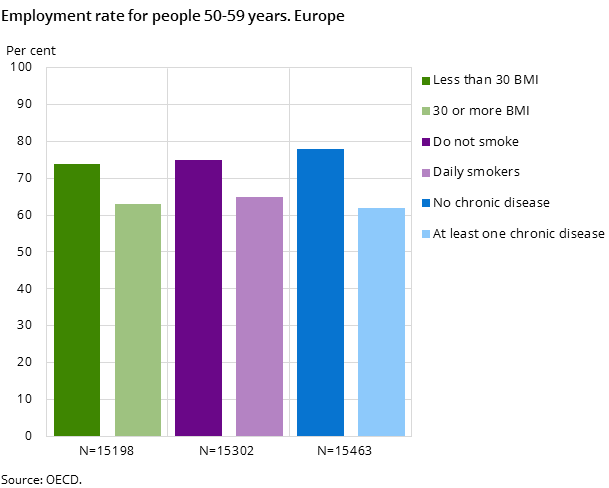 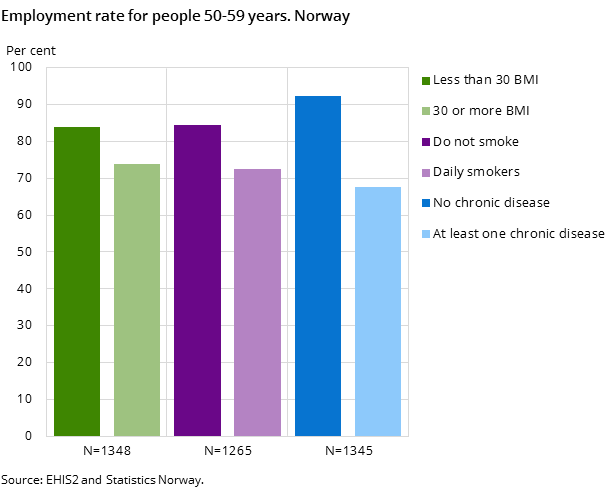 Fewer obese Norwegians aged 50-59 are in employment than those with a BMI below 30. 7 out of 10 are employed, while the corresponding figure for their non-obese peers is 8 in 10. Obesity or the lack thereof appears to be quite an important factor in relation to employment. Results concur with the European average, where lower proportions of employment are consistently observed among obese people. Norway has better employment rates among both obese and non-obese than Europe.

Sick days can be used as a measurement of productivity in the workplace. Figure 3 indicates that for Europe, chronic diseases increase the amount of sick days more than the respective behavioural risks discussed. Europeans suffering from at least one chronic disease take eight extra sick days, which is twice as many as those without chronic diseases. 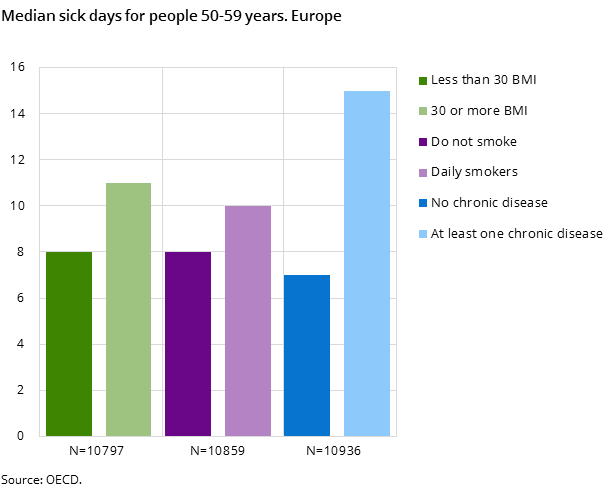 Figure 4 shows a similar situation in Norway, albeit with clearer disparities. Obese Norwegians take the most sick days compared to daily smokers and people with one or more chronic diseases. The number of sick days reported for the obese is three times higher than for those who with a BMI of less than 30. The pattern for chronic diseases and daily smoking is the same as the European trend, but Norway has fewer sick days in general. 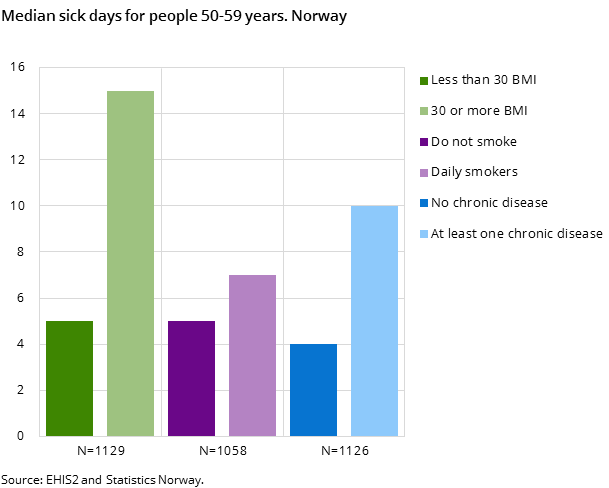 Obese Norwegians aged 50-59 have had 15 sick days during the last 12 months; 10 days more than their non-obese colleagues. Along with Denmark and Switzerland, Norway has the lowest number of sick days in general among the non-obese.

Daily smokers have slightly more sick days than non-smokers. Employees aged 50-59 who smoke on a daily basis have seven sick days; two more than their non-smoking colleagues. Norway is low in the scale in a European context, with Norwegian daily smokers taking the fewest sick days, along with Denmark, Sweden, and Switzerland.

Organisation for Economic Co-operation and Development (OECD). 2016. Health at a Glance.