People in Oslo are healthiest in Norway

The decrease in daily smoking is one example of improved health behaviour. However, other lifestyle habits are changing at a slower pace. Weight (BMI) is increasing at a country level. For example, fewer people suffer from being overweight and obesity in Oslo, while Oppland, Telemark, Nord-Trøndelag and Finnmark are well above the national average. The healthiest part of the population lives in Oslo.

Women have more health-promoting lifestyle habits than men. They are less likely to be overweight, are more active and consume less sugary soft drinks. Daily smoking and drinking of sugary soft drinks have dropped among both women and men, but weight is increasing. These are some of the results of the survey on health, care and social relations conducted in 2015. 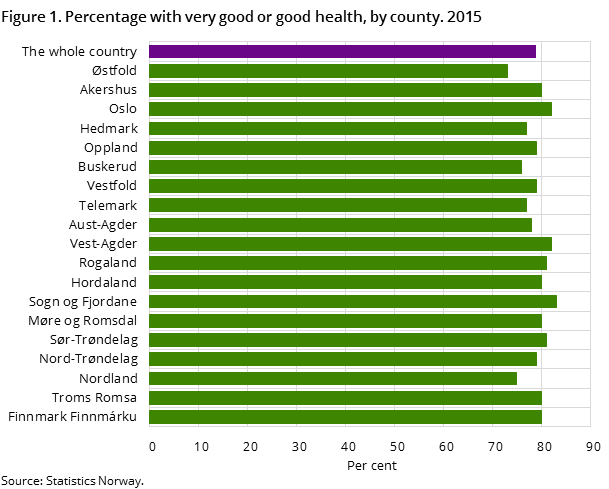 Best health in the capital

For the first time, Statistics Norway is presenting results from the survey on health at a county level. In some counties, the population appears to fare better compared to the national average and to other counties in several of the variables that are registered in the survey. For example, Oslo has many people with good self-assessed health and good dental health, and many with healthy lifestyle habits. Only 19 per cent of the population of Oslo is overweight (BMI of 27 or more) compared to the national average of 28 per cent. Fewer people in Oslo also drink sugary soft drinks every day, and more people walk at least half an hour a day– 38 as opposed to 28 per cent. 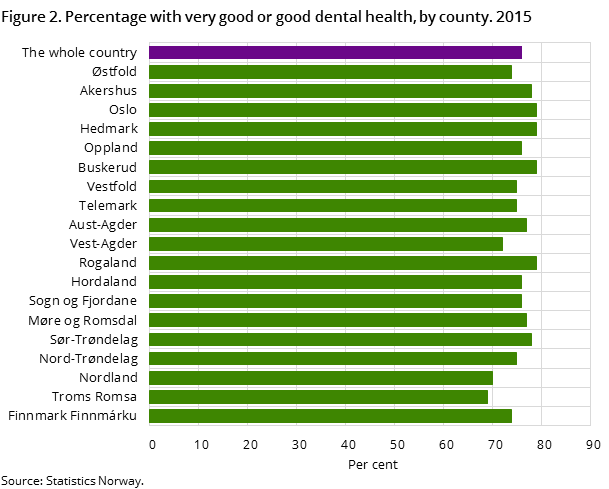 The counties where many are overweight, eat little fruit and vegetables, drink a lot of sugary soft drinks and do not take much exercise, are also the counties with the lowest life expectancy, and lowest increase in life expectancy over time. Even if the picture is not quite consistent, there are still some counties that have an accumulation of unfavourable health behaviour.

Women in the counties Østfold, Hedmark, Nordland and Finnmark are above the national average in the percentage that never exercises. Furthermore, the percentage of women who are overweight is higher in Oppland, Telemark, Nord-Trøndelag and Troms compared to the national average (23 per cent), while Hedmark and Telemark have the highest shares of obese women compared to women in other parts of the country. 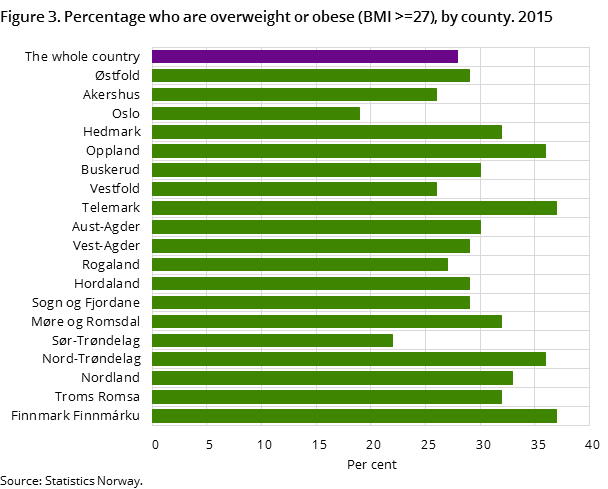 Women living in Østfold, Telemark, Oppland and Finnmark have a lower life expectancy than the national average for women. Aust-Agder has also had a slower growth in life expectancy among women than in other counties.

One in four men in Østfold never exercise

Country-figures show that one in three men is overweight. Men in Telemark, Møre og Romsdal, Nordland and Finnmark on, are well above the national average when it comes to being overweight. One in two men living in Finnmark are overweight (BMI >= 27).

One in four men in Østfold never exercises. Nevertheless, men in Østfold do not seem to have more of an obesity problem than the average for men in the rest of the country, even though they are eager consumers of sugary soft drinks. 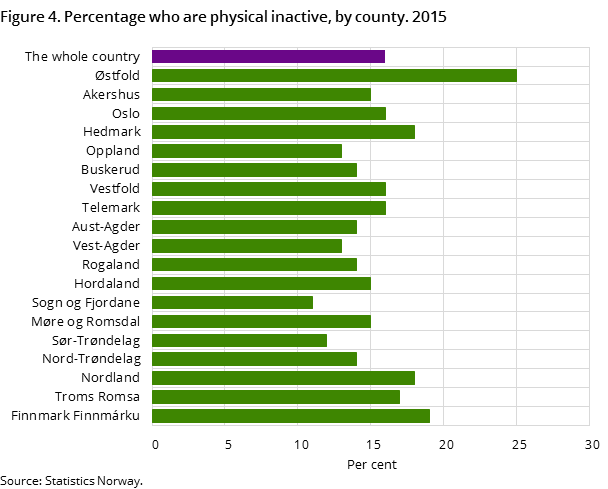 Healthy youths, but 40-year-olds should be careful

There has been a major decrease in daily smoking, but little change in occasional smoking among young men aged 16-24 years. The use of snuff has remained at a relatively high level, slightly above 20 per cent. Among men aged 25-44 years, 13 per cent are daily smokers and 20 per cent take snuff on a daily basis. 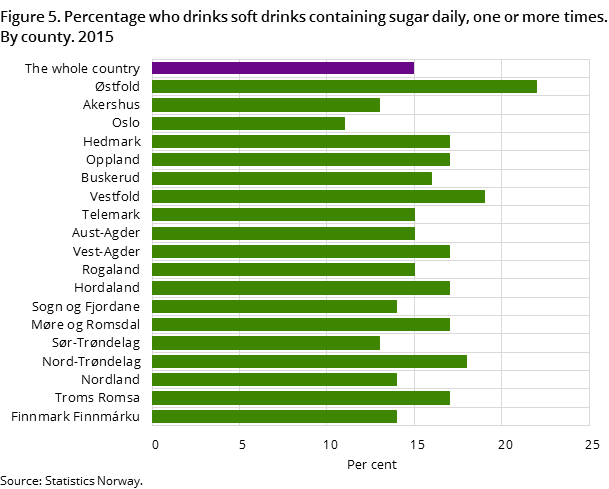 There has been a marked decrease in daily smoking among young women, and occasional smoking is also down. More and more women are taking snuff in both age groups. The percentage of young women taking snuff has tripled from 2008 to 2015.

The youngest women and youngest men exercise to a similar degree. However, more of the young women 24-44 years, than young men, say that they exercise at least once a week, while fewer say they never exercise. Obesity is not particularly common among the youngest women, but the percentage doubles for women in the age group 25-44 years.

Data from the health interview survey is representative for counties and the whole country, for the population living in private households. A sample of 8164 persons aged 16 years and over was interviewed by telephone. The response rate in 2015 was 59 per cent. Since this survey has been merged with the European Health Interview Survey (EHIS), some indicators are no longer comparable.

The greatest uncertainty will be for analyses by gender and county, and numbers based on such small sub-samples will often not be statistically reliable at 0.05 level.