There are fewer people smoking daily today compared to 10 years ago, but the use of snuff has increased in recent years – particularly among younger women. One out of six women aged 16-34 years used snuff daily in 2016, and use among young women is almost as extensive as among men of the same age.

The proportion of daily smokers has remained stable in recent years. In the same period, use of snuff increased, but more people still smoke daily than use snuff. There are fewer daily smokers and fewer who smoke occasionally among both men and women. In 2001, one out of three smoked daily, today one out of ten smoke daily, and this applies to both men and women. The proportion of occasional smokers has remained stable at around 10 per cent since 1998. 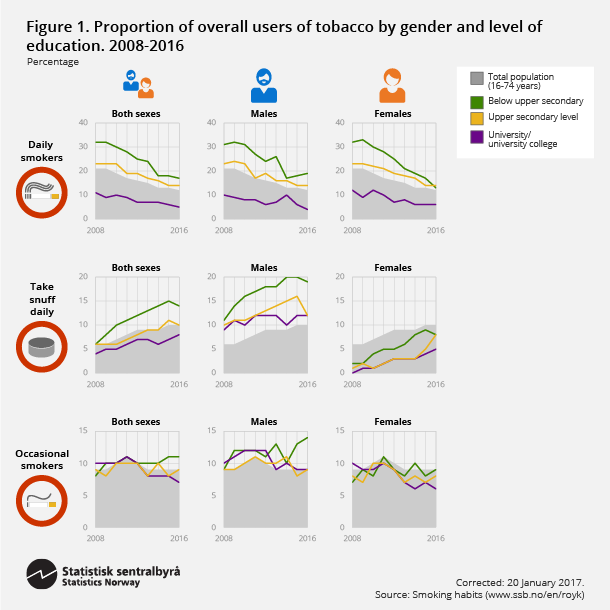 Daily use of snuff has increased steadily since 2008. There is little change in how many use snuff occasionally. Use of snuff has primarily increased among women. Although women use more snuff than before, it is still men who use it the most. 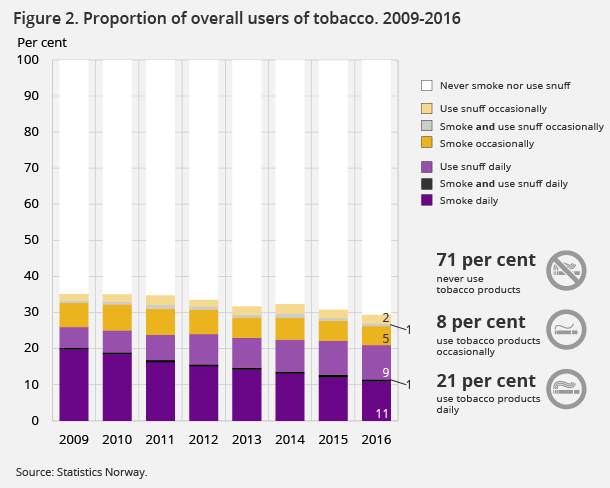 The older smoke, the younger use snuff

Fewer people smoke now in most age groups, but the trend differs somewhat between people above and below 44 years. The decline is greatest among young people aged 16-24, where only 3 per cent smoke daily, while the corresponding figure for people aged 45 and older is 20 per cent. 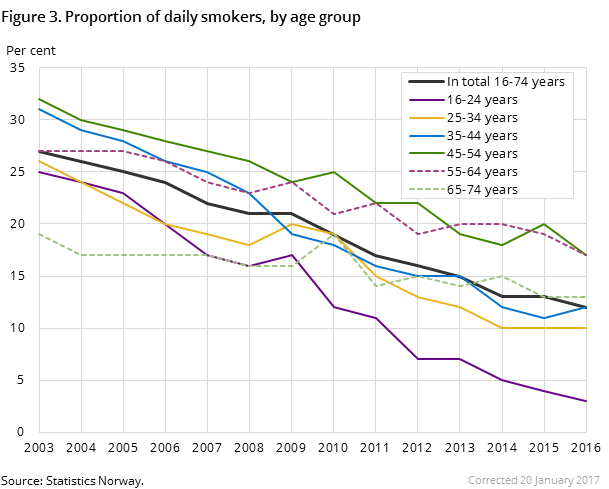 People’s use of tobacco varies with level of education, and people with a higher education smoke the least. The largest decrease is among people with education at a primary/lower secondary level. One out of three in this group smoked in 2006, but only one out of six in 2016. There was little disparity between educational groups for the use of snuff in 2008, but this has changed over time. Today we see clear disparities, and in the same way as for smoking, those with the lowest education use the most snuff.

One out of three use snuff when they stop smoking

Of those who have stopped smoking daily, one out of three said they used snuff. This is an increase of 13 percentage points from 2006. Of those who used snuff to stop daily smoking, three out of four still use snuff daily or occasionally. 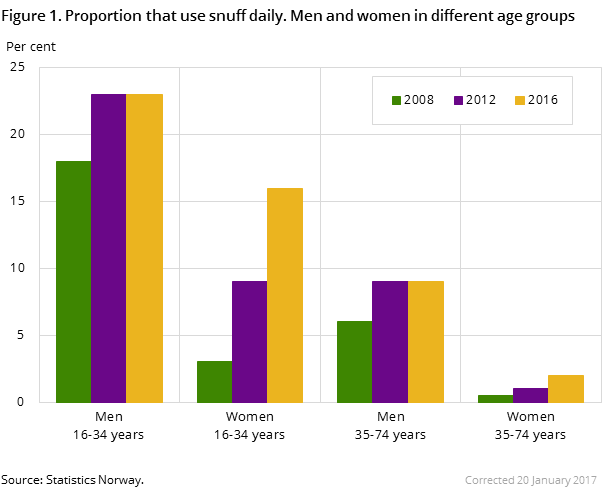 From 2014, Statistics Norway has decided to estimate weights to adjust for possible biases introduced by non-response. Using weights will affect the numbers somewhat, but the trend we have seen over many years will remain unchanged, even with weighted figures.

Examples of weighted and unweighted figures for two years is available in About the statistics.