Norwegian industrial managers report a further downturn in the total production volume in the third quarter of the year. There is low numbers of new orders and major uncertainty related to the coronary pandemic. The general outlook for the four quarter of 2020 is characterized by pessimism among the majority of industry leaders, but a lesser extent than in the previous quarter.

The total industry employment also shows a decline in the third quarter of 2020. The decline is related to the comprehensive measures against the spread of infection that were implemented this spring. Lower employment is reported for both capital goods and intermediate goods, while producers of consumer goods report higher employment in this quarter.

The decline in new orders among producers of capital goods is partly related to the fact that there have been few new oil and gas projects on the Norwegian shelf in the last quarter. The low oil price has also contributed to an order drought for the supplier industry from the global oil market. The economic downturn among Norway's most important trading partners has contributed to lower demand for Norwegian export companies. Most producers of intermediate goods mainly sell their products to the export markets and they are thereby particularly affected by the fall in new orders from the export markets.

There is still growth in the price level both in the home and export market for overall manufacturing. Producers of consumer goods and intermediate goods, in particular, report increased prices for sales to the domestic market. Prices in the domestic market for capital goods were unchanged compared with the second quarter of 2020. Price growth in the export market is reported for both intermediate goods and consumer goods, while prices declines are reported for the producers of capital goods.

Expecting further decline in the fourth quarter of 2020

The general outlook for the fourth quarter of 2020 is still affected by the Norwegian and global measures against the coronavirus pandemic. However, this pessimism is not as strong as it was in the third quarter of the previous survey. There are still a large proportion of industry leaders who report that the pandemic is the reason for the pessimism expressed in the index for the general outlook for the coming quarter. The general assessment is most negative among producers of capital goods and intermediate goods, while producers of consumer goods have a positive view of the outlook for the next quarter.

The industry leaders report that future investment plans are adjusted downwards and new orders from both the domestic and the export market are expected to decrease. The same applies to employment, which is expected to decline significantly in the fourth quarter of 2020 for manufacturing as a whole.

The industrial confidence indicator is positive

The industrial confidence indicator in the third quarter was 1.7, (seasonally-adjusted up from -9.6 in the previous quarter. This is the first time since the third quarter of 2019 that this indicator has been positive, but it is still below the historical average of 2.9.

The industrial confidence indicator is positive for both the majority of producers of intermediate goods and consumer goods, while it is still negative for producers of capital goods.

Weak demand and strong competition are limiting the production

An increasing share of managers is reporting that weak demand and strong competition were limiting factors for production increased in the third quarter of 2020. At the same time there is a low percentage of leaders who report that the capacity of plant and supply of the lack of qualified labour is a challenge. 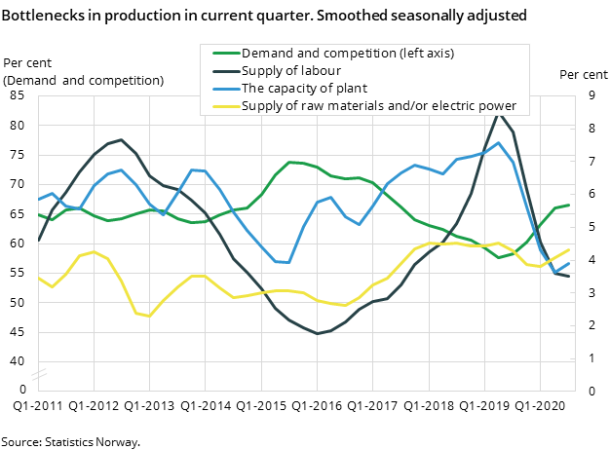 The survey data was collected in the period from 4 September to 20 October 2020.

Indicators for the3rd quarter of 2020: The business tendency survey for the second quarter of 2020 will provide a current picture of the economic situation for industry, mining and quarrying. This is achieved by mapping out business leaders’ evaluations of the economic situation and the outlook for a fixed set of indicators. The measurement period was from 4th September to 2th October 2020.