This statistics has been discontinued. Consult The Norwegian directorate of Immigration and  Utlendingsnemndas (UNE).

In 2013, the case processing time for asylum applications in the Directorate of Immigration (UDI) was 72 per cent shorter compared with 2010, and the corresponding reduction for expulsion cases was 80 per cent. In the Immigration Appeal Board (UNE), processing times were shorter in 2013. The reduction is among other due to fewer arrears. 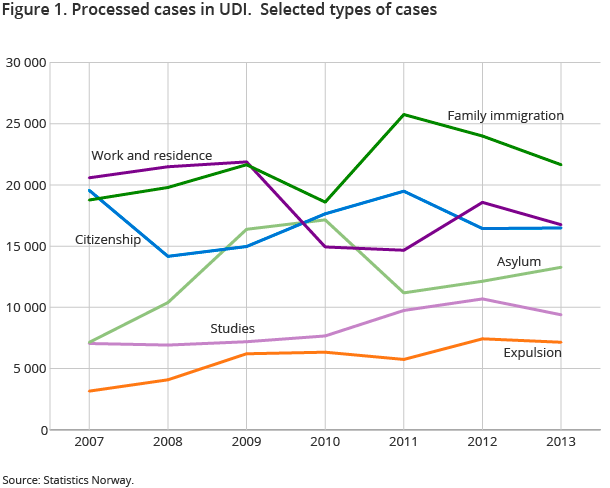 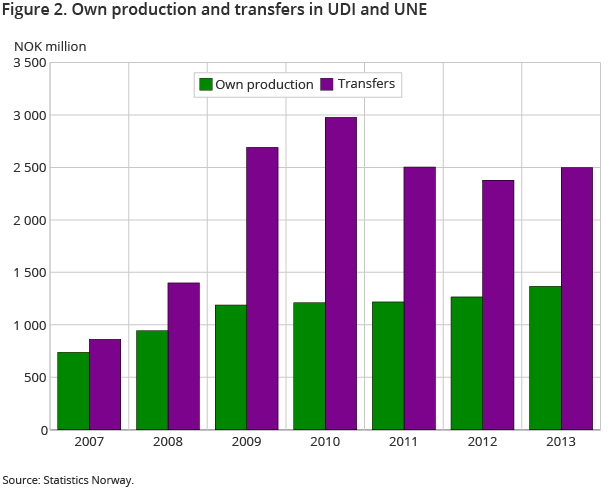 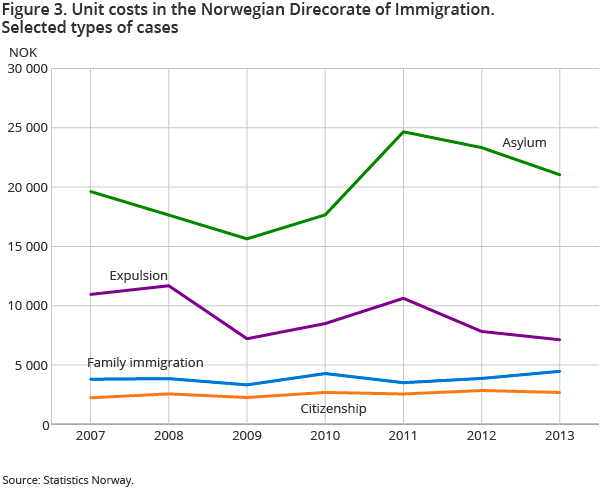 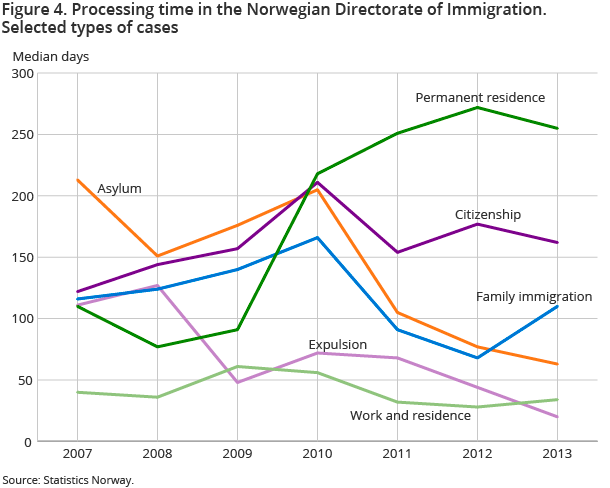 Lower expenses than a few years ago

Total expenses were approximately NOK 3.9 billion, of which NOK 2.5 billion was related to the purchase of residence places and other expenses for asylum seekers. In accordance with the development in the number of asylum applicants, the expenses increased considerably from 2007 to 2010, while the level has been relatively stable since 2011 and approximately 10 per cent lower than in 2010.

The total number of contracted man-years in immigration regulation in 2013 was 1 252, excluding long-term leave. This was made up of 923 man-years in UDI and 329 in UNE. In total, this is 9 more man-years than the previous year, with a decrease of 32 in UDI and an increase of 41 in UNE.

Unit costs for asylum applications down 10 per cent

UDI processed 12 600 asylum applications in 2013, which is 1 1 00 more than the previous year but lower than in the peak year 2010 (16 500). For asylum cases, the unit cost was NOK 20 351 in 2013, or approximately seven times higher than the average for the other case types. For the second year in a row, the unit costs for processing asylum and expulsion cases were reduced, but remain at a higher level than the years before. The decrease from 2012 was 10 per cent for asylum cases and 23 per cent for permanent residence cases.

Fewer cases processed in UDI than in 2012, but huge increase in UNE

The total number of cases processed by the UDI in 2013 was 95 500. This is a decrease of 5 300 cases from 2012, and just over the 2010 figure. The number of asylum cases fell slightly, while the greatest fall was for family immigration cases.

A total of approximately 22 600 cases were processed by UNE in 2013; an increase of 20 per cent or some 1 000 cases from the previous year. This increase is mainly due to more asylum cases. Since 2008, the number of cases processed by UNE has more than doubled.

Immigration regulation in StatRes only covers the Norwegian Directorate of Immigration (UDI) and Norwegian Immigration Appeals Board (UNE). Related indicators include figures for the activities in the International Police Immigration Service, the police districts and the foreign service missions, but these costs are not included in the cost and man-year statistics. For a more detailed description of the terms and a breakdown of the areas of responsibility in the immigration administration see About the statistics.