Population changes in the municipalities, 1951-2013

As from 2014 the statistics is publised with Population and population changes.

The overview of population changes in the municipalities since 1951 is now updated with figures for 2012. The population is still increasing and the growth was 1.3 per cent last year. This is the second highest percentage growth since the 1920s, and one of the highest in Europe. 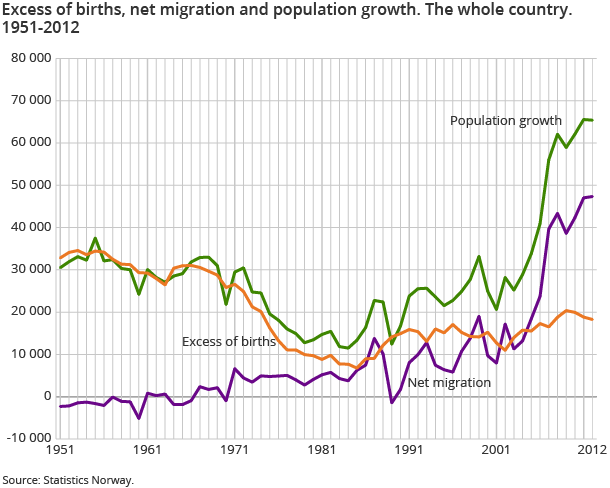 Rogaland, Akershus and Oslo had the highest growth in 2012

The population changes in the counties and in some municipalities can vary considerably from the national average. There may be factors other than demographic reasons, such as decisions on regional development, power development, location of asylum centres, etc. In addition, figures for municipalities often vary from one year to another due to random circumstances.

Changes in municipal boundaries cause complications

The figures in the tables dating back to 1951 relate to the municipal borders in existence at any given time. The numerous and often extensive local regulations in the period, particularly in the 1960s, make comparisons over time difficult in many municipalities, especially in relation to population numbers and totals such as number of births, deaths, in-migrations and out-migrations.