The population in Norway grew by 8 829, or 0.17 per cent in the first quarter. This is the lowest population growth in the 1st quarter since the EU’s internal market expanded in 2006. 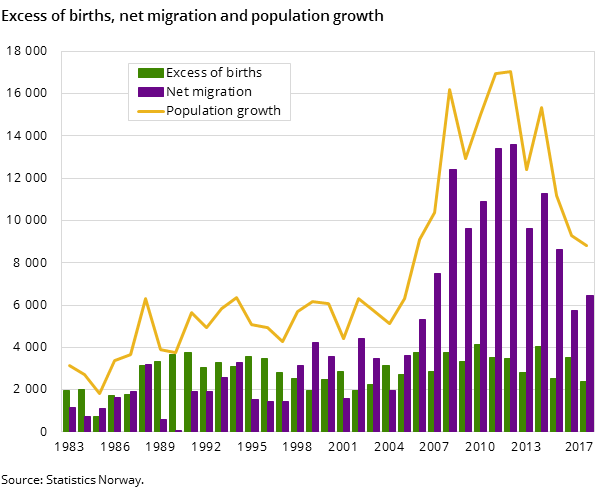 A lot of Norwegian citizens emigrated

Oppland, Møre og Romsdal and Telemark were three counties with a population decrease in the 1st quarter. All other counties had a population growth. In Oppland, there was a birth deficit and a negative internal in-migration. In Møre og Romsdal there was a negative internal in-migration. All counties had positive net migration from abroad.

The highest percentage growth in relation to the population was found in Troms, with 0.4 per cent growth. The main reason is high immigration. Akershus and Oslo were also two counties at the top of the list. A total of 3 300 new inhabitants immigrated to Oslo from abroad, but the net migration was relatively low due to a lot of internal out-migration from the county – about 9 900 this quarter. Akershus had high net-migration, both internal and from abroad.

Figure 3. Net migration. Internal and from abroad, per thousand of population 1st quarter 2017

Some medium-sized cities, like Kristiansund, Molde, Porsgrunn and Arendal, also had a population decrease in the 1st quarter.

Persons staying in the country for less than six months are not registered as resident in the country and are therefore not included in these figures. More than a third of the emigrations last year concerned people that the Tax Administration has decided have emigrated. These are persons without a residence permit or persons who have emigrated a long time ago without reporting it to the authorities.