Statelessness: many worldwide, few in Norway

Around 2 400 stateless persons live in Norway, most of whom are refugees. Worldwide, the figure is approximately 10 million, according to the United Nations High Commissioner for Refugees (UNHCR). The biggest problem for stateless persons with a residence permit in Norway is the lack of passport, while those in many other countries have considerably greater problems, often facing discrimination and almost total exclusion from society.

There are relatively few stateless persons in Norway: 2 425 at the start of 2016. However, the number has fluctuated considerably from year to year, mostly due to immigration and naturalisation. The peak was reached in 2011 at just over 3 000, as shown in Figure 1 and Table 1.

Norwegian-born to immigrant parents: born in Norway to two foreign-born parents, and with four foreign-born grandparents.

As a whole, these two groups are often referred to as persons with an immigrant background.

Refugees and family immigrants of refugees

Refugee: a person who has been granted a residence permit subsequent to an application for protection (asylum). Refers to those granted residence on humanitarian grounds, protection, collective protection, or as a resettlement.

Residence on humanitarian grounds is granted to persons who need protection or are in a vulnerable position.

Resettlement refugee: a person who is not in their native country, and is transferred to a third country in line with an official decision, normally in cooperation with the United Nations High Commissioner for Refugees (UNHCR).

Collective protection covers refugees and their families who are fleeing war (in Norway this term has mainly applied to refugees from Bosnia and Herzegovina).

Primary refugee: a person who has been granted asylum or residence on humanitarian grounds, as a resettlement refugee or as a person who belongs to a group with collective protection.

Family immigrant: a person who is granted a residence permit because they have a family member (reference person) in the host country. Covers family reunification, expansion/establishment, accompaniment (where someone accompanies another family immigrant), family ties and unspecified grounds relating to family.

Not included: asylum seekers who are awaiting a decision on protection (asylum) and residence in the country are not counted as persons with a refugee background. 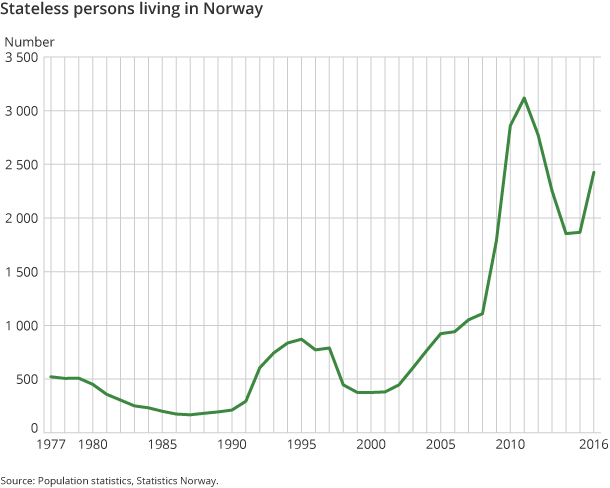 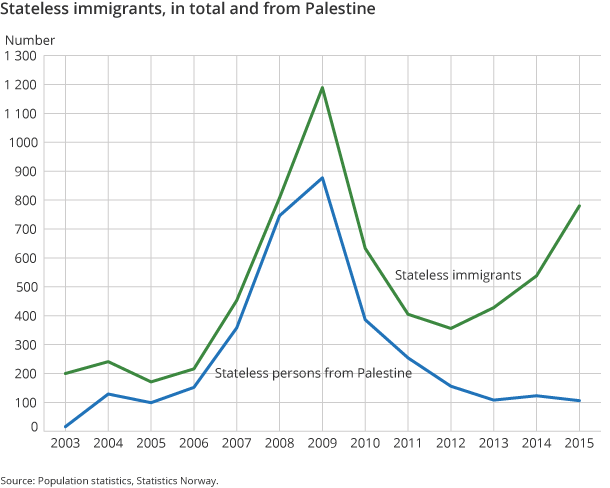 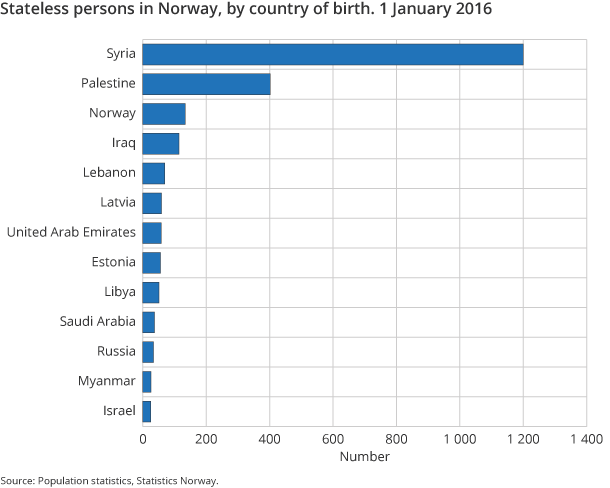 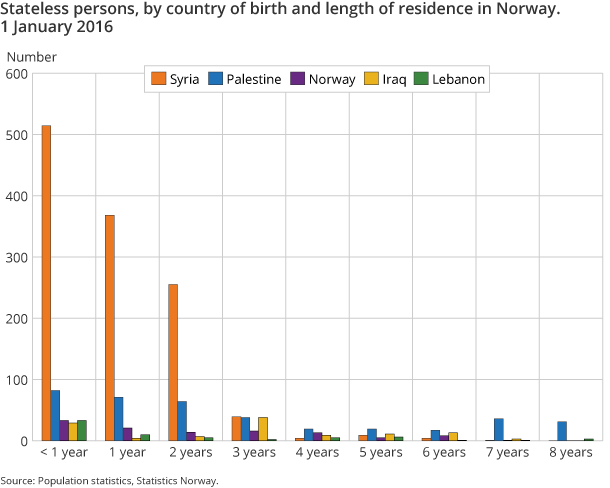 The definition of a stateless person according to the 1954 Convention relating to the Status of Stateless Persons (UNHCR 1954) is “a person who is not considered as a national by any state under the operation of its law”. In addition to its responsibility for refugees and internally displaced persons (IDPs), one of UNHCR’s mandates is to combat statelessness. The organisation recently adopted an action plan to bring an end to statelessness within ten years (UNHCR 2014).

Statelessness can have many causes, such as lack of documentation of country of birth and parents, various types of discrimination and the creation of new states and dissolution of old states. Statelessness may also be due to the laws of a country. For example, nationals of some countries lose their citizenship if they remain outside the country for more than a certain number of years. Statelessness is often the result of a policy aimed at excluding people who are deemed to be outsiders, despite having strong ties to the country. In Norway, most stateless persons are immigrants or were born here to stateless immigrants.

Stateless persons with a residence permit in Norway are not eligible to vote in general elections, but can vote in local elections in the same way as other non-Nordic nationals if they have lived here for the three years prior to the election date (Election Act 2002). They cannot obtain a Norwegian passport or any other passport, but may obtain travel documents upon application. Stateless persons cannot stand as members of parliament, cabinet ministers, Supreme Court judges or hold certain positions, nor take part in compulsory military service. A report from the Ministry of Justice and Public Security states that "More rights and obligations that were previously associated with citizenship are now linked to whether the person is residing in Norway, registered in the population register, has legal residence and is actually in the country" (Ministry of Justice and Public Security 2016).

The main reason for the decline in the number of stateless persons in Norway in recent years is that many have become Norwegian citizens, as shown in Figure 5. In the years 2003 to 2015, 4 900 stateless persons – most of whom immigrated during the same period – were naturalised in Norway, see Table 1. Stateless persons over the age of 18 can apply for Norwegian citizenship if they “have resided in the realm for the last three years and have a residence permit of at least one year’s duration” (Norwegian Nationality Act 2015). Children of naturalised citizens can also apply, but they must have lived in the country for the preceding two years. This is considerably shorter than for most other non-Nordic immigrants, who must have lived here for seven years. For more statistics on Norwegian citizenship, see Pettersen (2015). 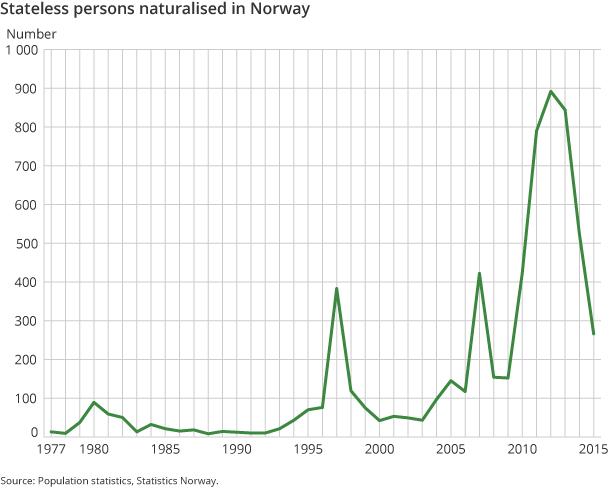 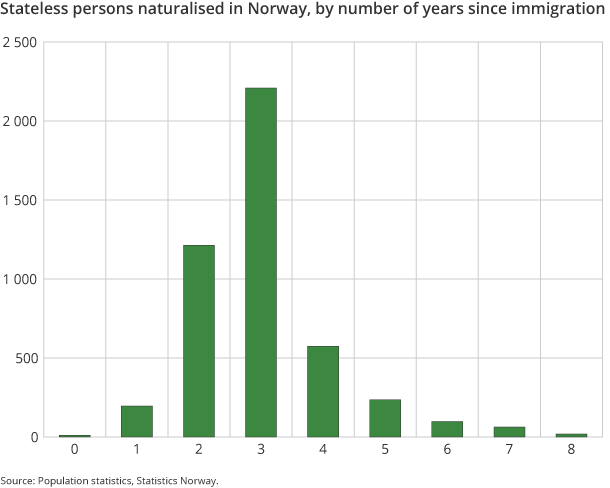 Not many stateless persons emigrate from Norway, with an average of just 30 per year since 2003 (Table 1).

How can statelessness be measured?

UNHCR is concerned with obtaining a better overview of the number of stateless persons in the world, in terms of scope, the background of stateless persons (country of birth, age, gender, employment, education), why they are stateless, how long they have been stateless, what problems they have and how they can be naturalised in the country they are living in, and what in effect defines a person as stateless in a country, such as lack of an identity card.

In the Nordic countries, the main sources of information on statelessness are the immigrant authorities and the population register. In Norway, we can find the number of stateless persons at a given time in the Central Population Register by counting the number of persons residing in Norway without a specified citizenship.

Most countries in the world do not have such registers, however, and other data sources therefore need to be used to obtain data on statelessness. The best source is censuses, which collect information about the entire population, including small sub-populations. However, censuses are normally only conducted every ten years or less frequently. Another important source of data on statelessness is interview-based surveys, either of a random sample of the population or only of stateless persons. However, stateless persons are often scattered and are relatively few in number, which means that very few are likely to be included in a random sample. Many people are also confused about their actual status, particularly in poor countries. Some may also have a different view on their citizenship to that of the authorities, such as the Rohingya in Myanmar. The definition of citizenship varies from country to country.

Many stateless persons have applied for asylum in Norway, as shown in Figure 7 and Table 1, but they still make up a modest share of asylum seekers in Norway, with almost 6 per cent during the period 2007–2014 (UDI 2016). Statelessness does not automatically qualify a person for a residence permit in Norway, but in 2015, 88 per cent of all asylum applications for residence permits from stateless persons were successful. 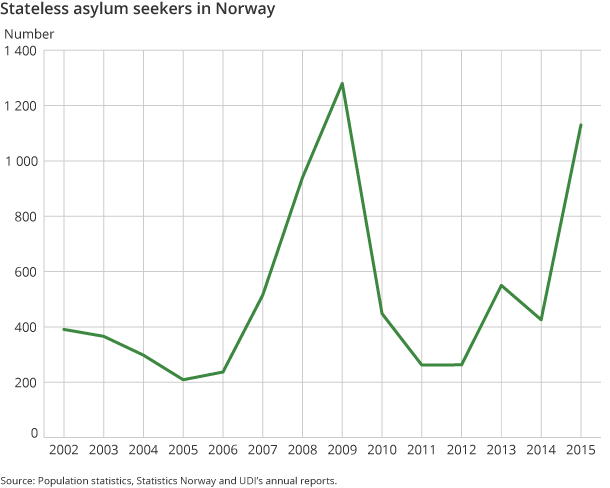 The number of stateless persons among those living in Norway without a residence permit, such as those without documentation, is unknown.

How many people in the world are stateless?

According to UNHCR (2014, 2016a, b), there are about ten million stateless persons in the world, a third of whom are children. This figure is based on information for 78 countries with a total of 3.7 million stateless persons. The figures for some countries are reliable, particularly those with good registers or censuses, but the estimates for many countries are rather uncertain, such as 20 000 in Kenya and 700 000 in the Ivory Coast.

Several regions that have extensive movement of people due to armed conflicts have large numbers of stateless persons. In Thailand, there are 440 000 stateless persons, many of whom are from neighbouring countries.

In 2015, 49 000 stateless persons in 20 different countries were naturalised. In 2008, the stateless problem was solved for 300 000 Bihari in Bangladesh. In Kenya, some groups of stateless persons have recently been given the opportunity to apply for citizenship.

Although the number of stateless persons in Norway today is modest, it may grow significantly, particularly if the number of refugees from Syria increases again.

Why are children born without citizenship in Norway?

There is a wide held belief that when a child is born in Norway it automatically becomes a Norwegian citizen, however this is not the case. In the period 1986–2015, 997 children were born in Norway without citizenship. These children had stateless parents when they were born. A child becomes a Norwegian citizen at birth if the father or mother is a Norwegian citizen (Norwegian Nationality Act 2015), regardless of whether they are resident in Norway or not. The principle that a child’s citizenship is determined by the parents’ nationality is known as jus sanguinis, and is applied in most countries in the world, but not in the USA, where all newborns are entitled to US citizenship (jus solis). UNHCR recommends that all children born in Norway should be granted Norwegian citizenship, as in Denmark, where the authorities grant Danish citizenship to children whose home is in Denmark. This is consistent with Article 7 of the Convention on the Rights of the Child, which states that all children from birth have the right to acquire a nationality (Office of the United Nations High Commissioner for Human Rights, 1989).

The government recently (21 October 2016) adopted new instructions on the conditions for Norwegian citizenship for stateless persons born in Norway. The instructions specify that they must have been permanently resident in Norway for three consecutive years preceding the application for citizenship. If the parents have a permanent residence permit, children can acquire citizenship within one year after birth (Ministry of Justice and Public Security 2016).

In many countries, stateless persons have problems acquiring birth certificates for their children and identity cards for themselves. Without such documents, it can be difficult to secure basic rights to health and education services, gain access to the labour market, travel, own land and other property, open a bank account, obtain a driving licence, inherit assets and marry. Stateless persons may also be arrested or expelled, and are often subjected to discrimination and harassment. They are often among the poorest in the population, as in Myanmar and Kenya. It is important that the human rights of stateless persons are protected, even though they are not recognised by any country.

Stateless persons in Norway have few problems compared to those in many other countries. A report by UNHCR (2015) notes, however, that Norwegian legislation has several gaps and weaknesses. Stateless immigrants are not necessarily granted residence in Norway.

Helge Brunborg is a demographer associated with the Division for Social welfare statistics, and a former senior researcher in the Research Department at Statistics Norway. (helge.brunborg@ssb.no)

Council of Europe. (1997). European Convention on Nationality, ETS No.166. Retrieved from http://www.coe.int/en/web/conventions/full-list/-/conventions/treaty/166

UNHCR. (1954). Convention related to the status of stateless persons. Retrieved from http://www.unhcr.org/protection/statelessness/3bbb25729/convention-relating-status-stateless-persons.html

UNHCR. (1961). Convention on the reduction of statelessness. Retrieved from http://www.unhcr.org/protection/statelessness/3bbb286d8/convention-reduction-statelessness.html

UNHCR. (2016a). Statelessness Around the World. Retrieved from http://www.unhcr.org/statelessness-around-the-world.html

UNHCR. (1989). Convention on the Rights of the Child. Retrieved from http://www.ohchr.org/EN/ProfessionalInterest/Pages/CRC.aspx