A stable immigration count, fewer births, and an ageing population. These are among the tendencies showcased by the updated annual and quarterly data from Statistics Norway’s population statistics.

Net immigration for 2019 came in at 25 300, which is a big rise from 2018’s figure of 18 100. Do note, though, that much of this increase is due to special circumstances with regards to the registering of emigrations in 2019. These resulted in the registering of about 5 000 fewer emigrations than would have been the case under normal circumstances and relate to non-Nordic EEA citizens.

Another figure to see declines in recent years is the number of births. The post-millennium peak were the 61 800 births registered in 2009, but a steady decline over the following years has now been marked by another low of 54 500. The excess of births, meanwhile, was 13 800. 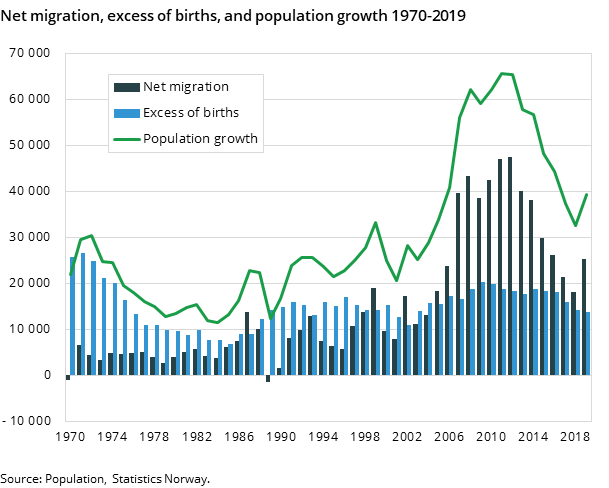 Please note that the number of emigrations by decision in the National Population Register declined sharply in 2019. There were two reasons for that: An internal reorganization which had temporary consequences for the allocation of resources to the control work, and a need to go through the procedures. If the percentage of decision-based emigrations had been the same in 2019 as in the three preceding years, approximately 5 000 more emigrations would have been registered – and the number of residents at the end of the year would have decreased accordingly. This calculation is relevant only for citizens of non-Nordic EEA countries – among others 1 700 Poles and 870 Lithuanians. For citizens of Norway, the other Nordic countries and third countries, the variations in the percentage of emigration decisions is within what one could reasonably expect. Geographically, it looks as if the consequences of the missing emigrations are distributed evenly within Norway. In the 2019 quarterly statistics, the most significant impact occurs in the 4th quarter.