Popular names from the 2000s topped the name statistics last year. In the top ten for the year, we now find several well-known sports names.

‘Emma stems from German and means ‘whole’ or ‘universal’. The previous Emma wave peaked in 1880. Then it all but disappeared in the period 1940 to 1970, before steadily rising in popularity until exploding in 2003’, says Jørgen Ouren, senior adviser in Statistics Norway.

Prior to this, Emma was extremely popular throughout the Western world and dominated in Sweden in the 1990s.

Jakob is a Hebrew name of unknown origin.

‘Jakob has been used in Norway since the 1300s and is a typical biblical name. The fact that the second most popular name of Lucas is also a biblical name suggests that the trend for biblical boys’ names is not over. From 1.5 per cent around 1950, the proportion rose to 22.5 per cent in 2006. Since then it has declined slightly and is now 20.3 per cent’, says Ouren.

How many people have the same name as you? Search here. 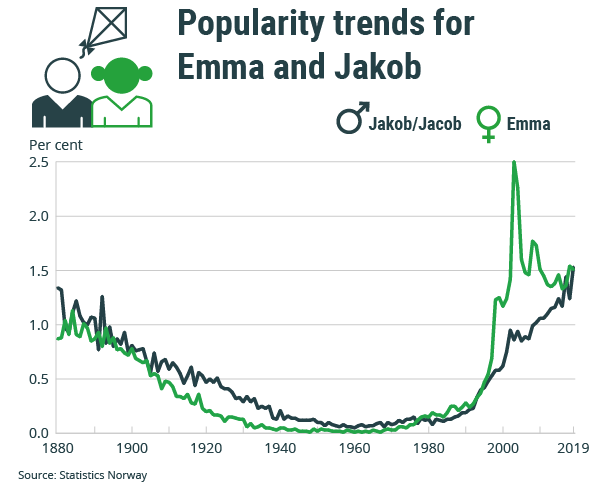 In the 2019 top ten, we find several well-known names from the contemporary world of sports.

Ada continues to grow in popularity and is now in 6th place. The name Ada was popularised through the footballer Ada Hegerberg, who was the first recipient of the Ballon d’Or Féminin, an award for the world’s best female football player. In 2019, 291 girls were named Ada.

The other new entries in the top 10 are Sofia and Ingrid. The only new entry for the boys is William, which was the favourite a few years ago before dropping out of the top ten completely last year. The popularlity of names goes in waves, and this sometimes happens. Henrik peaked in the 1990s, before losing popularity, and then suddenly rising again.

‘Many will probably recognise several of the names of the well-known Ingebrigtsen brothers from the 2019 top ten. Here we find, among others: Henrik, Filip and Jakob. The brothers’ youngest sister is Ingrid, and this is also in the 2019 top 10’, says Ouren. 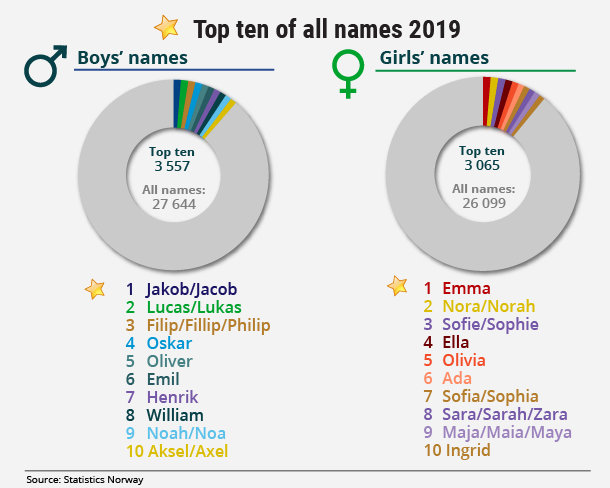 The use of middle names has stabilised at 53.2 per cent. In addition, 8 per cent were given a hyphenated surname, which is a slight decline. Since there are so many ‘surnames’, the proportion with more than one first name is decreasing. Among the girls, 21.7 per cent have more than one first name, and the corresponding figure for boys is 19 per cent. This includes 0.6 per cent with a hyphenated name.

The top names in the counties vary. Although Jacob is most widely used throughout the country, it is only in Akershus, Hordaland and Troms that it tops the list. Mohammed in its various spellings is top in Oslo. Oliver takes the number one spot in Hedmark, Henrik in Telemark and Aust-Agder, while Filip is the favourite in Rogaland.

Emma is the favourite in seven counties, but is 10th place in Oslo, where Ingrid takes the top spot ahead of Astrid. Maja is most popular in Østfold and Sogn og Fjordane.

Here you will find tables of counties and a selection of municipalities and areas. Note that the old county names and boundaries are used in the tables.

Sofie most popular as second part of first name

Seven per cent of the girls have first names with three letters. This is the highest level since 1972, when Ann, Siv and Gro dominated. Ada is now in the lead, ahead of Mia and Eva. Boys’ names from the Bible, such as Jakob, are used by 20.3 per cent.